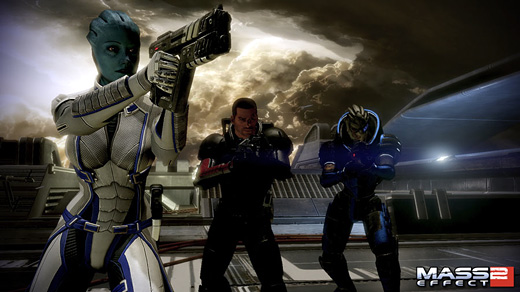 HIGH Getting the long-awaited resolution to a massive loose end.

WTF Who knew Legion was a hardcore gamer?

It's been about nine months, give or take, but BioWare has at long last delivered closure to what was one of the most unsatisfying and unpleasant sequences in Mass Effect 2: the intense cold shoulder Liara T'Soni gave to Commander Shepard.

While I'm certainly aware that not every player chose to romance Liara (if they chose to pursue a romance at all) she was my character of choice, not only during cutscenes on the Normandy, but through the entire adventure. As soon as Shepard was able to free her in the first Mass Effect, Liara became a core component of my experience until the end. She was my trusted teammate, my powerful Biotic, and my intimate partner.

It was for these reasons that Mass Effect 2's abrupt, ridiculously truncated handling of Shepard and Liara's reunion felt not only implausible, but almost insulting thanks to how little attention it was given. The developers kept telling players that choices matter; that how the game is played will affect the entire trilogy. I believed in that promise, and felt bitterly disappointed when it wasn't made good. After all, shouldn't my professed virtual commitment and continued fidelity actually count for something?

Without spoiling anything, I'm quite glad to say that with the Lair of the Shadow Broker DLC, BioWare has now addressed my concerns in a very complete, fulfilling way.

After receiving some information on the infamous, elusive Broker, Shepard returns to the aloof Liara and convinces her to help bring the villain down. This reconnection is a bit awkward at first, both in terms of how Liara acts as well as how the mission flows, but before long the DLC hits a rhythm and everything falls into place.

While I'm still not a fan of Mass Effect 2's increased emphasis on combat, the set pieces here actually make a lot of sense and feel natural. I appreciated that the shooting didn't come off as shoehorned as it has in the past, and some of the environmental work is fairly stunning. The strong visuals make the action feel like a more organic part of the story and engage the player in some superb atmosphere.

After a suitably intense boss encounter, an extended denouement is available for players (like myself) who craved additional character work in order to make sense of what happened to Liara. With options for text, video and conversation, any fan who loves this universe will eat it up. After all, aren't the story and characters the real reasons why anyone plays a BioWare game? Unlike the other DLC that came before it, Shadow Broker understands this and delivers in spades. I couldn't have been happier.

I can't say for certain that players who may made different choices than I did will see the same content  (I play the extreme Paragon path) but I can say that what transpires at the end finally feels like a logical, believable progression of events, and has definitively closed the unresolved Liara situation to my satisfaction. Shadow Broker is the best Mass Effect 2 DLC by an interstellar mile. Rating: 8.5 out of 10.

The latest DLC expansion for BioWare's space-based magnum opus, Lair of the Shadow Broker, was released on September 8th and is available for 800 Microsoft Points. ($10.00) This DLC includes a multi-part story-based mission, five Achievements, at least two researchable pieces of equipment, a substantial archive of character data, and a few other things.

Disclosures: This game was obtained via paid download and reviewed on the Xbox 360. Approximately 2 hours of play were devoted to the single-player mode, and the content was completed. There are no multiplayer modes.

Parents: According to the ESRB, this game contains blood, drug references, sexual  content, strong language, and violence. Parents, let's make a long story short-This is a mature game aimed at mature players, full stop. Nothing else needs to be said.

Deaf & Hard of Hearing Gamers: You should be just fine with this new mission. Dialogue is accompanied by subtitles, and there are no new additions to the gameplay formula that employ significant auditory cues. If hearing impaired gamers are fine playing through the rest of the adventure, this DLC won't pose any problems.

I’m playing ME2 for the first time in preparation for ME3 and was lucky enough to get a copy with this DLC bundled in (for PS3). LotSB fits seamlessly into the main game. I played it the first time I got to Illium right after Miranda’s loyalty mission and didn’t even realize it was DLC. The pacing was a great balance of intrigue, combat, and character for my tastes. I thoroughly enjoyed it! If you have reasonable Paragon scores and an ME1 romance with Liara imported, be ready to hit L2 (cinematic Paragon action) in a few cutscenes, especially in… Read more »

I think Bioware still struggles a bit with this whole DLC stuff, but judging from Zaeed to Kasumi to Liana there’s a clear improvement to be seen. Zaeed’s DLC was a standard run and gun mission and rather boring. Kasumis stolen memories was already much better and brought in something new that was not in the main game with it’s James Bond-like plot. The shadow broker DLC is my favorite so far, being a lightyear ahead of Zaeed’s and also better than Kasumi’s. My only complaint is that it’s rather short. Unlike Kasumis stolen memories it also makes some sense… Read more »

Hey Broodwars. Thanks for your comments. I actually agree with you with just about everything you said… this DLC would have absolutely made a lot more sense in the main game, and the rewards would make more sense for someone who has yet to finish the game for the first time. It actually does bother me a bit (or maybe, more than a bit) that BioWare (with ME2 especially) doesn’t understand the concept of post-game DLC. As someone who completed the game months ago, it feels weird to jump into a new piece of DLC and have the characters talk… Read more »

Eh, while I enjoyed the Shadow Broker DLC, I really didn’t think it was anything special. In fact a lot of the problems I have with the other DLC are present here as well. For instance, given that Liara is an old comrade, I figured that having Tali and Garrus with me would cause some interesting conversation. Tali was mentioned TWICE the entire DLC, and she didn’t even have any lines. The rewards you get are nice, but they’re rewards that are really only useful if you haven’t completed most of the game yet, so they fail as content for… Read more »

Good review, and I very much agree with the points made here. Hopefully Bioware is taking the attitude shown in LotSB to heart in ME3. I honestly felt in terms of pacing and feel it blew every single other mission in ME2 away, including the anticlimactic suicide mission. The loading screens felt less intrusive in this DLC than in the main game for some reason. Maybe it was just my imagination, but with the combination of actually seeming likely they appoached the mission without an “on rails shooter” attitude I just felt the entire experience was far more cohesive. It… Read more »