Is that Princess Amidala in the Shadows? 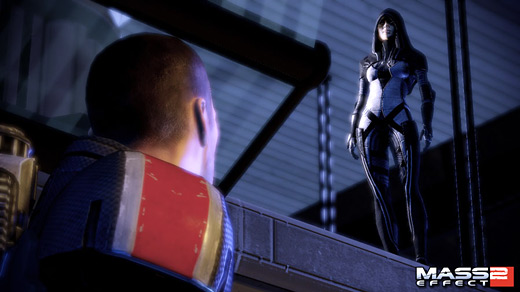 LOW Seven dollars feels a little steep for the amount of content.

WTF The firefight near the party doesn't cause any concern.

Much like mercenary-for-hire Zaeed, stealthy super-thief Kasumi is an additional member of the Normandy's crew who can be used in standard missions. Also like Zaeed, she doesn't quite fit with the rest of the on-the-disc team… when speaking to her onboard the ship, she recycles a limited amount of dialogue, and there's no close-up or choices when engaging her in conversation. It's disappointing, but those quibbles aside, she's an interesting new face with an unexpected mission.

After making contact with Kasumi, Shepard is tasked with infiltrating a swank dinner party hosted by an interstellar crook. The goal? Breaking into his secure vault and recovering a certain object. There is definitely an Ocean's Eleven "heist" vibe to the proceedings, and although it's not perfect, it's an unusual and welcome change of pace. (ProTip: once inside the vault, pay special attention to its contents. There are two particular display items of interest.)

Although the common consensus estimates the playtime of the mission to be around an hour, my own personal completion time was a little less than that. Even so, I enjoyed Stolen Memory, and Kasumi herself is sure to become a fan favorite thanks to her shadowy persona, ability to disappear, and potent backstab attack. If you're quiet, you can almost hear the fanfics being written…

When all was said and done, I only had two issues with Stolen Memory. The first is that after having totally completed Mass Effect 2 a while ago, there wasn't any opportunity for me to use Kasumi after the new mission was over. That one's on me. The second is that I couldn't help but feel that the price of $7.00 was a little inflated. Kasumi is certainly a fine character and I liked the new spin on mission design, but even with all that taken into account, $7.00 for 45 minutes didn't quite add up. Mass Effect die-hards will certainly want to invest, but more casual fans of the series might want to think twice before purchase. Rating: 7.5 out of 10.

The latest DLC expansion for BioWare's space-based magnum opus was released on April 6, and is available for 560 Microsoft Points. ($7.00) The Kasumi — Stolen Memory DLC pack contains a new character, their loyalty quest, a new weapon, a new research project, an Achievement, and what might be the best thing of all, eveningwear for Commander Shepard. (Really, it's nice.)

Disclosures: This game was obtained via paid download and reviewed on the Xbox 360. Approximately 45 minutes of play were devoted to the single-player mode, and the content was completed. There are no multiplayer modes.

Parents: According to the ESRB, this game contains blood, drug references, sexual  content, strong language, and violence. Parents, let's make a long story short: This is a mature game aimed at mature players, full stop. Nothing else needs to be said.

Considering both Mass Effect games are relatively short (anywhere between 20-30 hours) an expansion would probably be a waste of time. If it takes BioWare long enough to make 30 hour’s worth of content for a main game then it’s probably better for them to just focus on ME3.

Well, I think we should have a humanity based expansion, with a trip to Earth, as it has been hinted at a few times.
I think it should involve alien racism, and some good choices to make.

I’m still undecided if I should get Kasumis DLC. I don’t plan on another ME2 playthrough, so my enjoyment would last less than an hour for which the asked price is indeed a bit steep.
[quote=Anonymous]I’m still holding out hope for a Mass Effect expansion in which you don’t play Shepard. C’mon, Bioware! Why not give us Mass Effect: The Liara Chronicles?[/quote]
Because Liara is boring? I would appreciate an expansion, but would prefer they focus all their attention on ME3.

I’m still holding out hope for a Mass Effect expansion in which you don’t play Shepard. C’mon, Bioware! Why not give us Mass Effect: The Liara Chronicles?

(Seriously, I’m surprised more game series — including Half-Life 2 itself — haven’t worked out what a brilliant device the original Half-Life had with its expansions. You save the main protagonist for the big games, and give the fans a little bit extra to sample in the meantime by filling in the surroundings.)

I hope Bioware has an Awakenings-length expansion in store for us so that we can spend more time with all this extra content. I don’t intend to replay the game but I’d like to experiment a bit with Kasumi’s stealth attack, the arc projector, etc. I have two of those anomaly missions banked for a rainy day just in case no such expansion is on the horizon.

Everyone thinks that the length of this DLC is way too short, whilst I think it is (and the problem could have been fixed by some interesting dialogue back on the ol’ SR2) i think people are missing the point somewhat. If there was an equivalent mission in ES IV: Oblivion, you would rob the house, and leave with a small armory, whilst in ME2, instead of giving you weapons that are either weak, therefore pointless, or overpowered and ruin the game (i don’t use SMGs…), they give you a character that gives insight during missions, tells you short stories,… Read more »