The Spiritual Successor to a Long-lost Friend 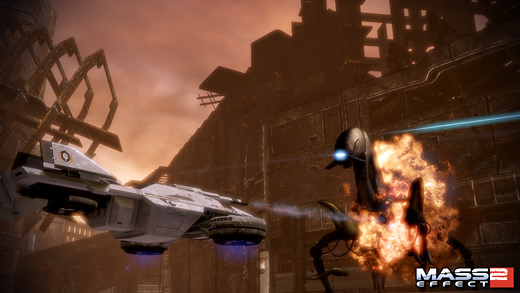 HIGH The return of a sorely-missed planetary vehicle option.

WTF Why (oh why!) was this not integrated into the main game?

The Firewalker Pack consists of five vehicle-based missions which introduce the Hammerhead hovering scout craft. Although it looks vaguely like Mass Effect's much-maligned Mako, the key difference is that instead of being a ground-based armored affair, it's airborne and nimble. Players will find that it zips to and fro effortlessly, and has powerful jump jets that launch it massive distances, both horizontally and vertically. Although I definitely count myself a fan of the Mako, there's no denying that the Hammerhead is a thrilling (and much improved) ride.

The missions designed for the Hammerhead are fairly simple and straightforward. Given its speedy, aerial abilities, it's no surprise that each is basically a linear track designed for zooming around with height variations for leaping. The goals for each are equally simple. One mission has players racing down an icy canyon towards a series of warming checkpoints. Another has players jumping from surface to surface over a lava flow, two feature small-scale hover combat against the Geth, and so on. Rather than role-playing, the focus here is on vehicle dynamics.

These missions are definitely a good starting point, but it should be made clear that the Hammerhead can only be used in very specific circumstances. It does not have the "land on any planet" functionality of the Mako, so players expecting to be able to cruise around previous locations will be disappointed. Also, players can't park the vehicle and exit at will. Although there are a couple of opportunities to exit and explore very small interior environments on foot (without combat, shockingly) it's clear that this addition is not holistically meshed into the Mass Effect world the same way that the Mako was.

Although the implementation is very limited and the series of five missions can be completed in an hour or less, I greatly enjoyed taking the Hammerhead for a spin—doubly so, since I felt that Mass Effect 2's removal of both Mako and planetary exploration was a huge error. Rather than being scrapped, all it needed was a tune-up, and seeing the Hammerhead in action only reinforces that feeling. If the final game of the trilogy could combine the exploration elements from the first with the mobility and control of the Hammerhead, that would be the optimal solution for everyone involved, I think. Rating: 8.0 out of 10.

The latest DLC expansion for BioWare's space-based magnum opus was released on March 23, available only to players who've activated the EA-exclusive "Cerberus Network" online system. Players connected online without EA's Cerberus Network will not be able to obtain this content.


Disclosures: This game was obtained via free download (after purchase of access to the Cerberus Network) and reviewed on the Xbox 360. Approximately 1 hour of play was devoted to the content, and the content was completed. There are no multiplayer modes.

Parents: According to the ESRB, the game (not this DLC specifically) contains blood, drug references, sexual content, strong language, and violence. Parents, let's make a long story short: It's a mature game aimed at mature players, full stop. Nothing else needs to be said (although this content in particular is pretty harmless.)

Deaf & Hard of Hearing: You should be aware that the same caveat for the main game applies: there is an audio cue with no visual indicator alerting players to hidden anomalies when scanning planets. Aside from that issue, there are no audio concerns relating specifically to this add-on. No significant auditory cues are present during gameplay, and I encountered no problems playing without sound.

I was also disappointed by BioWare’s decision to cut the Mako and reduce planetary exploration. It seems to me like they over-reacted to criticism of the first game. In the third installation, I hope they stick to their guns a little more.

And why wasn’t the Hammerhead included in the main game? I also found it to be ridiculously fun, to the point of wishing I could replay its missions. It might be the only reason I do a third play through.

I agree with the exploration, but the combat needs improvement. The Guided missiles will not always target the target you want, even if it is in the red box that covers enemies, and as a result they miss both your target and it’s intended target even if you and the enemy are not moving. The extra credits and materials you find and collect are not added to your account, so you will loose credits on fuel and probes, but only a vary small amount, nothing to worry about. The TANK can be taken out easily by a hand full of… Read more »