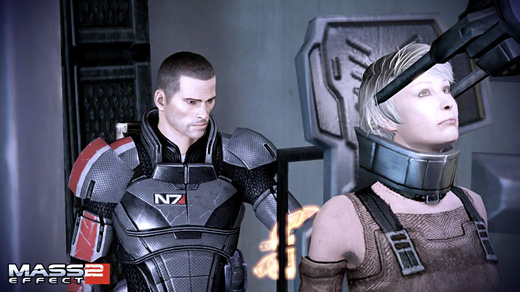 HIGH I can finally pack my copy of Mass Effect 2 away.

WTF No teammates during the entire DLC? Really?

, was released on March 29th and is available for 560 Microsoft Points. ($7.00) This DLC includes a single story-based mission, three Achievements, and at least two researchable pieces of equipment.

So, the extended saga of Mass Effect 2 has finally come to a close thanks to the release of the final DLC, Arrival. Unfortunately, it can't really be said that BioWare has saved the best for last. Out of the myriad extra things to be purchased for the game, top honors must surely go to the preceding add-on, Lair of the Shadow Broker. However, completists (like myself) will likely pony up the price of admission regardless, but the fact remains that Arrival is definitely a lightweight—perhaps even superfluous.

Arrival’s mission begins with a request for Shepard to enter a hostile region of the universe controlled by the Batarian race. Apparently, a deep-cover human scientist has discovered a piece of evidence suggesting that the horrific Reapers are much closer to making an appearance than anyone realizes, and the information must be recovered.

To reveal any more about the story would cross over into spoiler territory, although I will say that there are no surprises here. In fact, there's really only one "big" story event that occurs, and it seems as though it won't pay off until Mass Effect 3. This particular event was not portrayed in any real dramatic sense, and I felt no hesitation when asked to make what appears to be the DLC’s only major choice. I personally have doubts as to whether this choice will be an important factor in the trilogy’s conclusion, but that remains to be seen.

In terms of what Arrival delivers apart from this lukewarm plot point isn't much. Essentially, the entire mission is one long corridor shoot-out that will take players no longer than two hours to complete, at the most. The combat is as solid as it ever was, but for players who want more to do than shoot things, I'm sad to say that there is no interaction with the team on the Normandy whatsoever—in an unexpected move, Shepard goes solo. I was a bit surprised to see that the cast of characters BioWare has spent so much time on don't play a role here whatsoever, and found it disappointing to say the least.

After spending an hour and a half going through Mass Effect 2: Arrival from start to finish, I'm a little puzzled as to why BioWare felt like this was a good way to close the books on Commander Shepard’s second game. Corridor shooting is not something I think a lot of players were hungry for more of, and the story elements in this mission carry little significance or emotion. For a piece of DLC that offers so little, $7.00 seems steep. Save some hard-earned money and watch the videos of it on YouTube instead… the most relevant bits can be seen in a minute or two, and those Microsoft points can instead be spent on something more substantial. Rating: 4.0 out of 10.

Disclosures: This game was obtained via paid download and reviewed on the Xbox 360. Approximately 1.5 hours of play were devoted to the single-player mode, and the content was completed. There are no multiplayer modes.

Parents: According to the ESRB, this game contains blood, drug references, sexual content, strong language, and violence. Parents, let’s make a long story short—this is a mature game aimed at mature players, full stop. Nothing else needs to be said.

Point Anchorage for Fallout 3 also switched to combat instead of RPG, and it also failed to create the same magic. I get the studios are trying to change up the pace, but sometimes if it isn’t broken, don’t fix it.

Also, with Mass Effect 3 incoming, this pack seems like a way to introduce another DLC without any potential screw-ups to the overall narrative. AKA: a cash grab. But considering the good work Bioware does overall, fine by me.

While I still fundamentally disagree with your position on ME2, I find myself agreeing with this review. This is by far the weakest DLC out of the lot. Rather than re-engaging interest in the ME universe, the shallow experience leaves you feeling empty, and angry at what seems like a cynical attempt to squeeze the remaining life out of the product. And our wallets. ME2 was never an RPG, nor an out-and-out shooter, and to have judged it on the basis of it’s forerunner, rather than on its own merits, was a critical mistake on the part of this site.… Read more »

[quote=Jergal]Dear Bioware, Since youve spent now almost the entire second chapter of the Mass Effect trilogy wasting my time demonstrating how you can craft basic shooter combat that matches every other banal shooter game that saturates the video games market, it is naturally the last thing I want to be bombarded with in ME3.[/quote] Actually it doesn’t even achieve that — compared to Gears of War, or Uncharted, the combat isn’t exactly great; it’s just acceptable since it’s part of the overall RPG. Then again, like you point out, the game isn’t exactly buffed-up with RPG elements either, so what… Read more »

Honestly, I think it was a good summary of everything Bioware concentrated on most in ME2: boring, linear TPS combat. I spent 90% of my time in ME2 hiding behind boxes trekking through linear shooting galleries. Why is everyone so surprising this DLC would embrace that? It is a little disappointing that after Lair of the Shadow Broker, which was a massive step towards how Mass Effect should be done (even if still a little too heavy on the TPS gameplay based enemy spam). I mean, they added in an effective new power that wasnt second fiddle to shooter combat.… Read more »

There you go again, slandering the sterling reputation of the greatest game design studio of all time again, out of some childish need for attention, no doubt egged on by site administrators who are hellbent on destabilizing the foundations of the aggregate review score system. We see now only too clearly the true nature of the Gallaway AGENDA… LOLZ, just echoing Tims awesome readings from podcast 52.. but srsly Im almost done with it, pyro guys are a flaming OHK nuisance, and otherwise I agree with you. I think 4.99 wouldve been a better price. 3.99 would’ve been an excellent… Read more »

“ I was a bit surprised to see that the cast of characters BioWare has spent so much time on don’t play a role here whatsoever, and found it disappointing to say the least.”

As with most things BioWare these days, this is likely to reduce costs; having to bring back the voice-cast for a 2-hour DLC probably didn’t appeal to them. If people will buy it regardless of quality — as DA2 has proven — then why bother making the effort?