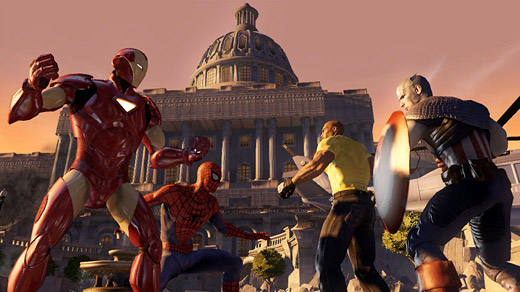 WTF What happened to the QA process?

As a big fan of both games and comics, it seems as though a merging of the two would automatically score big points with me—and that's not too far from the truth. Favoring Marvel more than DC, the first Ultimate Alliance was a direct hit in my eyes thanks to solid multiplayer and a huge cast of recognizable characters from the house that Stan Lee built. It had its flaws to be sure, but it was one of the first superhero games that I felt really nailed the source material. Three years have gone by since that game and Raven Software's substitute developer Vicarious Visions has delivered a direct sequel that still manages to be enjoyable in a mindless way, although it does nothing to eclipse its predecessor.

The game's premise is that there is a rift in the Marvel world over the issue of whether or not superheroes should register their identities with the government. I'm actually not familiar with the details since I wasn't buying the titles in question at the time, but the basics are easy enough to understand. How this plot is implemented is that at a certain point in the story, the player must choose between pro- or anti-registration factions. Like Captain America? Go anti. Prefer Iron Man? Go pro. Although I have to admit a certain level of incredulity at seeing Iron Man and his cohorts acting like goose-steppers while turning on characters they've spent their entire career being friends with, I can appreciate that it gives players a reason to go through the game twice. It's not exceptionally well-written or interesting, but it works.

In terms of gameplay, the title uses the same basic overhead dungeon-crawl formula that Marvel Ultimate Alliance employed to success the first time, with only minor structural differences in this installment—although most are appreciated. For example, players can now swap any member of their team of four out at any time. It's also possible to revive defeated teammates on-the-fly as well, meaning that long slogs back to the most recent save point are no longer necessary. Anything that alleviates drudgery is a win in my book, and these choices do just that.

Tweaks aside, the biggest addition to the formula are the "fusion" attacks. After earning a certain icon, any two characters can combine their powers to unleash a devastating, screen-clearing attack. It's kind of a neat idea in theory, although in practice it's not quite as impressive. Despite the number of potential combinations of heroes, there are really only three or so general types of attacks—not nearly as much variety as one might expect. Besides that, the developers have made sure to include several areas in each level where the enemies attack in such thick swarms that these fusions are basically required to survive and progress. Rather than feeling powerful or strategic, performing one of these team attacks feels more like a contrived gimmick. 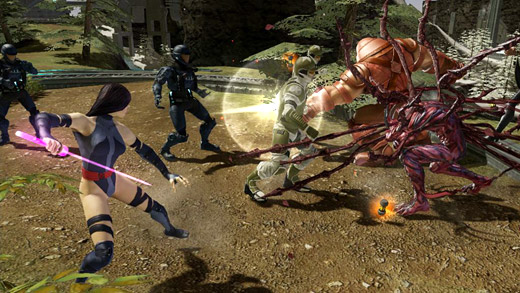 Overall, pushing through each level with my heroes of choice satisfied my basic need for wanton destruction and enemy pounding, so in this respect, Marvel Ultimate Alliance 2 justifies its existence. It's hard to not like bashing in heads with Captain America, or tripping fools with Daredevil. However, there are a few problem areas that hold Ultimate Alliance 2 back from matching the first title's ability to satisfy.

My biggest complaint is that the available characters included aren't very interesting or exciting. Featuring only twenty-five capes (four of which need to be unlocked, one downloaded) as opposed to the previous game's grand total of thirty-three, I never had a team that I felt totally thrilled about. Ms. Marvel? Penance? I can think of a dozen heroes I would've rather had than some of the ones that ended up being included. It doesn't help that many of the powers feel like carbon copies of each other, further reducing the unique qualities of the roster. There's a character DLC pack on the horizon that might help things, but it wasn't available at the time of review.*

Besides the lukewarm cast, there are a number of technical issues to be addressed. For starters, it's often very hard to see what's going on thanks to a camera that never feels as though it's in the correct position and the large number of characters onscreen with accompanying special effects. It was extremely common to totally lose sight of my character or find out that I was attacking one of my own teammates in the confusion.

Additionally, the framerate takes hits when the action starts to get heavy, and I encountered a surprising number of bugs during my playthrough. For example, I fell through floors and got stuck in architecture several times, continuing a save would sometimes require me to re-defeat bosses I'd passed, I saw popup text windows that wouldn't go away, and my characters would be unable to turn on more than one occasion—Wolverine isn't very effective if he can only face left. I also played the game cooperatively from the start, and was disappointed to find that the game only registered my partner being present for a fraction of the hours we logged. None of these things were game-breaking, but there were enough instances of weird occurrences and annoying glitches that the game as a whole felt as though it needed at least another month in QA.

Marvel Ultimate Alliance 2 basically accomplishes what it sets out to do, but doesn't move the series forward in any significant way, even feeling like a minor step back in certain aspects. Comic fans like myself might find some joy in returning to a universe and characters that we love, but there's no getting around the fact that when a fan's appreciation for the subject matter is taken out of the equation, there's really nothing to recommend this sequel over the game that came before it. Rating: 5.0 out of 10.

Disclosures: This game was obtained via publisher and reviewed on the Xbox 360. Approximately ten hours of play were devoted to the campaign, and the game was completed one time. All hours were spent in multiplayer mode.

Parents: According to the ESRB, this game contains mild language and violence. There is nothing particularly offensive or graphic in this title. The violence is basically superheroes beating up on super villains, with lots of fireworks and explosions happening. I'd be a lot more hesitant letting my son look at the actual comics than I would this game.

Deaf & Hard of Hearing Gamers: You shouldn't have any problems beyond the same issues that people with normal hearing will have. Subtitles are available for all dialogue, and the action on screen never relies on audio cues. You may not have any idea of what's going on thanks to all the clutter and a sub-optimal camera, but that has nothing to do with the ability to hear.

Good catch, that score was from a previous version of the review. The score’s been amended.

After reading the closing statement I expected a lower number, but I’m pretty certain that it’s not a game for me anyway.