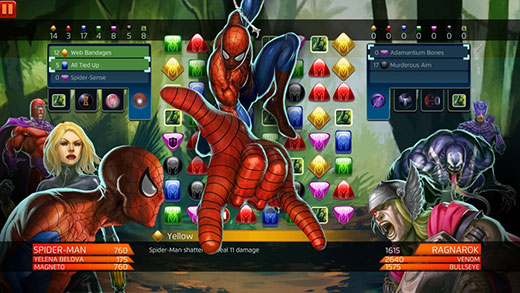 HIGH Taking first place in one of the rotating competitions.

LOW Getting combo'd to oblivion while my whole team was stunned.

After a new-owner's love affair with my iPhone and the app store, I quickly grew tired of the games on offer. There's some brilliant stuff for sure, but so much of it is shallow, samey, and riddled with IAPs. It soured me, and my phone went from gaming device to being just… a phone. Since that cooldown, it's been quite a while since I found an iOS title that kept my attention for more than five minutes, but I tried Marvel Puzzle Quest on the recommendation of a friend (Hi Rowan!) and I haven't stopped playing since. Although its core is a match-three puzzler like so many others, it's the surrounding content and balance that make it notable.

Marvel Puzzle Quest is a free-to-play title that takes some iconic comic characters like Spider-Man, Captain America and Iron Man (along with some not so familiar – what's the deal with Bag Man?) and asks the player to create teams of three. This team then faces off against an enemy group of similar size and the fight is on. However, the action happens not by mashing buttons, but by matching colored gems.

I'm sure some people will be immediately turned off by this well-worn structure, but the comic book characters aren't just window dressing —  the powers these heroes and villains have in the comics are interpreted into mechanics that play out on the puzzle field, and the results are a fantastic fit.

For example, when Venom matches enough purple gems, he's able to do a ‘symbiote snare' which stuns an enemy for a round. When enough of his webs are on the field, he can devour a character whole for an instant kill. Iron Man unleashes a devastating Repulsor Blast with  enough red gems, Captain America's shield ‘returns' after an attack to recharge his gem stockpile, and so on. There are all sorts of powers with various effects, each one tailored to the character who wields them.

Since the game is comic-themed, it makes sense that there's a story mode. It's nothing to crow about, but I appreciated that it's there and I did get a few chuckles out of the dialogue. However, the game is no pushover, and the campaign won't be won in a day. Players will have to earn points by winning battles, and then apply those to unlock new attacks and level up what they've already got. Of course, in-app purchases exist for people who want to take a cash money shortcut, but I found that Marvel Puzzle Quest was more than fair in doling out rewards.

In fact, although I'm usually intensely allergic to in-app purchases, I found the structure here to be quite agreeable. I had little trouble enriching my team with the prizes from consistent wins, so my characters grew steadily. KO'd characters heal over a reasonable amount of time, or can be instantly healed with health packs that regenerate free of charge. Level-ups or extra healing can be had for a price, but I've never needed any beyond what the game provides. Really, the only thing that will likely require real cash is when the player wants to expand their roster. There are a fair amount of heroes to earn and that currency is hard to come by, so a few bucks helps grow the team. It's not necessary to do so, but I enjoyed it so much and never felt like the gameplay was held hostage by the IAPs, so I didn't object to chipping in.

Marvel Puzzle Quest as I've described it so far is quite good, but what puts it over the top is the rotating list of side-story battles that are fought asynchronously against other players, both directly and indirectly. It's possible to match your team up against others, or there are modes in which players compete to earn the most points. There is a bit more of a pay-to-win flavor here, but it's possible to skip battles when obviously overmatched – a brilliant choice. It's tough to take top honors without bringing hardcore heroes to the fray, but it doesn't feel as though there's a paywall keeping anyone out of the running. Even better, participation is always rewarded, so earning a nice little bonus just for showing up creates much goodwill.

As of today, I've probably spent at least fifty or sixty hours on Marvel Puzzle Quest, and I'm still hungry for more. It's exactly the sort of game I want on my phone — deep enough to keep my attention, but small enough to shut off at a moment's notice. The use of Marvel characters is great, and the core idea of connecting special abilities to matching crystals is just as good now as it was back in the original Puzzle Quest: Challenge of the Warlords. I was a huge fan of that title, and Marvel Puzzle Quest proves itself to be a worthy new-school successor. Rating: 8.5 out of 10

Disclosures: This game was obtained via free download and reviewed on the iPhone 4S. Approximately 30 hours of play were spent split between the singleplayer campaign and the asynchronous multiplayer competitions.

Parents: This game is not rated by the ESRB, but contains nothing to beware of. There's no salty language, no sexual content apart from some clingy female costumes, and the characters never actually touch each other in "battle". It's harmless comic book fare.

Deaf & Hard of Hearing Gamers: All speech is delivered via text, and there are no sound cues necessary for play. It's totally accessible.

Well, my feelings differ. I didn’t play the SP portion of MPQ for very long, and I haven’t played any of the MP, but I didn’t care for it. The core gameplay has the same old Puzzle Quest problems, in that drop luck and initial layout dominate strategy and skill. I wish it at least had directional drops like Scurvy Scallywags. Of course the leveling takes care of some of this, but I felt character and team progression were overloaded with resource demands (iso, covers, cash) in order to stimulate IAP. One can grind instead, obviously. Having four separate rewards… Read more »

Brad, I agree with you that’s possible to play and advance without spending money. The problem I have is that the Steam version of the game has the same restrictions than the mobile version. As a pc gamer I’d like to pay 15 bucks for the game and play hours and hours without having to wait for a heal pack or my heroes to recover. It feels like a Facebook game to me because of the restrictions, comparing it to Candy Crush (it’s a match 3 after all -I recognize MPQ is more complex and I’ve played 13 hours of… Read more »

[quote=Sparky Clarkson]Well, my feelings differ. I didn’t play the SP portion of MPQ for very long, and I haven’t played any of the MP, but I didn’t care for it. The core gameplay has the same old Puzzle Quest problems, in that drop luck and initial layout dominate strategy and skill. I wish it at least had directional drops like Scurvy Scallywags. Of course the leveling takes care of some of this, but I felt character and team progression were overloaded with resource demands (iso, covers, cash) in order to stimulate IAP.[/quote] Saying that drop luck and the initial layout… Read more »

Well, my issue isn’t with the health/stamina system per se – e.g. I don’t mind that FightBack employs a similar approach. I just feel like MPQ handles the battle rewards the way it does only so it can frustrate people into spending money, which is what I find distasteful.

I definitely agree with Rodrigo that it would have been better to retool the game slightly as a paid version on PC. I think that could have been accomplished with just a few adjustments to the resource systems.

Rodrigo: Yeah, I agree… The game works well for what it is on a phone, but the current “IAP” system is a poor fit for Steam. Honestly, I’d be THRILLED to pay for a full version that removed all IAPs and turned it into a regular game. I also agree that the current tournament system needs work. For example, when playing during busy times, it’s common to lose 10x more points than you can possibly earn back. it’s VERY frustrating and feels like a makeshift compromise in response to comments that it was too easy for players to camp out… Read more »