Although I don't play many mobile games, there is one I play fairly religiously… Marvel Puzzle Quest. After launching in 2013, the game met with much success and is still going strong today.

That's not to say that the MPQ of today is the same game players knew back then, though.

In this interview, I discuss changes to the game with Kabir Hemrajani, Product manager for MPQ at Demiurge Studios, the game's developer. 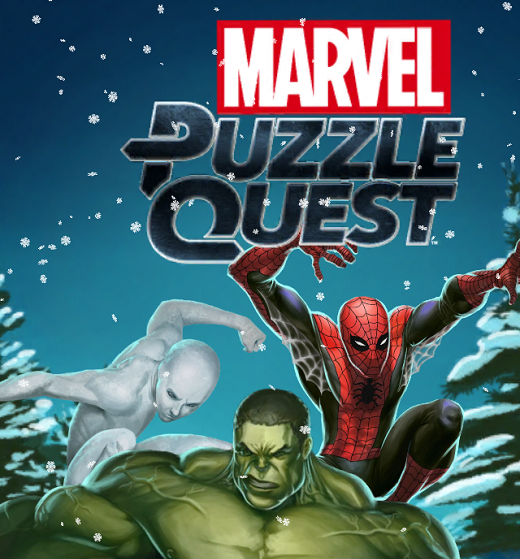 Kabir, thanks so much for talking with me. First off, the game recently celebrated a two-year anniversary. In the mobile world, that's a pretty big deal! How's MPQ doing these days?

Better than ever! We're still seeing a lot of growth in new players, and they often stick around forever. I'm always shocked at the sheer number of people that have been playing for hundreds of days. We haven't seen any signs of slowdown, which is fantastic because the team here loves MPQ, and we're constantly excited about the new stuff we're working on.

Another recent bit of news was the addition of Command Points. These points are hard to get and they can be turned in for 4-star characters with a chance at getting a rare 5-star. How has this addition been received?

Most players are really happy with the addition of Command Points; it's hard to see a downside in adding a new way to get 4 and 5-star characters. The biggest pain point that we need to address is the random way you earn them as mission rewards, something we're certainly hoping to address this year.

Speaking of Command Points, trading 25 of them in for a character token seems a bit high, considering how tough they are to get for non-hardcore players. Similarly, the cost of using CP to improve a 5-star character's powers is a staggering 720 CP. Doesn't that seem excessive?? Are there any plans to adjust these amounts?

One of the biggest challenges we have with MPQ is providing a great experience to players on their first day, all the way through Day 800, which we hit. Couple this with differing levels of play and vastly different amounts of time invested, and you'll get a really broad experience where not everything you see is intended for every player.

For me, 720 CP is a lot, but we have players chasing that goal. Regarding the cost of a Legendary Token, we do have some interesting news: We'll be launching a new 4* or better token for 20 CP in mid-January, as a cheaper option for the folks making their transition to a 4* team.

Moving on to another topic, we've seen an explosion in the number of 4-star characters during 2015, but very few additions in the 1, 2, and 3-star tiers. Are there any more of these characters coming?

As a result, new 3-star characters were overlooked because they just aren't that different from someone you already have covered. One personal example of this for me is Kamala Khan and Grey Suit Black Widow, who both have purple and green powers with similar effects. As a result, as much as I love Kamala, she doesn't get nearly as much love in my roster as my fully leveled Grey Suit Black Widow.

We continue creating new powers that let our 4 and 5-stars do more varied and interesting things, which makes for a more interesting game as you progress, and means there's more to look forward to as you continue playing.

Also in regards to the lower tiers, are there any plans to add events using them? Roster slots are relatively expensive, and most of the low-rank characters go completely ignored except during the Balance of Power event and a few other select times. It would be nice to have a reason to keep them around, or to give new players without high-powered rosters something to compete in. Any plans there?

This is difficult to keep fun and balanced. All players want richer rewards, but being able to obtain richer rewards with lower rarity characters makes it too easy to advance, and this causes boredom. So that's the challenge, and it's one we've thought about but we don't have a solution that makes MPQ way more fun. If it's not fun, what's the point?

A complaint I've heard often from newer players is that making the jump between star tiers is still too difficult, and that the game is too slanted towards longtime players or those who are able to drop a lot of cash into play. Specifically, 1 and 2-star characters are easy to get, 3-star characters are more common now (especially with the Deadpool Daily) but there seems to be a gap when trying to bridge the gap between 3 and 4-star.

From your perspective, what's the transition path players should be shooting for? Are players expected to hit the 1K mark in PVP as the standard way of growing their 4-star stable? That's a fairly serious task, and maybe a bit too much for some players to commit to?

Great question! This is super interesting to us, and something we're going to spend a lot of effort on in 2016. Fundamentally, we have a lot of players that push really hard when they play, so lowering reward tiers removes the challenge and thrill of play for our most engaged players.

That said, we've made a big push to litter MPQ with obtainable Legendary Tokens to help the average player along the 4-star transition. If you play daily, you'll easily be able to pick up a Legendary Token as the Progression reward in Story events. You'll also pull a few out of the Deadpool Daily Vault. I've personally been able to get an additional cover out of the new Versus SHIELD Simulator reward at 2K points for the last few seasons. Command Points will also help, you'll find it's possible to earn at least one a day.

Finally, we're also launching a huge new feature that will definitely shake up MPQ: Champions. After you have fully leveled a 2-star (or better) character, you can add new covers you get to take the character past their level cap. With each additional cover, you'll also earn juicy rewards, like more Iso-8, Hero Points, Command Points and Legendary Tokens. We think this makes every cover you get interesting again, and the Command Points and Legendary Tokens will also help to speed up your progression.

(Edit: A few hours after this interview went live, MPQ made the official Champions announcement. For more specifics go here BUT you read about it here first!) 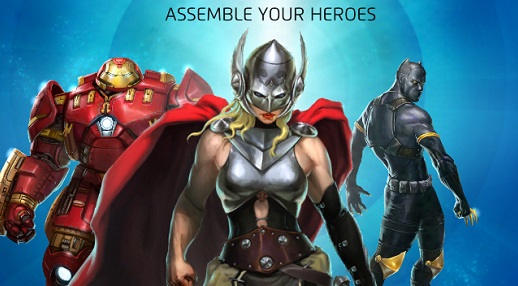 Are there any plans to enable the PC and mobile versions to link? I know of some players who started on PC and can't bring their teams over to their phones, which limits their ability to play.

I don't want to get anyone's hopes up for this. We'd like to offer PC syncing, but the work isn't trivial (There's no Facebook SDK for PC apps!) so it constantly sits in our feature backlog, buried under features that would make life better for everyone, like Champions. We let players transfer their account over if their computer dies though. If you're having trouble on PC, you should contact support from the Help menu in options and we can switch your account over to mobile, but you won't be able to play on both. 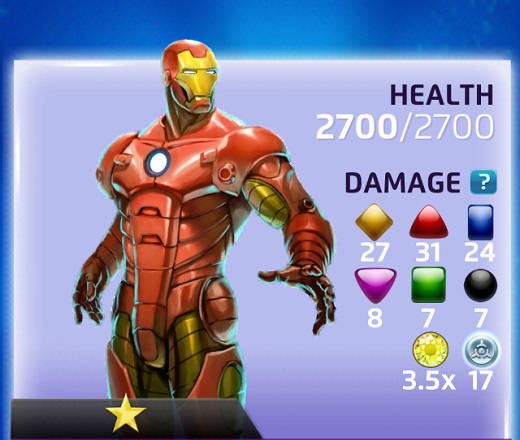 Getting back to the characters, who were the most-used characters in 2015?

The most used character is almost always the 1-star Iron Man Model 35 🙂 Sorry for the lame answer, but we really love to encourage folks to find and use a diverse roster that fits their play style. This keeps MPQ from getting stale for them, and for players that bump into them in Versus events.

Are there any plans to add third powers to characters who currently only have two? Thinking of 1-star Yelena, Hawkeye, Venom, Juggernaut, and Black Widow.

No. One of the reasons players stick around for so long is that your first few hours of play are finely tuned to provide a really great, strategic RPG experience, one that is relatively easy to grasp, tries to teach you the core concepts and lets you progress with each encounter. We do that by keeping things simple, and adding additional abilities for 1-star characters adds more complexity to this experience. 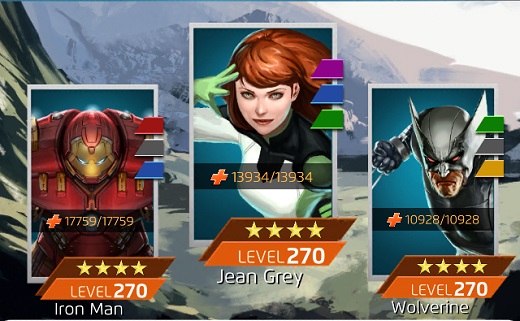 At the moment, it seems like Jean Grey and Hulkbuster are on every high-level PVP team, making for a very tough combo to beat, as well as making play at that level quite boring since nearly all the competition is the same. Are there any plans to adjust their powers, or to ‘nerf' them as a way of leveling the playing field? What about nerfing anyone else? On the other hand, what about buffing characters? Beast and Star Lord still seem a bit on the underfed side…

It's been a while since our last round of character balancing. We have a few changes coming to 3-stars early next year, and I'm happy that they're all buffs. We definitely try to encourage more varied play at every tier, and we love seeing players use more characters. A year ago, at the high end, players were running into teams with Wolverine X-Force and Thor Goddess of Thunder, so I think we're succeeding at not letting one team dominate for too long.

Now that Rocket Raccoon, Devil Dinosaur and Ghost Rider have all been added to the cast (yay!) are there any plans for Sabretooth or the X-Force version of X-23? Who are the fans asking for in terms of future additions, and who would the MPQ team like to add if they could pick from anyone in the Marvel Universe?

Sorry, I've got a total copout answer here. We've got some really great characters coming next year, and they touch all corners of the Marvel Universe, both cinematic and print. In general, we love bringing our fans characters that they love, so we run in-game polls that ask which characters you want to see. Those polls aren't just lip service; our Anniversary highlighted the most requested characters this year.

When it comes to the team's picks, the thing we love to highlight is diversity. The Marvel Universe today is extremely diverse, and we're very proud to be the first game to include Jane Foster as Thor, Amadeus Cho as the new, Totally Awesome Hulk, and Kamala Khan as Ms. Marvel. 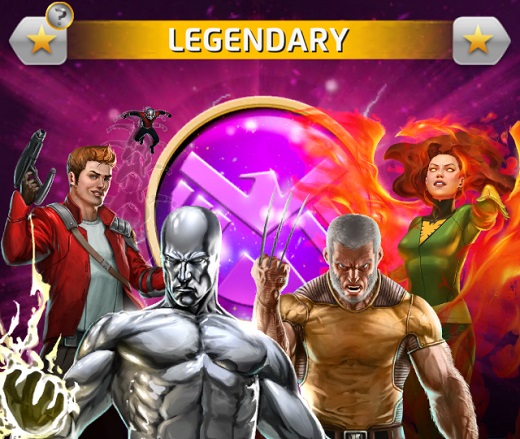 Finally, if there was something you could say to all of the Marvel Puzzle Quest fans out there that you'd want them to know, what would it be?

Thank you!! Thank you, thank you, thank you from all of us here! Everyone on the team considers this an absolute dream job; we love what we do, and everyone that plays Marvel Puzzle Quest, supports it, or tells their friends about it lets us continue to work on a game we're extremely passionate about.

Infinite thanks to Kabir Hemrajani and the entire Marvel Puzzle Quest team! MPQ is currently available on iOS, Android and PC. A slightly different version is also available on PS3, PS4, and Xbox 360.