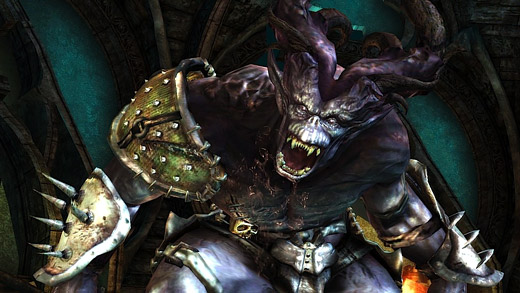 Playing Marvel Ultimate Alliance 2 with the wife right now, doing co-op throughout the entire campaign. (When the baby will let us, anyway…)

I didn't expect much more than a complete rehash of the first game, but I have to admit I'm a little surprised at how lackluster it feels. It's basically there, but needs more polish to really make it pop. We've stumbled across more than a handful of bugs and glitches which always detracts from the experience, and parts of the game just don't feel very well-thought-out. The boss fight with Yellowjacket was a complete mess, and it really drives me up the wall the way the game is so capricious with the team you've selected.

I've been using Captain America and Luke Cage, both of whom are randomly rendered "unavailable" at various times during the campaign, forcing me to change my team. It's not really that big a deal, except that the selection of available characters isn't very good and the computer randomly redistributes my experience points whenever a shuffle happens.

There are a few other annoying things and the hyped "fusion" team-up powers are the epitome of gimmickness, but to be perfectly frank there's nothing game-breaking or terrible going on here—but there's not anything especially exciting, either. I suppose it doesn't help that I wasn't following this particular arc of story in the actual comics, so some of the events that happen in the plot seem pretty ludicrous to me.

On the PS3, I've been putting some time into Trine, a recently-released $20 PSN game which is essentially a 2.5D side-scrolling action title vaguely similar to something like a Castlevania, but only in the loosest sense.

The hook to the game is that a Wizard, a Thief, and a Knight touch a magical artifact which binds them together. Only one of them can be onscreen at a time, but the player is free to switch between each of the three at will. Each has a unique ability or trait that aids in progress for each level, although I will say that so far the Wizard seems like the least-useful of the lot.

It's definitely a quality experience, and seems to offer quite a bit of content for the money. More on this one later.

In Dragon Age news, there's no news. I pre-ordered the game a while ago, and had completely forgotten about it until this week. Unfortunately, I actually moved between the time that the order was placed and when I remembered about it, and the package had already shipped by the time I went online to change my information.

Customer service is telling me that the package should be forwarded through the post office with only a minor delay, and I'm really hoping that they are correct. The other potential outcome is that the package gets sent back and I get my money refunded—which would be fine in any other circumstance, but there's no chance now to re-order another pre-order package.