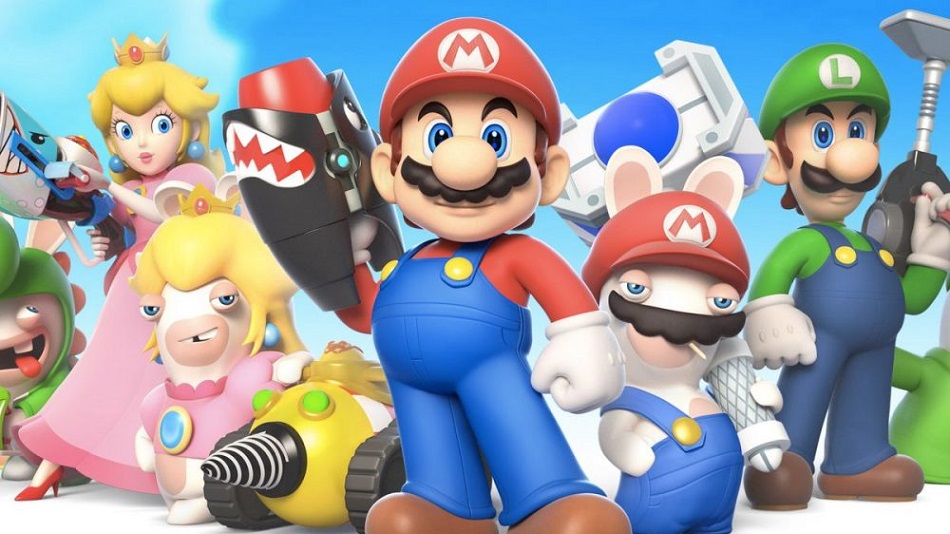 WTF Seriously, who likes rabbids? They are awful.

Let’s be real for a second here — Rabbids suck. They absolutely suck. I don’t like the way they look, I don’t think they’re funny or cute, and I never have. I’m fine with Mario and I enjoy turn-based strategy, but it took me a long time before I could put aside my dislike of these buck-toothed buffoons and try Kingdom Battle. But I’m glad I did! It’s a fresh entry into a genre that tends towards stagnancy, and the sheen of Nintendo characters gave it another layer. But frankly, lose the rabbids and this game would be better without them.

Putting the distasteful rodents aside for a moment, Mario + Rabbids: Kingdom Battle is a turn-based strategy title viewed from a top-down perspective, although cinematic cuts pop in when the player pulls off a nice shot or lands a good hit. The story is a bit of nonsense about a pair of VR goggles with the ability to combine two different things, so of course shenanigans happen and the goggles smash the worlds of Mario and the rabbids together. The rabbidized Mushroom Kingdom is thrown into disarray, so Mario sets out with the help of an AI to get the worlds untangled.

Players start the game with Mario, Luigi, and a rabbid version of Peach with a penchant for taking selfies. More will be unlocked for use as the campaign progresses including Peach, rabbid Luigi, rabbid Mario, Yoshi, and (of course) a rabbid version of Yoshi. It’s a small cast, they’re made available at a glacial pace, and the active team can never be larger than three characters.

At first glance Kingdom Battle seems like any other strategy game along XCOM’s lines, but it isn’t long before unique twists are revealed. Primarily, each character is able to “slide“ into nearby enemies to deal damage, and it doesn’t count as an attack — it’s a free hit, essentially. Characters can also bounce off of each other in order to trampoline across great distances, or in Mario’s case, to deliver a smashing head stomp. Of course, each character has their own special moves. Mario has a hammer for an AoE attack, rabbid Yoshi has a gatling gun, the real Peach has a shotgun and can shield others, rabbid Peach can heal, and so on. 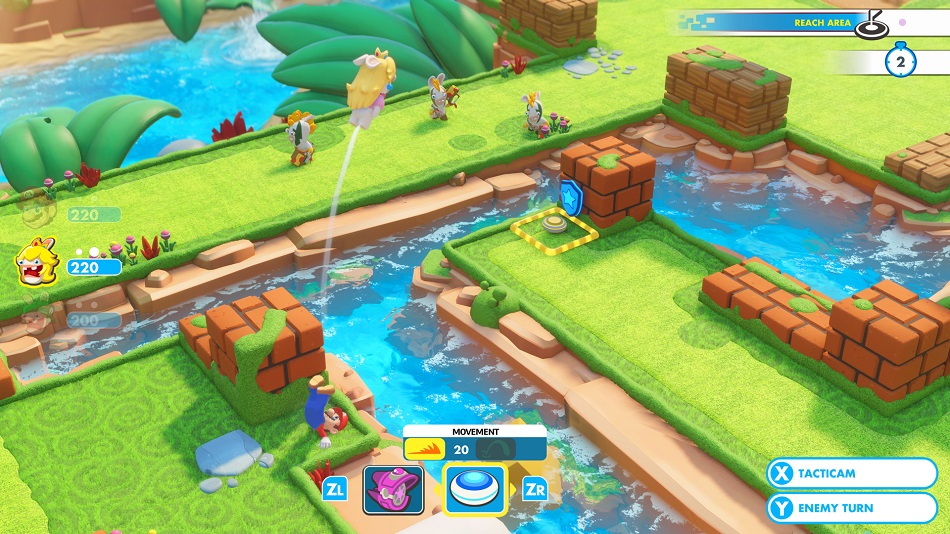 Experimenting with different powers, getting free slides in, and leveraging team jumping for maximum mobility give Kingdom Battle a flavor all its own, and it’s a tasty one thanks to the meta-strategy of finding synergy in these systems — it’s a great feeling to ding three enemies in a row with a slide from one character before having a second leapfrog off the first and land behind enemy lines to unleash hell. When those enemies get bowled over, a third can pick the survivors off and never give the opposition a chance to react. It’s dynamic stuff.

I also enjoyed how Kingdom Battle deals with hit percentages — it’s either 100%, 50%, or 0%, and based on whether an enemy is in the open, behind half cover or full cover. This percentage changes in real time as the player weighs potential moves around the map, so there’s never any confusion about what the outcome of an attack will be. After dental reconstruction from grinding my teeth in XCOM thanks to missing shots with a 97% chance of success, it’s nice to be dealing with reliable info.

From a high-level perspective Kingdom Battle feels fresh and gets a lot right, but it also makes some really strange decisions that hold it back. One of the biggest issues was the strict limitations on team composition. Mario can never be removed from the team, and since a team is always three characters, this leaves only two slots to experiment with. Out of these two slots, one character must be a rabbid. Having such tight rules on team makeup felt ridiculously limiting and unnecessary.

Another off choice is that experience points are given to each character on the roster whether they participate in battle or not, but weapons have to be bought with money earned in battle. While cash isn’t extremely tight, I was cautious about spending because I never knew when I would need to upgrade, and didn’t want to waste money on characters I might not use. As such,  I ended up playing the entire campaign (with the exception of one boss battle) with my starting team. There was little reason to switch, and when I did want to experiment, there wasn’t enough freedom to do so. 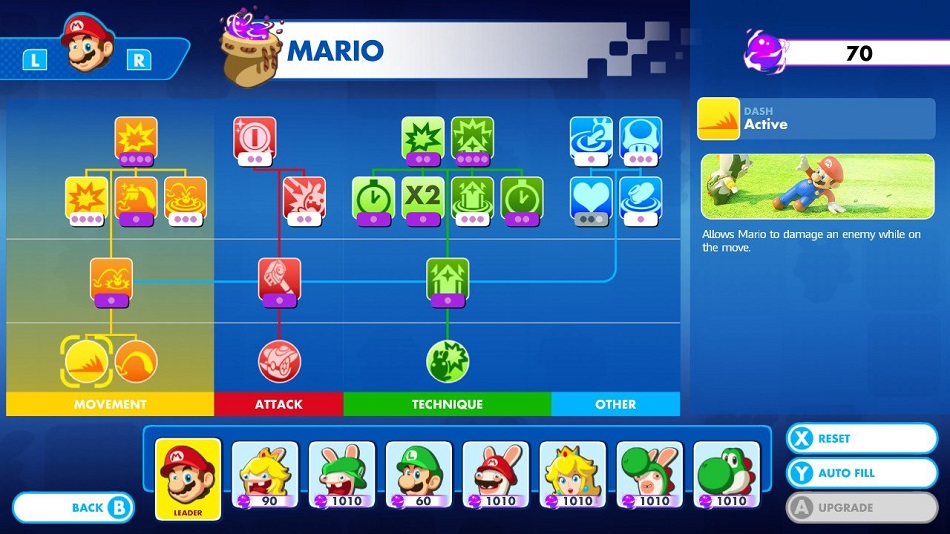 The world design also leaves something to be desired. At no point does it employ the traditional platforming or 3D action that Mario is known for. Instead, the team roams a series of rooms and pathways between battles. It’s fine, but every once in a while there’s a confusing patch where it’s hard to tell which way I came from and which way I needed to go. The worlds are also peppered with basic puzzles that are more busywork than anything — not only were they speed bumps between battles, the rewards for solving them were usually pieces of artwork, 3D models, or music tracks. None of it felt worthwhile.

Also, the campaign is just too long. The devs seemed to run out of ideas about two-thirds of the way through, and from that point it was repetition — the same enemy types reappear with different skins, and the challenges just get cheaper and more annoying. I enjoyed my time with it, but there was still a sizable chunk left once I was ready for credits to roll.

Finally, the rabbids. I already I ranted about them at the beginning of this review, but dear lord, I can’t stand them. I would have paid $20 for a DLC that removed from the game, and while I genuinely wish for a sequel, I hope it’s without the little monsters — I’d much rather see a Mario-only cast, or even a Smash Bros. mashup of Nintendo franchises. These long-eared Ubisoft freaks can’t hold a candle to even the worst faces Nintendo can offer, and I had more than my fill of them this time around.

Overall, Mario + Rabbids: Kingdom Battle brings a welcome shot of vitality to the turn-based strategy genre thanks to interesting team mechanics and a colorful Nintendo theme that sets it apart from its contemporaries. Taking one of the biggest IPs in the world and marrying it to an all new type of gameplay was a huge risk that paid off wonderfully, and I’m glad that it finally found its way to my Switch. Now, bring me a sequel with a couple of needed improvements and 100% fewer rabbids, and we’re in business… Rating: 7.5 out of 10

Disclosures: This game is developed by Ubisoft Milan and published by Ubisoft. It is currently available on Switch. This copy of the game was obtained via rental and reviewed on the Switch. Approximately 22 hours of play were devoted to the single-player mode, and the game was completed. There is a multiplayer mode with special team challenges separate from the main campaign. No time was spent in this mode.

Parents: According to the ESRB, this game is rated E10+ and contains Cartoon Violence, Comic Mischief and Mild Language. The official description is as follows: This is a strategy/role-playing game in which characters from the Mario and Rabbids universes attempt to save the mushroom kingdom from an invasion. From a top-down perspective, players explore whimsical environments and engage in turn-based battles against rabbid enemies. Characters use “cartoony” blasters and grenade-like explosives to defeat enemies that disappear into pixels (when hit points are depleted). Some cutscenes and attack animations depict slow-motion and/or close-up damage effects. During the course of the game, Rabbids make occasional flatulence noises; characters are also depicted bathing in toilets, scratching their buttocks, and/or sitting on toilets/pipes. The word “hell” appears in the game.

Deaf & Hard of Hearing Gamers: All dialogue is subtitled and there are no audio cues needed for play. I completed the campaign with no sound at all — it was on mute the entire time — and had no issues. It is fully accessible, and the text cannot be resized. 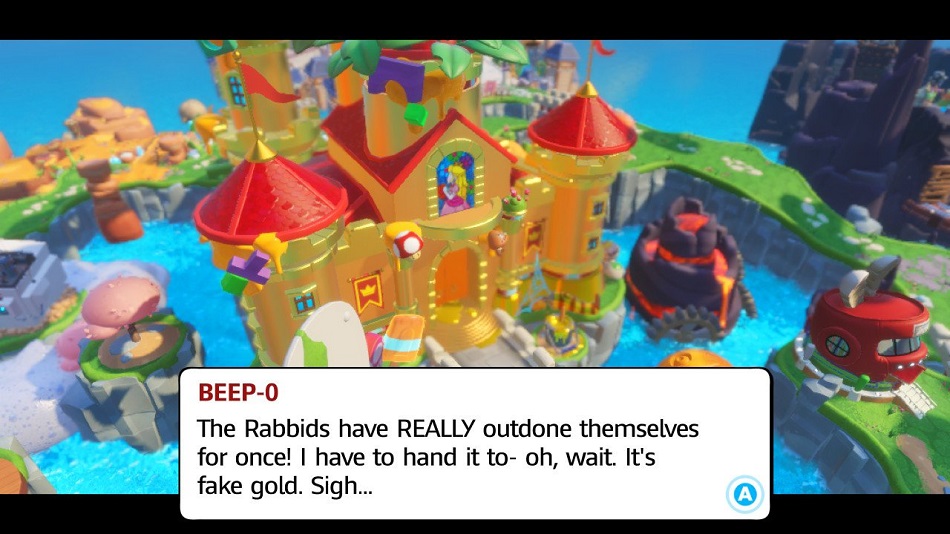 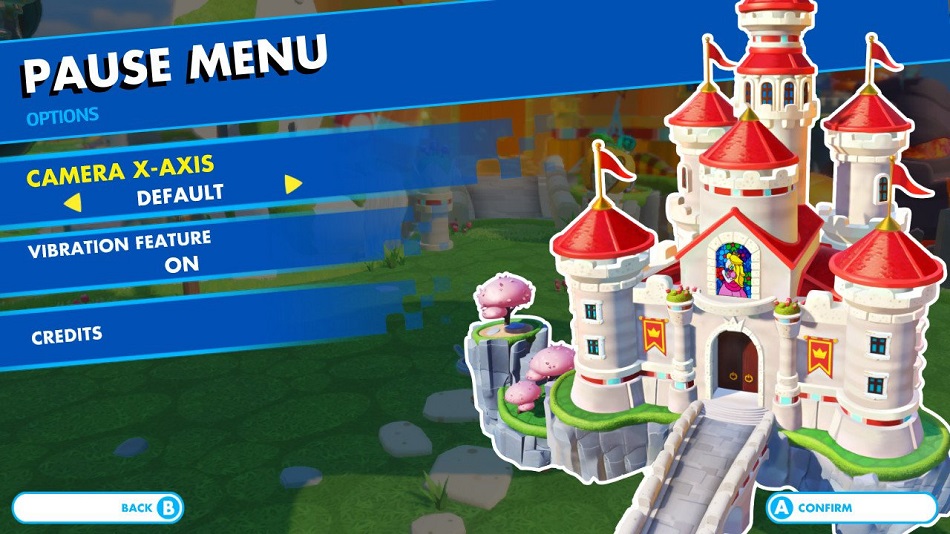