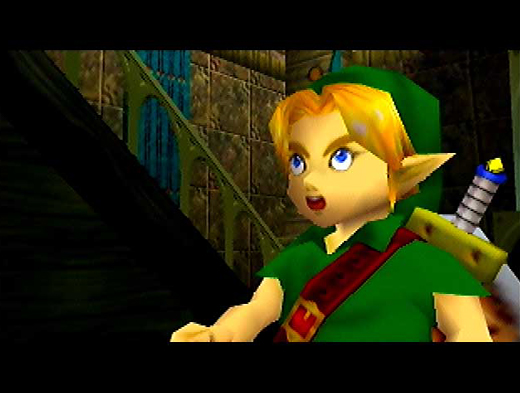 The other day on Twitter, somehow or another the subject of The Legend of Zelda: Majora's Mask came up between a couple of smart people. (No, I was not one of them.) It was an interesting discussion, but one that I couldn't really participate in because I've never finished the game, nor spent much time with it. Critically speaking, it's one of "those games" that is often cited as an example of X, Y or Z, and because it's so different from the other games in the Zelda series, there is apparently much to dissect in it.

I did play the game back in the day when it was new, but it's been so long (released in 2000) that I couldn't remember much about it except that I had an intense dislike for it. The details of my experience were basically lost in the mists of time, so I thought it might be a good idea to revisit the game and see if my opinion of it had changed. If nothing else, I wanted to at least finish it so that I could speak intelligently on the subject next time it came up. Shortly afterward, I went online and downloaded Majora's Mask to my Wii and fired it up.

About an hour later, I turned it off. I now remember why I dislike it. In a nutshell, Majora's Mask is everything I can't stand in video games condensed down into one tidy package.

The game starts out in a town filled with people to talk to, and I generally loathe talking to villagers. After talking to people, it's clear that everybody in town has one quest or another they need your help with, and I'm not generally a huge fan of sidequests. I'm also pretty tired of Zelda, so the overly-familiar cast of characters and music does not appeal to me. I don't like blindly searching for things, and the first two quests I got were telling me to go blindly search for things. My little fairy sidekick kept reminding me that we were on the clock, and I hate timed missions. Toss in other little odds and ends like the incredibly dated graphics (wow, crude 3D really doesn't age well, does it?) and the wonky controls from way back in the day when people could not manually move the camera, and I just don't see a way that I can get through the game without losing my mind.

In a perfect world, I would like to sit down and critically explore what it is that makes Majora's Mask such a perennial topic of discussion, but I've got to be honest here… I can put up with a lot of stuff and my tolerance for getting through certain things is probably better than most, but when a game comes along that pushes every single button I have at the same time, I've got to call it quits.

Just can't do it. Sorry. 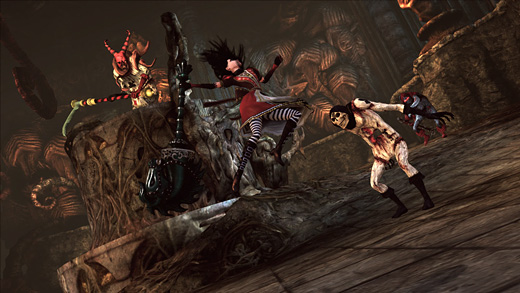 Speaking of titles from the past, I just finished American McGee's Alice, also from 2000. I didn't have a gaming PC at that time and I've never been a big fan of PC gaming anyway, so it has always been one of those titles that I wanted to get around to, but never really did. When I heard that it was a DLC pack-in with new copies of Madness Returns, it was pretty exciting news.

I just completed the review and will be submitting it for publication later tonight. It was an interesting experience, to be sure… for much of the time, playing was monstrously painful thanks to the crude level of technical production. Slippery slopes, jumps that require too much precision, and absolutely execrable combat were all sour elements that I could have done without. On the other hand, I think the general concept and game flow were better than what we got in the sequel. Alice doesn't have the same fetish for platform jumping that Madness Returns does, and it's about 60% shorter—both great things in my book.

I'm glad that I played it and it was especially nice to be able to compare it to the sequel, but I can't honestly say that it was a positive experience overall, and I don't think that I would really recommend it for anything other than research purposes.

With both of those moldy oldies off my plate, it was time to hit the backlog that I talked about in the last update… with a good number of votes and knowledge that a sequel is coming this year, I went with Darksiders and put about two hours into that so far.

I have to say, I just about fell out of my chair when I started it.

I saw the game in an alpha-ish date at PAX '08 or maybe '09, and at the time, it looked like garbage. Don't get me wrong, I knew that it was nowhere near done, but it was damned hard to imagine that what I was seeing on the screen coming together into anything I'd be interested in.

What a difference some time and polish make!

The leap in quality between when I first saw it and what I was seeing on my TV screen at home was like night and day—it was almost unrecognizably different, and in a good way! The animation was much smoother, the detail in the environments was a thousand times better, and just everything about it screams "high-quality".

Like I said, I've barely started, but so far it's scratching my itch. I'm looking forward to putting some more time into it, and I'm still trying to get over the shock of how much better everything about it is. Part of that shock is definitely on me since I should have been more willing to give the game a chance, but at the same time, I guess that's one reason why most developers don't like to show their games when they're so early in the production process…