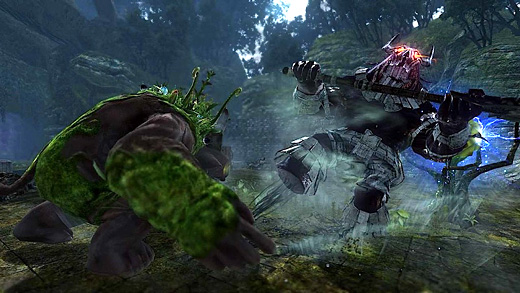 I scored a copy of Majin and the Forsaken Kingdom for cheap during Black Friday, and I've been putting time into it since then, albeit haphazardly.

While it's true that my work schedule has been kind of erratic and disruptive to my game schedule (which clearly, is far more important) the truth of the matter in this case is that I'm having a hard time finding the motivation to push forward. The game is cute and I'm always interested in how developers implement team/partner mechanics in singleplayer titles, but Majin just isn't doing much for me.

The biggest thing I've noticed so far is that the tone of the game has been pretty flat. I'm about halfway through the adventure after logging about five hours, but it feels more like fifty.

Most of the game is made up of getting through a series of rooms where each one has a puzzle of some sort to figure out. Suss out what you're supposed to do, open a door and move on. There haven't been any dramatic events to break up the monotony of this work (unless you want to count the two bosses I've seen up to this point) and the infrequent cutscenes are pretty banal. There's just no spark here… No fire.

Honestly, it's so lukewarm and toothless that it seems as though Majin is aimed more at kids than that adults—and in that context it makes a little more sense, except that I would imagine some of the puzzles to be a little too vague and the bosses a little too frustrating for most kids to get through without some skilled parental guidance.

I'm going to keep forging ahead, although I guess I don't really know why… hopefully the game will end before my patience does. Although I was quite glad to see Majin developer Game Republic back in action, I have to admit that the fun factor has been dreadfully low so far. 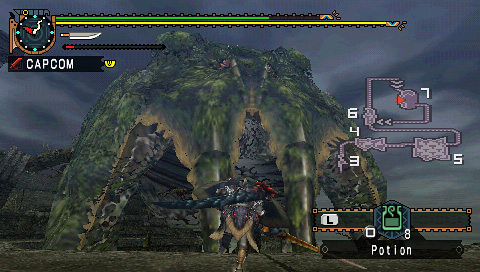 In the portable realm, I'm still logging some time with Monster Hunter Freedom Unite on PlayStation Portable (PSP). At this point I think I've spent something like 70 hours on it, but in stark contrast to Majin, it feels as though I've only been playing for a small fraction of that time.

I got hung up on a particularly nasty boss for a while (that Tigrex is no joke) but finally found a workable strategy and I've been knocking out missions pretty regularly since then. I don't want to speak too soon, but it's starting to feel like the end of the game is within sight.

The deeper I get into it, the more impressed I become with the breadth and depth of the content. It's really a fantastic, rich experience for the sort of gamer who doesn't mind the basic structure being split 50/50 between Really Hard Bosses and Grinding For Items. In fact, I'm enjoying it so much that it seems like a real injustice that the game makes its home on the PSP where the camera is so problematic that I can completely understand why many people would write it off as being unplayable.

I read a news blurb earlier today stating that the newest Monster Hunter on PSP (Portable 3rd) has already sold over two million copies in Japan. That's some pretty impressive sales, and I sincerely hope that Capcom is planning on bringing it stateside.

That said, people in America just don't get together for multiplayer portable parties the same way that they do in Japan. More significantly, this game demands better camera controls. Monster Hunter Tri on the Wii proved that the game is infinitely more playable with a decent controller, and as much as I enjoy the series, I can't say that I'm looking forward to more hand cramping with the PSP.

Of course, the optimal answer is that Capcom should do something with the Monster Hunter Frontier branch of the series and put the game on Xbox Live. Better controller, immediate online and group capabilities, and a much more powerful piece of hardware to run it on. Sadly, the last time I checked, Capcom said there were absolutely no plans to bring Frontier to the West, so there's that… as much as it pains me to say, it seems as though Monster Hunter is squarely on the path of "successful in Japan and nowhere else."

I think we’re coming to a similar conclusion about Majin, Brad. The game doesn’t seem to have a real conceptual identity. The Majin himself feels like he dropped out of a kid’s game, but the main character looks like he was designed to appeal to an older demographic. The way the stealth kills play out (with that violent stab through the abdomen) also feels like it’s better suited to teens than kids. We’ve already discussed the voice acting over twitter, and the issue you’re identifying with the difficulty is also something I had in mind. This is the rare game… Read more »

I kinda feel sorry for Majin and the Forsaken Kingdom even though I fully accept that it is a 6 or 7/10 game at best. The concept and idea of the game is exactly what we need to keep gaming interesting, and to allow it to flourish over many genres and offer enjoyment for many different people. If anything, the developers stood to gain from the popularity (I’m quite comfortable to say that now) of ICO since Majin seems to offer a similar, albeit less fragile experience (since instead of a weak girl, you get a big hulking monster to… Read more »