Still working my way slowly through MadWorld. Not that it's really difficult or long, it's just that I get bored of it and have to move onto something else after two or three stages. Thankfully, it looks to me as though I'm getting close to the home stretch. 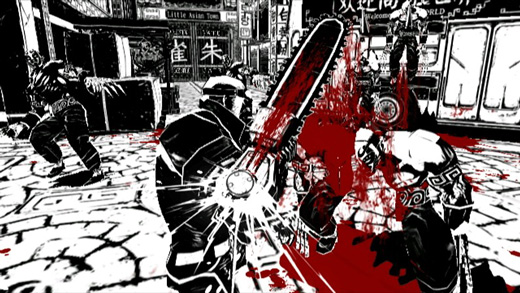 I have to say, I'm a little confused as to where all the over-the-top praise is coming from. Every review starts off by saying "I'm not giving this game a high score just because it's on the Wii" and yet, I can't help but feel that's a big factor. The game's formula is quite simplistic, the action gets repetitive, and to be perfectly frank, I don't think that the black-and-white color scheme really serves the game well. It's definitely distinct, but it can be hard to navigate the levels at times. When you're surrounded by a group of enemies, it's next to impossible to tell where you saw that last life-up dropped.

I mean, don't get me wrong—it's not terrible… it's just really shallow and limited. Certainly a case of style over substance. Even though the enemies look different in each area, it feels as though I'm killing them the same ways, not to mention that killing enemies over and over to earn enough points to open up the boss doesn't strike me nearly as entertaining as the developers must think it is. Factor in the usual camera complaints and the annoyance of motion controls, and MadWorld is certainly one of those times when I'm pushing through just for the sake of saying that I finished it. Entertainment or intriguing design are not part of the equation here.

Just watched the latest trailer for Radical Entertainment's Prototype this morning. I must say, my jaw dropped just a little when watching it…

In a case of incredibly ironic timing, Prototype is making the rounds in the games media at the same time that Sucker Punch's inFamous is. Both games use the same basic formula of an open-world bad-ass amnesiac superhero (villain?), both sport Parkour-ish influence, both feature wicked-looking combos and attacks. The only currently discernible difference between them is the implementation of powers: Prototype leans towards bio-creepy-tenaclish, whereas inFamous seems to be going with electricity.

I'm a big fan of the open-world style of game design when it's done well, and I'm keeping an eye on both of these titles, but I'm a little doubtful that I'd want to play both of them back to back. In addition, it's inevitable that they are going to be compared to each other, and one will certainly trump.

On the one hand, I must admit that the bio approach strikes me as a little more interesting than electricity, and Radical's Hulk: Ultimate Destruction was certainly headed in the right direction, if not exactly what I had hoped it would be. An improved and more balanced take on that formula would be very welcome. On the other hand, Sucker Punch has never made a bad game. Their track record is flawless, and if there was ever a sure thing in game development, it would be them.

This is going to be a close race, folks.