Riding with the Angel of Combustion 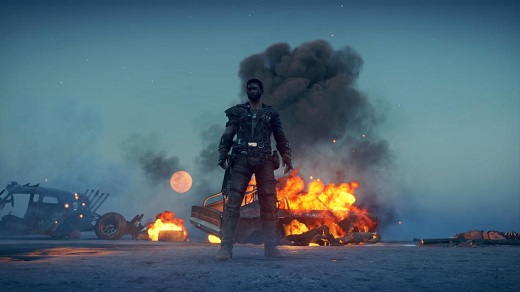 HIGH The sandstorms are absolutely jaw-dropping.

WTF Who thought releasing this on the same day as MGS V was a good idea?

Video games are often colorful, loud, busy, and full of things meant to grab a person's attention, but one thing most video games aren't is subtle. And if one is, God help it in a marketplace already brimming with competition and getting thicker all the time. How can a subtle game expect to stand out with a whisper when everything else is shouting at the top of its lungs? As someone who's played a hell of a lot of games over the years, I've come to appreciate subtlety, and it's pleasantly ironic to find it in a title full of roaring engines and bloody survival.

To properly frame it, Mad Max isn't a tie-in or continuation to any of the films. As disappointing as it may be, at no time does Imperator Furiosa make an appearance. Instead, Avalanche Studios chooses the wisest path when dealing with a license—they take the ideas, themes and spirit of this iconic IP and create a completely new iteration that is both immediately familiar, yet notably different.

As the game begins, Max is battling a twisted warlord and ends up losing his car. He's left for dead in the sand, but picks himself up and soon meets an eccentric mechanic named Chumbucket. Chum worships vehicles, sees Max's potential as a driver, and volunteers himself as a sidekick and guide. Together, the pair start to build a new car called the Magnum Opus, but they lack the parts needed to make it durable enough to survive the wasteland.

While the plot is fine enough for the game's purposes, it's a secondary concern until dramatic events build up to a head in the final hours. No, the biggest, most compelling thing about the game isn't the plot, but how amazing the world is.

After gaining new wheels and setting out into the huge explorable area, I was fascinated by the geography—it's the sort of sun-scorched deadzone one would rightfully expect in the films, but this particular waste is set at the bottom of an evaporated sea. Wrecked ships litter the land, and their rusted-out hulks frequently form the core of camps or fortresses for hostile groups.

It's absolutely fair to call this place a desert, but leaving it at that does a gross injustice to the work done to make each part distinct and varied. In the northeast, it's a vast ocean of rolling yellow dunes. Moving west, it's a disgusting series of trash heaps and flame. The south is hardpacked, dry and dusty, and natural rock formations break up the horizon. Salt crystals form in one place and crude oil bubbles up in another. The land chewed up under Max's wheels is a true accomplishment, and a perfect example of how subtle design can create compelling effects.

Mad Max's architecture is just as impressive as the desert. While most buildings are decrepit structures cobbled together from remnants of the former world, I never came across two that were exactly the same. One enemy camp was built on the skeleton of a half-fallen bridge, while another incorporated a crashed jetliner. Some enemies prefer ruling their areas from mountain caves, and some burrow in structures buried by windswept sand trying hard to erase the past. While the buildings might seem like identical scrapheaps at first glance, there's a great deal of variation and creativity to be seen, if one takes the time to observe it.

When it comes to how it plays, Mad Max is divided into two major sections: on-foot, and behind the wheel. These parts are not so subtle.

Outside the car, the developers offer a simplified version of the counter-heavy combat made popular by the Arkham titles. It's not as blinky-fast or gadget-heavy as Batman is—Max only carries a shotgun and knives—but it finds a good rhythm and the animation is excellent. Moves can be unlocked as Max advances, and by the end he'll be disarming attackers, escaping from grabs with a shiv to a captor's throat, and using an extended rage mode to deliver bone-cracking punishment.

While the combat was more than satisfactory, the bosses were a letdown. Mad Max only sports two types; heavy and light. The light bosses require Max to be quick with his counters, and the heavies mean a lot of dodging and using weapons dropped by underlings. A few more substantial variations would have been welcome, and even worse, they look like clones of each other. It was a surprising and disappointing place for the team to cut corners.

On the other hand, I'm happy to report that Mad Max's treatment of the driving is far more satisfying than that of the bosses. Avalanche absolutely nails the fatalistic energy that's such a large part of the movies, and it's impossible not to smile while screaming down wasteland roads and smashing into enemy cars. At certain points the player will encounter enemy convoys, and these multi-car assault missions are a thrill. Hitting the nitrous, ramming an unarmored enemy into a fireball of shrapnel and then blowing the lead car's tires out with a shotgun is pure adrenaline.

While I enjoyed nearly everything about the Mad Max experience, what put it over the top was Chumbucket. He rides in the back of the Opus and elegantly kills several birds with one stone. Functionally, he slings harpoons and fixes the car when it wrecks. In terms of lore, he's well-versed in the land and gives color commentary, eschewing the usual audio logs and volumes of text. Thank God. In addition to being useful and full of vital information, he's also a vital counterbalance to Max's grim stoicism and adds just enough humor to keep the game from becoming joyless. That's not to say Mad Max ever becomes a lighthearted romp, but all-dark, all-the-time is wearying. Having Chum along for the ride is brilliant.

While Mad Max doesn't reinvent the open-world genre, I loved reveling in the things it gets right. Burning through the wasteland in a guzzolene-fueled killing machine and smashing desert raiders at high speed is a perfect screen-to-screen translation of this seminal cinematic series, but the deeper richness of the world itself is a masterclass in subtle presentation, and it goes a long, long way towards selling the experience overall. Top class. Rating: 8.5 out of 10


Disclosures: This game was obtained via publisher and reviewed on the PS4. Approximately 38 hours of play were devoted to the single-player mode, and the game was completed. There are no multiplayer modes.

Parents: According to the ESRB, this game contains: blood and gore, intense violence, strong language, and use of drugs. Parents, keep the kids away. The hand-to-hand violence is quite explicit and the majority of characters in the game are horrible people to various degrees. One character huffs gas, and everybody swears. It's perfectly in line with the films, so… Not for kids.

Deaf & Hard of Hearing: Although the game does feature subtitles for cut-scenes and Chumbucket's incidental dialogue while driving around, I did notice a few instances where the subs dropped out. It seemed more like a technical hiccup than an omission, though. Outside of a few occurrences, it was all good. No audio cues are necessary during gameplay, all important elements are on the minimap or on-screen. I'd say it's fully accessible.