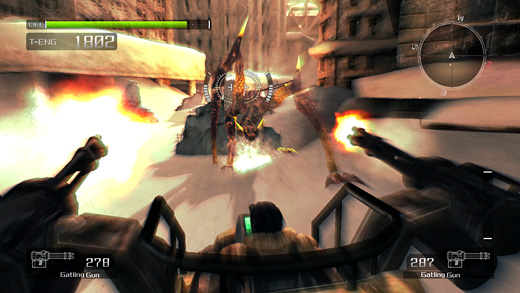 On paper, the two games are practically identical. Both feature third-person frenetic run-and-gun action against huge swarms of giant creatures, mostly buglike. Both feature a large assortment of weapons in addition to vehicles or robots that can be piloted, and both make their home on Microsoft's Xbox 360 using the exact same hardware and technology.

The difference? Lost Planet is a sterling example of rock-solid control and level design, and one of the finest pieces of showcase-level production values created to date. Every element that EDF bungled, Lost Planet hits out of the park effortlessly. Instead of throwing mindless numbers of clipped-through drones at the player in an effort to drown them like EDF, Lost Planet's levels are carefully structured for sweat-inducing combat while never feeling senselessly haphazard. Where EDF feebly tried to create spectacle, Lost Planet crafts scenes of truly stunning imagery which can easily stand up to anything else on shelves today.

But to simply compare Lost Planet: Extreme Condition to a simpering, weak-hearted thing like Earth Defense Force 2017 would be doing Capcom a disservice. Although the core game structure isn't a revelation, the disc is a perfect example of how crafting each aspect perfectly can create a whole which is greater than the sum of each individual element.

Before playing the game, I doubted whether Dan's enthusiasm and bombast in the main review were truly justified. Lost Planet fell victim to a wave of backlash after it was released, and the common consensus was that it was less than expected. After playing the game, I think Dan nailed the game's excellent energy perfectly, and I have no idea how any self-respecting gamer could look down their nose at something so impressive.

Although most people currently hold up Epic's Gears of War as the current gold standard in graphics, I thought that Lost Planet's snow-encrusted clothing and sweeping, arctic wastelands were more beautiful and compelling than any war-torn ghetto Marcus Fenix trudged though. The sunset view from atop an enemy installation is art, watching the game's hero Wayne strap into a mechanically detailed VS suit is entrancing, and one heart-stopping encounter with a giant Akrid worm should go down as a classic moment in videogame history. And the explosions… oh, those sweet, sweet explosions. Capcom should be proud because these huge plumes of fire and world-filling clouds of billowing smoke are the best I've ever seen, no contest.

Every aspect that Dan praised, I second. Really, the only area where we differ is that I thought Lost Planet's story was good enough to propel me from area to area, and I thought the characters were a good fit for the material. A sequel should eliminate the lengthy "falling down and getting back up" animation that's a handicap in heated firefights (and I wouldn't mind a longer range for the grappling hook) but I really have no significant criticisms at all. It's that good.

Although its basic genetic makeup can be traced back to more primitive efforts, Lost Planet: Extreme Condition is a true next-generation title in terms of production and presentation. It controls like a dream, it's stunningly beautiful, and it delivers huge amounts of action and excitement, nearly non-stop. It may not be the deepest or most complex game, but it knows what it wants to do and it does it perfectly.

Earth Defense Force 2017—eat your awkward, ungainly, underproduced heart out. Rating: 8.5 out of 10.

I disagree with aspects of your appraisal of Lost Planet. From Capcom I was expecting so much more than what is just a very shallow shooter. The sterile mid-western characters and cutscenes are abysmal. The characters are the worst developed, most poorly scripted and utterly uninvolving that I have ever witnessed in gaming. Through a mix of unintelligent and insulting sub bruckheimer attempts at Americanized dialogue and a complete disregard for any storyline or plot it was completely ruined. It is a beautiful game to look at, but boring, uninvolving, disjointed and flawed to play. From one frustrating, shallow and… Read more »

God, I love this man’s writing. I dare someone to point me to a game writer whose passion comes anywhere near Gallaway’s. Positive, negative, or meh, Brad’s concise reviews deliver every time. No one has ever made me more thrilled about picking up a game, and no one else seems to understand how to hash out the facts, while letting JUST the right amount of personal bias fall into the pot. Brad, yer aces! BTW, I really didn’t want to believe you on the EDF front; I really didn’t! But, after giving it the old college try, I gotta say… Read more »