A Family Man, a Long Way from Home 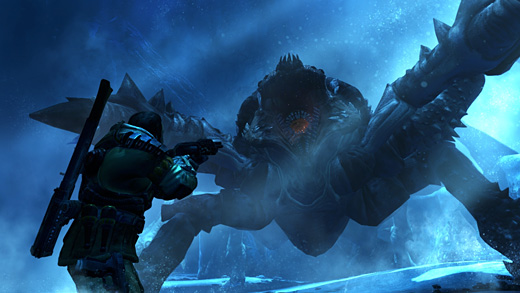 HIGH Realizing the game wasn't going to warp my mech up a mountain.

LOW The unclear, frustrating first use of the claw winch.

Lost Planet is a fascinating franchise, and perhaps an aptly-named one.

Although the three games under its umbrella share common elements, each feels radically different from the others. The first offered single-player adventure, and the second veered off into multiplayer-based action. Those two were a world apart, and now Lost Planet takes yet another detour. As such, it might be suggested that the series has "lost" its way, or that the publisher has "lost" the direction in which to guide it. On the other hand, the best discoveries sometimes come from an unexpected direction—in this case, the third installment is actually a magnificent, in-depth character piece.

Although it's numbered as a sequel, Lost Planet 3

is a prequel set before both of the other entries. The game stars Jim Peyton, a heavy machine operator who's under contract to the world's most powerful megacorporation. Earth is in need of resources, so he's sent to a distant frozen planet to help mine for thermal energy. He's also a handyman of sorts, and does whatever needs to be done—things like fixing damaged pumps, reconnecting remote communications relays and installing machinery to help manage the energy that's found.

Just think about that for a minute. This game puts players in the shoes of a man who is not a military hero, nor a super-powered mutant. He's not a lone survivor to and he's not out for revenge. He's not even angry. Jim Peyton is a hard-working guy who has taken the only employment he could find to support his wife and child half the galaxy away. Lost Planet 3 is a game about a man who's literally just doing his job, and it's absolutely fascinating.

What I like most about the game is that the developers have made such an earnest effort in illustrating Peyton and the world that surrounds him. Much attention was paid to worldbuilding and atmosphere, down to details like the random chatter overheard in a service bay, or how stepping outside the walls of the player's base doesn't result in immediate gunplay. There are rationales for why there aren't cannons mounted on every vehicle, and why the enviro-suits don't use helmets. Text and audio logs make sense in the context where they're found, but they're used with a restraint that doesn't destroy immersion. 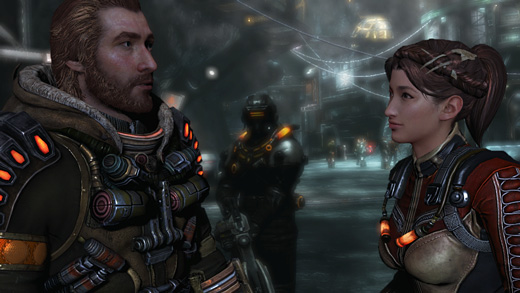 Along the same lines, Jim himself feels entirely human. Nearly every dialogue sequence feels natural and appropriate, and Jim's interactions come off like everyday workplace chatter—there's no talk of saving the world or grand pronouncements of warfare, these are people punching a clock which just happens to be in a sci-fi setting. On a more personal level, when Jim receives one-way communications from his wife back on Earth, it's easy to imagine how lonely it must feel to be so far from home. At one point he even watches one of her messages all the way through, and then immediately starts to watch it again. That was a real, relatable thing, and one which most games would miss entirely.

This attempt at creating a level of believability for Jim also extends to the way the game actually plays. While some might be put off by the immediate lack of high-octane action, I was instantly engaged by the deliberate, low-key pacing and the way the large mechs fit into the world.

Rather than being awesome engines of anime-style destruction, the "rigs" in Lost Planet 3 are bipedal multipurpose forklifts that get heavy jobs done. At any time, Jim can pilot his machine around in first-person or exit to go on foot in third-person, and there are some interesting dynamics on display as he goes back and forth between the two modes.

For instance, when the rig is too large or cumbersome to advance through a cave or a steep drift, it gets parked. In another area, the machine just plows through a combat zone and crushes the cover enemies were using just a moment before. In both cases, the mech has a size and a physical presence that communicates the concept of being a "working machine" similar to the way someone would treat a long-haul truck, or a piece of construction equipment.

I was especially fond of one part when Jim needed to figure out a way to haul his rig to the top of mountain—other games would have simply teleported the player up and had the summit stocked with enemies to be dispatched on arrival, but not here. The rig is big and bulky, and Jim's process of getting it loaded on a lift and shipping it up to the peak felt grounded and convincing. This avoidance of typical shortcuts (among many others) and adherence to real-ish design decisions imparts a sense of being in a world that makes sense in a way that few games can compete with. 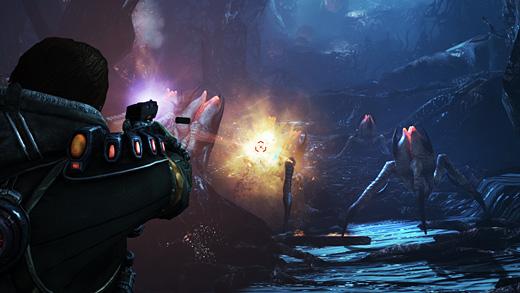 Of course, the things I'm praising here are unconventional to say the least, and I can imagine some people being confused or put off by the kind of content that Lost Planet 3 offers. It's very tough to explain or demo the experience, and will probably appeal most to the kind of player who's open to something that's more than a little off the beaten path. Those coming to the game with expectations of fast shooter action or using big robots to wreck stuff will undoubtedly be disappointed, but in my book, that's OK. There are loads of titles that focus on twitch-killing and destruction, so something with a totally different goal is incredibly welcome.

If one can accept that Lost Planet 3 is not intended to be an adrenaline-soaked shoot'em-up and not count that as a negative, I'm of the opinion that there aren't many areas in the design that need much work. That's not to say it's perfect, though.

While there's relatively little shooting compared to other games, gunning down hostile wildlife is part of the job, and some of the guns feel a bit sluggish and loose. Along the same lines, I found that the bosses Jim encounters have too much health. There's a fine line between a challenging fight and one that drags on past the point of entertainment, and the ones here are just a hair on the wrong side of it.

Otherwise, the only significant thing to mention is that the writing felt a bit rushed near the end. While it's quite strong for the first 3/4ths of the adventure, there were a few sections that needed more time to simmer. There were no gaping omissions or obvious plot holes, but the earlier pacing and clarity seemed to lose some of its sophistication before credits rolled—surprising, given the quality of what came before.

Those flaws are easy to forgive in light of what the game gets right, though. As a reviewer who's constantly in search of games which try new things or buck expectations, Lost Planet 3

was quietly, calmly fantastic. Everything about it has a very mature, measured approach which sets it apart from the pack, and the character work on display is some of the best I've seen in quite some time.

While I'm sure that spending time with Jim Peyton as he welds pipes and defrosts pistons isn't going to be everyone's cup of tea, getting this kind of "lost" led to a rich and enjoyable experience that greatly eclipsed the expected destination. My compliments go out to Spark Unlimited, and I look forward to getting lost this way again. Rating: 8.5 out of 10.


Disclosures: This game was obtained via publisher and reviewed on the PS3. Approximately 14 hours of play were devoted to the single-player mode, and the game was completed. No time was spent in multiplayer modes.

Parents: According to the ESRB, this game contains blood, mild language and violence. Although there's nothing explicit or over-the-top here, the game is aimed at a mature audience. The writing and pacing scream "grown-up" so salty language is fairly common. The violence consists of shooting alien monsters that bleed glowing orange blood, and a short period of shooting human enemies towards the end. It's pretty standard sci-fi stuff.

Deaf & Hard of Hearing: You shouldn't have any problems. Although some of the ambient dialogue is not subtitled, any communication offering vital information or somehow relating to the gameplay is accompanied with text. The game also offers an on-screen display which shows the location of approaching enemies if the on-screen character is within a certain proximity to the mech, and I did not observe any audio cues which were significant to success.

agree 100% w/you, Brad! LP3 was like a breath of fresh air after some of the other triple A offerings this year (playing the rebooted whimpering sociopath murderer Lara Croft, for example). I immediately fell in love with this game when I realized it was actually based in it’s own story that was a Firefly-ish spin on Dances with Wolves. Loved the characters, the little backstory cutscenes, the missions where Jim fixed things… and having rocking bluegrass on the radio while driving a mech on an ice planet was like a space-trucker fantasy come true. Mark from Classic Game Room… Read more »

Hi Brad,
I appreciate your reviews for their different perspective, and this one is no exception. As a gamer who enjoys the story, character development and setting as much as any “action” that takes place in a video game, I pay particular attention to any game you enjoyed in the event I overlooked it due to poor reviews on other sites. I will be acquiring this game shortly. Thanks!

That’s pretty correct. I loved the premise and the unique approach to the game’s design… With so much standard action out there, something different like this was a breath of fresh air. It’s a great example of not every game being right for every person. Sorry it didn’t click with you!

I think this is a situation where the review identifies uniquely with the premise (father working a tough job to support family he loves) and unorthodox gameplay and forgives everything else in the game that may turn-off others. I say this because I owned LP3, played it and all of those things just left me cold.

Hey guys, thanks for the kind words! I really hope you three give it a shot, and Rob, very happy you agree. IMO this game does something completely different, and a lot of folks didn’t know what to do with it… I really hope it finds an audience over time.

Wow, didn’t expect this… will have an eye out for Lost Planet 3 then. Most other reviews were bashing on it as a mediocre shooter. I guess they expected just something different? Like those folks that gave Vanquish bad reviews for being a “Gears of War-rip-off”, which was completely missing the point.

Well, any game with a Mech in it gets a bonus point in my book anyway 😉