Multi is the New Single 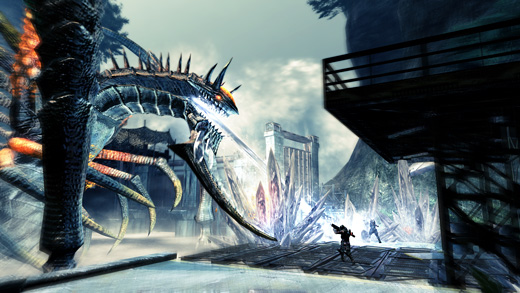 HIGH Jumping into a transforming Vital Suit and unleashing hell on enemy troops.

LOW The poor setup for mission 3-3 turns a great battle into a frustrating slog.

What makes a sequel a sequel? In most cases, the answer is fairly obvious; the protagonist returns, the storyline continues, and gameplay is tweaked to make the next installment feel like "more of the same, but better." This is the route many developers take, and it's certainly sensible—after all, change too much and developers risk alienating their fanbase or squandering the cachet of the brand. However, every now and again a developer will surprise everyone by striking out in a new direction and taking a path no one expected.

Although Lost Planet 2 takes place on the same fictional world as the first and retains key elements like robotic combat machines (Vital Suits) and enormous energy-sucking creatures in a dozen different flavors (the Akrid) this sequel is radically different from the game that inspired it. At its core, Lost Planet 2 has been heavily shifted towards the multiplayer side of the game design spectrum, this change reflected in every aspect.

For example, instead of picking up with Lost Planet's hero where the last game left off, the campaign mode is instead comprised of a series of disconnected missions, each starring a separate faction. Every character wears a mask, and none have names. From this "generic soldier" approach, it's clear that the intent was to put the focus on the action rather than any one recognizable character. While this style would have been potentially disastrous in most titles, it actually makes a kind of sense in Lost Planet 2 since the campaign is designed from the ground up to be played with three friends. (Three bots can be recruited if no buddies are around for co-op—it's definitely not recommended to go lone wolf here.) 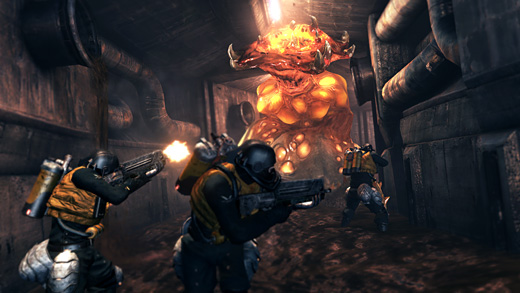 As someone who plays primarily solo, this shift was a little jarring. Disappointing, even. With no central character tying things together and no overarching goal to guide me, each sortie felt abruptly discrete and random. Mission goals were arbitrary, and the motivations behind them sketchy at best. This is definitely not how I like story in my games told, and while I'm not a developer myself, I daresay it wouldn't have been difficult to thread the missions together in a more cohesive fashion, multiplayer or not. However, I did start to grasp what Capcom was going for by the time I hit the halfway mark. As cliché as it sounds, Lost Planet 2 is one of those rare titles that must be played from start to finish before its scope can truly be appreciated.

For example, only after I had been through a number of the missions did I begin to see the appeal in giving different perspectives on the same subject—in this case, each side's role during the planet-wide energy struggle taking place. By the time I was in the endgame, my respect for the multifaceted tale had greatly increased.

The story's slow-burn quality also extends to the gameplay. The first two missions were mediocre at best, but the action began ramping up strongly with the third. The fourth and fifth were impressively epic, and the sixth was a showstopper. Each new mission managed to up the ante and keep things energetically fresh thanks to interesting scenarios and wide variety in level design.

While starting the game off in a bland snowfield and then transitioning into a generic jungle might not have been the best way to kick things off, I can't imagine anyone being unimpressed with the nighttime beach assault that comes later. Its stunning seascape rages with a storm's fury as players get their first real taste of the powerful Vital Suits, and actually transforming from robot to vehicle mode to continue the assault is something that won't quickly be forgotten. Other scenes are just as memorable. Hijacking a giant transport ship while streaking across a sun-scorched desert was something straight out of a Hollywood summertime blockbuster, and the final push to defeat the giant Akrid absorbing the world's energy has to be seen to be believed. 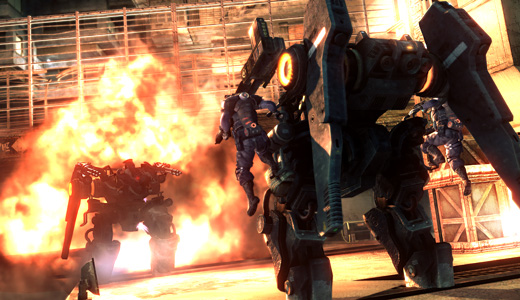 While the action is certainly strong enough to carry a player from beginning to end and the story eventually did come together in its own way, there's no getting around the fact that Lost Planet 2 did stumble a bit as it was blazing this mixed-design trail. In such an experimental title, a certain number of missteps are unavoidable, really. While most are just mildly irritating (convoluted menus, buddies who aren't as far as the host in the campaign can't join, the grappling hook doesn't work while jumping) my biggest gripe has to do with customizing characters for use in the online competitive modes.

While character appearances can't be changed the first time through the campaign, players do have the option to customize their avatar when going online. Scanning through the menus and looking at the different options that can be tweaked, it's clear to see that there's a fairly substantial amount of depth there. Weapons can be upgraded and altered, attributes can be reassigned, and different outfits or skins can be equipped on the characters to make them visually distinct. The problem is that the game is ridiculously tight-fisted in doling out these options, taking far too long and requiring far too much effort to earn.

It's true that certain items can be unlocked simply by leveling up, but most of the items used in customization must be won via the game's random "slot machine" function. By spending points collected during play, players can take a spin with the hopes of winning a new weapon or piece of clothing. However, what usually happens is that the game sucks these hard-earned points away in exchange for Noms de Guerre (trite nicknames that others can see) or "emotes"—physical actions like giving a high five or jumping up and down for joy. Neither of these worthless things has any effect on gameplay, and it was incredibly demoralizing to get through the entire campaign and several hours of multiplayer matches with my only substantial extras earned being one new gun and a few minor abilities to show for it. Player customization is a huge focus in the industry these days, and I'm sad to report that Capcom has completely misinterpreted the correct way to do it.

My frustration with the customization aside, there's no denying that Lost Planet 2 is an interesting and engaging hybrid title that delivers a new blend between traditional solo play and modern multiplayer expectations. I can't say that the developers totally nailed it, but with solid mechanics, a strong sci-fi theme, exciting action and tons of large-scale watercooler moments, I do recognize it as an experimental step forward that succeeds far more than it fails. Rating: 8.0 out of 10.

Parents: According to the ESRB, this game contains animated blood, language, suggestive themes, and violence. Moms and dads should know that this game is built on weapons-based combat. Although there are certainly a fair number of monsters to take down, the bulk of the shooting is directed at enemy combatants who are all human and wearing various pieces of armor. It's not incredibly graphic violence, but it's still violence nonetheless. There were a handful of swear words during the cut scenes, but nothing excessive. I did not see any sexual content besides some of the female avatars online wearing vaguely skimpy outfits.

Deaf & Hard of Hearing: You  shouldn't have much difficulty with the campaign. All dialogue is subtitled, and there are visual on-screen representations when the player is under fire. During some heated exchanges, it can be hard to tell who is shooting from where, but that's not something due to audio—as a player with perfectly normal hearing, I got lost in the chaos a few times myself. Player chat is enabled online, but in the time I spent playing, most of the chatter was about completely irrelevant subjects. Players who are not able to hear online discussions aren't really missing much, if you ask me.

I agree with because with I started playing it felt mediocre and tarnished but as the game progressed it became more full-bodied and intricate. Especially with all the cover shooters I think it’s a nice change of pace and certainly worth buying.

Nice review. This is the first review that makes me want to actually play the game. I played the beta and enjoyed it, but all the previous reviews soured me on the single player. Your’s has rekindled my interest to play the story. Thanks!

It’s nice to see someone else that appreciates what lost planet 2 does with its’ story, despite outward appearnces it’s realativly subtle. Which I think is actually a good summation of the whole thing, the best examples are of this are 1-2 and 3-3, both levels contributed to a realisation of the incredible cunning of the devs. 1-2 highlights how much thought capcom have put into providing meaningful decisions in how you approach challanges, namely take the easy direct route and face the boss without many weapons, and less loot, or take the harder, secret level and end up with… Read more »