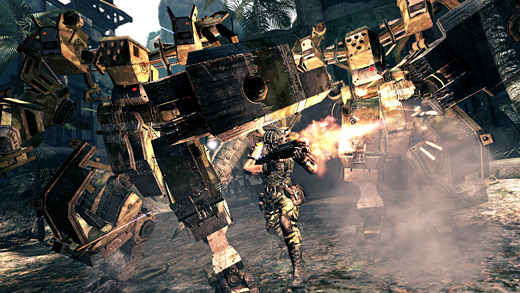 So, Capcom was gracious enough to invite me in to get a sneak peek of Lost Planet 2's multiplayer the other day. I'd never been to Capcom before and there were a ton of great review/journo people as well, so it was truly a double treat to attend the event.

Before getting into Lost Planet 2, I need to first disclose the fact that I enjoyed the original Lost Planet a great deal. If you haven't already read my formal opinion, here you go. (Go ahead, click it. I'll wait.) Although the game got a fairly rocky reception in review circles, I found it to be a fantastically good time, and absolutely on the right track. Simply put, I'm a fan.

With that disclaimer aside, I left the demo feeling very positive about what I saw. Although we did not get a full and complete look at the whole game, there is very little doubt in my mind that Lost Planet 2 will surpass its predecessor.

Overall, there were two main themes to the content: Customization and Mecha.

Looking at the customization first, the Capcom reps made the point over and over again that the player's character is meant to be a unique, personal avatar for use in both the main campaign mode as well as online. We were quoted that (at the moment) there's at least seventy thousand possible permutations of a player's avatar, and that number is likely to grow prior to the time the game hits the shelves.

In addition to physical appearance and clothing, weapon customization plays a large role. There were several classes of weapons that each player will have access to, and each class has several different styles and levels of power. For example, in the "heavy" class, characters can choose to have a rocket launcher or a pistol-like hand cannon. Each of those weapons has several different styles and variations, and so on. 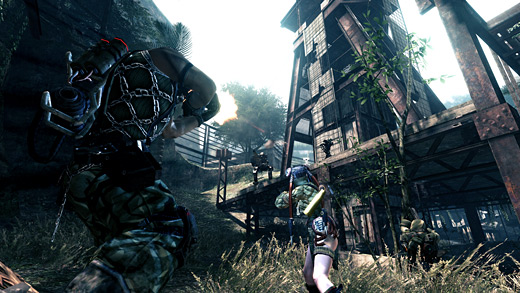 When asked about acquiring the different options, reps stated that while some items would be preset and specific to certain conditions in the campaign or tied to in-game achievements, players would also collect credits that would be used for a slot machine-type mechanic that would randomize the gear people get. Not sure I'm sold on that particular concept, but I remain hopeful.

Although we weren't allowed to change any of the settings in the demo, it was pretty clear to see that there is huge potential for each person buying the game to have their very own customized character, and that's always a good thing.

Moving on to the mecha, all I can say is "WOW". It's no secret I'm a nut for giant armored things, and Lost Planet 2 is absolutely filthy with them. These "Vital Suits" are definitely a major focus of gameplay, and they've been revamped in every way possible.

For starters, the number of different models was incredibly impressive. I got to play the demo for around three or four hours, and it seemed as though every time I looked at someone else's screen, I was seeing a new VS I hadn't seen before.

The smallest was almost like a thick suit of armor that encases the player's body and functions like an extra life bar. Moving up in scale, there were several small "platform" types that were sort of like Segways with guns, both terrestrial and airborne. Even bigger were tanks, bipeds designed for melee, lighter units that can transform between walking and hovercycle modes, and so on.

The heaviest Vital Suits on display were extremely impressive. The first was a three-part walker that was piloted by a player in the middle and had two independent gun platforms on either side. Even larger than that was a massive giant spider that had been outfitted with cybernetic armor implants. Towering over the players on foot, it appeared to be able to hold four or five players, each controlling their own set of weaponry.

(Oh, and the best thing? There were several mentions of a two-part Voltron-style combiner that will be available, though it was not running in the demo.) 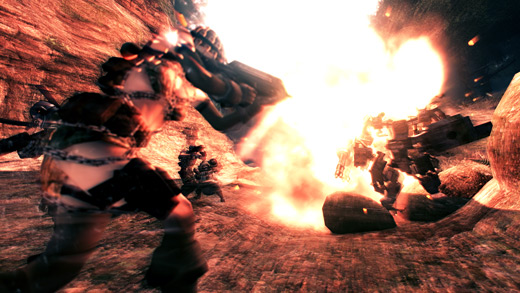 The most interesting and exciting thing about the expanded focus on Vital Suits was that so many of them were able to fly in some fashion. In a level that strongly resembled an oil rig, I hopped into an assault helicopter and proceeded to pick people off the platforms at will—definitely a high point of the demo. Another helicopter was designed for transporting ground troops, and many of the lighter (or even medium) Suits were capable of taking to the skies. My mind was blown when a cyborg scorpion piloted by the enemy team leapt straight up and exposed membranous wings before sniping rockets from above. To say it was completely unexpected is a massive understatement.

Differences between the 360 and PS3 were basically nil. Some people at the demo felt that the 360 graphics were sharper, while others were sure that the PS3 had the edge. Although I did spend more than a few minutes trying to suss out which one was superior, I think it's a nod to Capcom that they were basically identical even on a nitpick scale. Honestly, I could not tell the difference.

One final note, reps at the event said that the game has a multiplayer focus in both campaign and competitive modes. When asked to clarify, the answer was that the traditional story mode is meant to be played with at least one other person, if not more. Co-op is absolutely being positioned as the preferred method, and AI bots will be available for people who do not have friends on-hand when playing story mode. It was also noted that players who are intent on going alone will have the option, but that the game does not scale difficulty down for people lacking backup. You've been warned.

Capcom has stated that the Lost Planet 2 multiplayer demo will become available to the public on April 21 (unless you're a Capcom Unity fan or win a code via contest) and the game itself will launch on May 11.