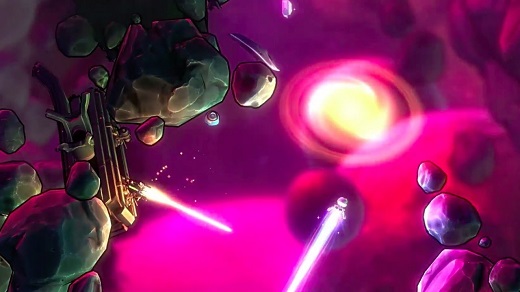 HIGH A neat premise with lots of charm.

Lost Orbit is a puzzling game. Is it a charming indie tale of a man's will to survive in deep space, or is it a twitch-reflex scorechase? Either one would be fine on its own, but when combined together as they are here, I'm not sure either half works.

As the game begins, it seems to be a small-scale narrative about an interstellar repairman stranded an infinity away from home after his ship gets destroyed. He's got no reasonable expectation of making it back alive, but he sets out to do so anyway. After rigging together a makeshift jetpack, he rockets toward Earth with little more than a prayer…

At this point, I was pretty sold on Lost Orbit. The character, Harrison, is cute in appearance and the idea that he's struggling against all odds to save his own life is something that greatly appealed to me. The proceedings are narrated by a robot drone which soon joins Harrison on his journey, and the elements for a thoughtful tale were in place.

However, it wasn't long before the narration sequences started coming further and further apart, and the developers shifted the experience towards being a twitchy, dodge-everything-on-the-screen score attack. Collect gems, avoid crashing into meteors, and get to the finish line as quickly as possible to rank high on the leaderboards!

At this point, confusion about what the game wanted to be set in, and it set in hard.

As Harrison drifts through space with his robot buddy, Lost Orbit has a mellow, relaxed tone. If the turbo boosters aren't engaged, the pair slowly pass by heavenly objects, and things are contemplative in nature. On the other hand, the game incentivizes the player to go as fast as possible via rankings and times for each run, and the focus on high-speed reflexes seems utterly at odds with the story side.

While the game is a short one (forty-ish levels, each just a few minutes long if not going for a perfect score) there wasn't enough depth to the gameplay to make it compelling to me in a pure performance sense, and there's not enough story to support how much game there is. I could only play two or three levels at a time before getting bored, and after making it two-thirds through, I was done with it.

Lost Orbit can't make up its mind about what it wants to be, and the result is neither a touching tale of survival nor technically-compelling arcade-style action. It's not a bad piece of work and would certainly shine with better integration of its elements, but design confusion is its most notable characteristic, and that's not a good place for a game to be. Rating: 6 out of 10.


Disclosures: This game was obtained via publisher and reviewed on the PS4. Approximately 2 hours of play were devoted to the single-player mode, and the game was not completed. There are no multiplayer modes, although there are leaderboards.

Parents: According to the ESRB, this game contains: violence, blood and mild language. It's a little excessive with the blood (relative to the overall cutesy factor) when the character slams into a meteor and some of the lines in the script are a bit jarring, but overall it's pretty safe.

Deaf & Hard of Hearing: The dialogue is subtitled and there are no audio cues needed for successful play. It's fully accessible.