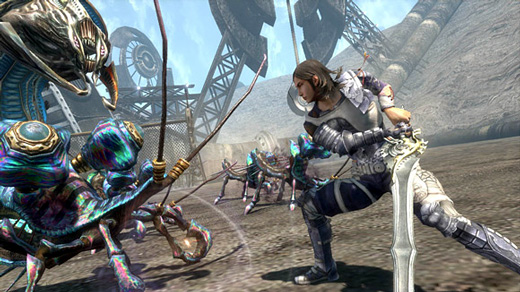 I started playing Lost Odyssey (360) a few days ago. This selection may surprise to some people since it's rare that I'll play a Japanese RPG that doesn't have Shin Megami Tensei in the title, and there are a few reasons for that…

…Anyway, finding a JRPG that has something new to offer is difficult. However, a fair number of people whose opinions I value (including SINAN KUBBA) recommended Lost Odyssey, and for whatever reason, I was in the mood for a JRPG. Apparently the stars were in alignment because not only was my head was in the right place, but Lost Odyssey (8hrs in) has been a great experience so far.

While the nuts and bolts of play are fairly standard for the genre, I've been consistently impressed with the writing, and more specifically, the characterization of the cast. The game's protagonist is an immortal man who's been alive for over a thousand years. The writers really dig deep into how that would affect the mindset of such a long-lived person, and it's fascinating to see the way they cover it without beating it to death with obvious tropes.

The supporting characters so far have been quite good as well (Wise-cracking Jansen is impossible not to like) and I've been very impressed with the subtlety and depth on display during the cutscenes. The camera will frequently take cinematic angles or cut away to another character, and the animators have done a great job incorporating small motions and body language that most games completely overlook.

I'm still quite early in the adventure but Lost Odyssey has certainly been a rare treat so far.

Speaking of SINAN KUBBA, the latest episode of Big Red Potion is now up and ready for download. Guest-starring myself, @ChrisGreen87, @EddieInzauto, and the always-smartly-groomed @MrDurandPierre, the topic on hand is an in-depth examination of the under-rated critical fave Nier (PS3/360).

…Wait, did somebody say Nier?!?

File this under OMFG (maybe) Good News, Sony has announced a new initiative to "remaster" select PSP titles and make them playable on the PS3. The first? An HD version of Monster Hunter Portable 3rd. Check out the direct comparison, and start imagining how awesome it would be to play this game on a big TV with a real controller.

So why do I file this under "maybe" good news? It hasn't yet been announced for release in the USA… Come on, Capcom. Do the right thing. 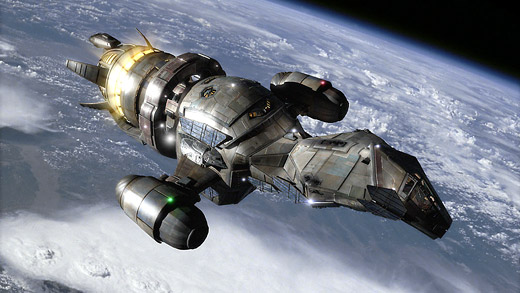 I know I'm insanely late to the party on this one, but the wife and I just started watching the long-defunct Firefly thanks to NetFlix on-demand. I've heard about it for years and I know that it has a pretty rabid fan base, but for whatever reason I've never sat down to see what it's all about. Until now.

At this point we are about five episodes in and (so far) I think it's pretty good.

I'm definitely a fan of mixing genres, so Western with Science Fiction is right up my alley. I can certainly see why it got killed off so quickly, though. It's not hard to imagine all of the puzzled looks from people who didn't know what to make of it before quickly flipping channels to the nearest sitcom or reality show. It's certainly a shame, but I think history has proven time and again that smart, quirky shows tend to fly over the heads of the general viewing audience to end up on the chopping block sooner rather than later.

Side note: Whoever designed the show's spaceship should be ashamed of themselves. It's one of the ugliest crafts I've ever seen, looking awkward, ungainly, and generally like it should have spent another week or two on the drawing board. Every time I see it flying, I physically cringe. Someone really thought that ship looked cool enough to put into production? REALLY?

“If you like Firefly then you should check out Serenity, which is also available for streaming. It’s the movie Whedon made after Firefly went off the air. It’s really good. A whole lot better than anything they did on the show.”

No, don’t watch Serenity if you like Firefly. It’s terrible from a fan perspective, a bit of fun if you haven’t seen Firefly/didn’t like the characters in it.

Complaining, but not excessive complaining.

Once you’re done having fun in space, go to some W40K, your soul must be cleansed.

As others have said, watch SERENITY after you watch all the Firefly episodes. And if you’re still depressed about the short life-span of this series, go and watch COWBOY BEBOP, which is just as good and has pretty much the same concept.

[quote=Alex]I felt like the whole point of Firefly (the ship) was it was an awkward, ungainly lump of junk on the ground – but in space, it became a thing of beauty for its crew.[/quote] Indeed. Judging the series against design or tropes of other series is missing the point. Its an experimental show made on a small budget. For me what it is about is life on the fringe of a culture that has become a militarized mesh of eastern and western influences. Personal faves? ‘The Message’ (one of the best uses of irony ever, and a strong paean… Read more »

I felt like the whole point of Firefly (the ship) was it was an awkward, ungainly lump of junk on the ground – but in space, it became a thing of beauty for its crew.

If and when MHP3 HD comes out stateside (you KNOW it’s going to happen…probably this fall [fingers crossed]), you and I will have to do some multiplayer if it supports PSN for online play (hopefully the online matchmaking process will be easier than the convoluted Wii setup). I’m pissed off at Sony still for all the hacking junk lately…but man, MH3P HD is a game that’d make me put that frustration aside. JRPGs? You have played Persona 4 right? Loved that game (muuuuuch better than P3 – you can actually control your party and the characters/plot are more interesting). Also… Read more »

Lost Odyssey is a great game, but I’m curious to see what your reaction to the second disc will be, since it GREATLY spikes in difficulty (in my experience at least), so much so that I almost even gave up on it. The game gets much easier after that though, and by the end you’ll probably love it again. Also, and I feel this needs to be said: I still enjoy JRPGs MUCH more than WRPGs. And considering you dislike Dragon Age and were complaining about how stupid Mass Effect 2’s story was, Brad, I wonder what kind of RPGs… Read more »

I wonder if you would do another Lost Odyssey post once you encounter the children characters? They really spoiled my drive to continue and I’m curious if you have a similar take or why you don’t if you have a different take. As far as the ship from Firefly, I think (the Serenity) is supposed to be ugly. Like the Millennium Falcon which is summed up perfectly by Leia’s sneering assertion the moment she sees it for the first time: “You came here in that thing? You’re braver than I thought…” In one of the series’ best episodes, you get… Read more »

Yes, but for the love of God don’t watch Serenity until you’ve watched all of the Firefly episodes.

[quote=coyls3]If you like Firefly then you should check out Serenity, which is also available for streaming. It’s the movie Whedon made after Firefly went off the air. It’s really good. A whole lot better than anything they did on the show. [/quote]
I thought it was more like a phoned-in action film for people who didnt like the show. Looks fine in hi-def tho.

Yay ofr Lost Odyssey, one of the reasons I chose 360 over PS3.

If you like Firefly then you should check out Serenity, which is also available for streaming. It’s the movie Whedon made after Firefly went off the air. It’s really good. A whole lot better than anything they did on the show.