I've called it quits on Lost in Shadow (Wii) and submitted a review. It should be up soon and it's not a positive one.

While I think the premise of playing as a shadow is strong, the developers completely squander its potential by creating a repetitive, tedious and sickeningly bloated platformer that would have easily run on the Genesis or Super NES. I say this not to slander the 16-bit era, but rather to point out that the developers have utterly failed to capitalize on the strongest asset this title possesses, and instead offer something that feels incredibly dated and bereft of creativity.

Countless titles have come and gone since those golden days, and Hudson seems to have ignored nearly all the innovations and leaps forward since that time. Great idea, terrible game.

Being the immense Phoenix Wright fan that I am, I had high hopes that Shu Takumi's new work would be of a similar quality, and I was not disappointed. While the concept of playing a ghost that can possess inanimate objects has been done before (anyone remember Geist on the GameCube?) it's never been done as well or as stylishly as it is here.

The graphics and animation are top-notch, the writing is clever, and the gameplay feels fresh, engaging, and new. Controlling a disembodied spirit that navigates each level by jumping from object to object is quite entertaining, and the time-travel-to-change-destiny mechanic is pulled off admirably.

I have nothing but praise for Ghost Trick so far, and I'm loving every minute of it. If you haven't checked it out yet, do so now.

The string of UK programs viewed at my house continues. This week, the wife and I started Being Human… although, how we began this show was a little unusual.

I had heard of the series for quite a while, and the basic concept of a vampire, werewolf and ghost living together in an apartment was weird enough to get my attention right off the bat. However, we never got around to watching it for one reason or another, until this week. The twist is that this show was adapted for the SyFy network, and is currently airing in the United States with a completely different cast and altered storyline.

We had no idea whether the US or UK version was better, so we decided to watch the first episode of each before committing to the rest of the series. 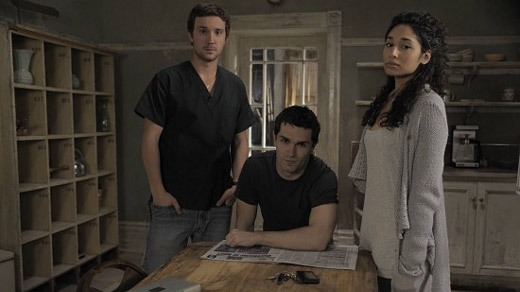 We started with the Americanized SyFy version first. It got off to a bit of cheesy start, and in general it was dark and had something of a grim tone to it. It certainly wasn't bad, but I don't think either the wife or I felt an immediate connection to it.

The next night, we watched the UK version and it was quite interesting to see (basically) the same material interpreted in completely different fashion. 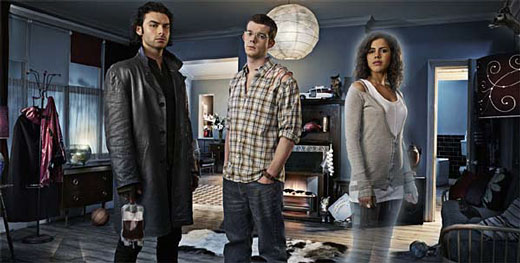 The UK episode didn't have the same dark, violent streak and had quite a bit more humor… nothing slapstick, just a natural amiability of the characters. Despite being lighter, I think we both agreed that this version didn't have the same cheese factor. Also, when the episode began, we both bought into it immediately, and the way the director established events felt very natural and free-flowing.

The final deciding factor was the cast.

Between the US and UK actors, we both strongly preferred the UK folk. A large part of that probably had to do with the material they had to work with, but the UK version's werewolf (Russell Tovey) was an instantly-likable nerdtastic goofball, and the UK ghost (Lenora Crichlow) was written in more relaxed fashion… she was able to touch other people and interact with physical objects, while the US version was not. It may seem like a small thing, but to me it said that the writers were more interested in focusing on the character rather than establishing a set of rigid rules that might hamper development later on. Of course, I could be completely wrong, but that was my general first impression.

As you probably guessed by now, we decided to commit to the UK version of the show, and we proceeded to watch the next two episodes as well. So far, we haven't been disappointed…