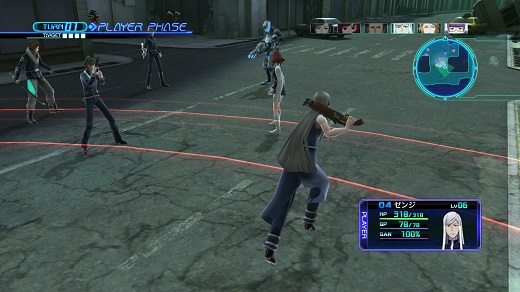 LOW The final area's difficulty spike is a bummer.

WTF It's kinda weird to call him ‘The End' all the time.

Lost Dimension seems to be flying under everyone's radar at the moment, and it's a shame since it could be loosely summed up as XCOM meets Danganronpa meets psychic powers. I mean, what's not to like about that combination? The seeds of greatness are here, and co-developers FuRyu and Atlus come close to knocking it out of the park.

As the game begins, the player wakes up in a mysterious tower alongside ten other members of a strike force boasting an array of psychic abilities. At the top of the tower is an enemy named The End (yes, that's his name) and he'll destroy the world unless the team makes the ascent and takes him out of action.

To roughly sum it up, Lost Dimension is made up of two parts; the combat and a ‘traitor' element.

As they climb the tower, the team will be presented with a series of missions that play out in turn-based strategy-RPG fashion. It's similar to XCOM or Fire Emblem, but not quite as in-depth, and the variables to take into consideration are simplified. This isn't a criticism, though. Due to the streamlined nature of each round, combat flows quickly and it's quite easy to grasp, especially for people familiar with the genre.

While the core of this action is fairly boilerplate, there are a few very clever tweaks that make it stand out from others in the same class. For starters, the psychic powers.

Each character has something different to add, and the way the abilities manifest is quite interesting. One character can fly, so her mobility is incredibly high and she sails over tall obstacles. One teleports, so he can pass through gates or warp behind enemies for critical hits. The main character has precognitive skills, so he can attack enemies before they strike, or dodge attacks before they land. These little twists in ability design are quite cool, and I enjoyed them a great deal.

There are several other surprises in store. Since they're all psychic, the game posits that the teammates can transfer energy to each other as needed. What this means is that one character can skip their turn to let a different character go twice—it's incredibly useful! I'd often throw my tankiest brawler into the middle of a group and have supporting characters give all their turns to her, letting her iron-hard fists make short work of the enemy. On top of this, there's a great system where characters can get extra attacks in if they're close enough to a teammate, so success often hinges on placing characters strategically in every round. Overall, it's a great system that's not overcomplicated, yet offers a satisfying amount of depth.

However, the SRPG side is only part of Lost Dimension. The other chunk is that the game has several visual novel elements and a ‘find the traitor' mechanic similar to the one seen in 2014's Danganronpa.

Between missions, the characters have a chance to talk with each other, and while the characterizations don't go as deep as I would have liked, each one has a few quirks and a bit of personality. However, there's always one traitor in the group who is working for The End, and it's up to the player to figure out who it is before the "judgment" that comes at the end of each major section.

This mechanic of being able to trust no one is an intriguing one, and was used to great effect in Danganronpa. In that game, someone in the group was murdering the others, so in order to progress, players had to solve each death and find the guilty party. The concept was clear and the motivation was significant. In Lost Dimension, the developers have followed the form, but the function feels a bit absent.

For example, while I was still learning the game, my group ended up eliminating an innocent person instead of the real traitor. I was sad, but also curious to see how it would turn out. Unfortunately, as far as I could tell, having an active traitor in a group has absolutely no effect. The person never turned on me in the middle of combat, they never disobeyed orders, and they never sabotaged the group. It was disappointing to see that there was no consequence for failing to choose the real culprit, and I felt like the developers missed a trick here.

Even more disappointing is that Lost Dimension has a surprise spike in difficulty in the final cluster of levels. During the campaign, I had little trouble progressing, usually passing each mission on the first try, and not suffering too much adversity. Once I got to the endgame, my characters started dropping like flies and I began failing missions left and right.

This increase in difficulty was abrupt, and as far as I can tell, the only way to get past is to grind for EXP and the cash to buy expensive weapons. Although I was enjoying Lost Dimension until this point, repeating missions I've already completed just to survive the final few levels was not at all appealing, and I ended up putting the game down in disappointment. I haven't been motivated enough to come back to it yet.

I hate to end the review on a sour note since Lost Dimension has a lot of great ideas, and I do think it's a strong addition to the SRPG genre. If not for the endgame spike in difficulty and the traitor mechanic which doesn't feel fleshed out, it would be an automatic recommend to anyone who enjoys this type of game. Don't get me wrong, though—there's still a lot to like, and it still earns a cautious thumbs up as long as prospective players don't mind a bit of endgame grind. Rating: 7 out of 10.


Disclosures: This game was obtained via publisher and reviewed on the Vita. Approximately 22 hours of play were devoted to the single-player mode, and the game was not completed. There are no multiplayer modes.

Parents: According to the ESRB, this game contains: language, mild blood, suggestive themes, and violence. The bulk of play is seeing human characters shoot robots, or seeing robots shoot human characters. It's not very graphic at all (no gore or close-ups) and the language and themes are pretty negligible. I'd say it's quite safe for anyone old enough to understand how to play it.

Deaf & Hard of Hearing: All dialogue is subtitled, and there are no audio cues necessary for successful gameplay. It's totally accessible.