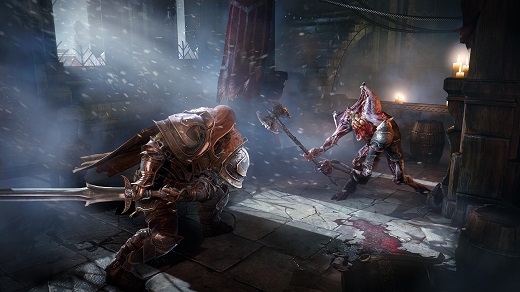 HIGH Enchanting the Gauntlet with fire makes for a neat projectile weapon.

LOW The third boss is ten times harder than the two bosses that precede him.

WTF I stabbed you in the back. How is your shield in front blocking that?

People say that imitation is the sincerest form of flattery, and I think that's absolutely true. However, if the object of adoration is still around, then there's little use for an imitator unless it improves on the inspiration or twists the formula in some new way.

To even casual observers, there's no question that Lords of the Fallen has been more than inspired by the now-infamous Souls series—much of the game's structure is lifted wholesale and the parallels are clear to see. However, in emulating Fromsoft's work, CI Games has failed to grasp the core of what makes it so noteworthy and compelling. They haven't expanded upon what already exists, and the result is a lesser, less satisfying experience.

In Lords of the Fallen, the player takes control of a convicted criminal, released from jail because he's one of the only men left who is "hard" enough to take on forces from another dimension who are invading the land. It's a fine premise, but the "hero" isn't much of a character, and neither is the supporting cast. Although there are occasional sidequests and a few instances of talking to friendlies in the world, the game largely hinges on its action. Unfortunately, this is exactly where it doesn't measure up.

At first glance, this third-person adventure set in a dark, hostile world seems like it might pass as the next entry in the Souls series, but just a few minutes of play will quickly reveal the differences. Despite its veneer, the technical side of Lords can't deliver the sort of spot-on, precise play that this sort of game demands.

The most noticeable thing is that the combat feels sluggish and un-tuned unless using the lightest weapons available. I found a whole pile of greatswords and giant axes during my session, but they take so long to swing that they're largely ineffective until the player's stats get so high that they can tank through anything. I've heard the developers say they were interested in having a "real" combat system in terms of weapon weight and animation, but when playing a character encased in head-to-toe armor who fights demons from another dimension with a sword that's bigger than a house, realism doesn't need to enter the equation at any point there.

Rubbing salt in that wound, the enemies don't seem to suffer from the same slow motion issue that the player does—they swing huge weapons with little problem, they recover much faster from attacks, they can rotate as fast as the player can circle around, they don't always get stunned when taking a blade to the face and often attack in the middle of receiving a hit. There's no grace to this combat.

The collision detection is also problematic. I would regularly see my magic projectiles pass straight through enemies, some strikes that were dead-on wouldn't register, and then there was my favorite thing: hitting an enemy square in the back regularly counted as "blocked" even though the enemy's shield was in the front. Enemies that feel like they're cheating and a collision system that can't hold its own are absolutely counter to the style that Lords is shooting for, and the action never rose above the average fantasy-based hack-and-slash.

In terms of level design, the world is unmemorable generic gothicness, and I found it difficult to navigate despite the fact that it's fairly linear in most sections. The hallways and rooms aren't very distinct from each other, and everything blends together. Between the design's sameness and whirling the camera around while fending off attackers, I would often lose track of where I came from and where I was going, and being disoriented was a frequent occurrence. Compounding this, I found it hard to tell where places were in relation to each other. When a popup told me to go to the Citadel to continue the storyline, I had no idea what it was, where it was, nor how to get there.

To be fair, Lords of the Fallen isn't terrible in any way, it just fails to measure up to its inspiration by every conceivable measure, save perhaps "easier." An argument could be made that Lords is more approachable and less hostile to newcomers (and there's merit to that) but no aspect is especially enjoyable or interesting, so recommending it based on the difficulty relative to something that's vastly superior doesn't make a lot of sense to me.

Although it's probably inevitable that "Soulslike" is a genre that's going to happen, anyone attempting to crack into this category has a high bar to clear—there's a lot more to the success of Souls than dark shadows, big weapons, creepy monsters and recovering experience from the spot where you died. Lords of the Fallen may be successful at replicating some of the form here, but it has a very shaky grasp on the function. 5 out of 10


Disclosures: This game was obtained via publisher and reviewed on the PS4. Approximately 12 hours of play were devoted to the single-player mode, and the game was not completed. There are no multiplayer modes.

Parents: According to the ESRB, this game contains: blood and violence. The game is creepy and it's all about stabbing (or being stabbed) by monsters and evil knights. It's not extremely gory, but it's probably too intense for small children. There is no salty language or sexual content.

Deaf & Hard of Hearing: All dialogue is subtitled, but there are occasional environmental sounds (monster growls, etc.) which are not visually telegraphed. It's a relatively minor issue since the game does not hinge on audio, but be aware that monsters might occasionally pop up unexpectedly for players with hearing issues. (Though to be fair, it happens to hearing players too, I'd say.)

Excellent review, very perceptive and nails the failings of the game with great precision.

That said, while I strongly agree with the points raised, I’m not finding them impair my enjoyment of the game too much – it’s a fun and entertaining romp and I’m enjoying it a lot. I’m on my way to meet the final boss now (the boss battles have been pretty underwhelming too) and it’ll be the first game I’ve seen through to the end for quite a while.

Hey Crofto! >>User Interface looks slick, stylish and is intuitive. Demon/Dark Souls has had the same piss-poor UI (pulled straight from a PS1 title) for each iteration. It’s a preference thing. I thought LotF’s menus were overly busy and weren’t really that great. >>Technically LotF blows DS away. Textures, lighting and overall visual fidelity is actually worthy of the console/hardware it is running on. Well, LotF is running on PS4/XBO. Naturally, it looks better. I’ve heard that DS2 looks pretty fab on PC with max settings, but who knows. I think a better comparison will be LotF and Bloodborne. Same… Read more »

Yes, exactly. You are a brave soul for criticizing the holy Dark Souls series, sir. But no, all good points. Dare I say I had to slog through so much of Dark Souls that felt ugly and underdeveloped. LotF mostly felt intuitive and had a much more aesthetically interesting art style. It’s a bit disappointing that it seems a lot of reviewers are keeping it down. Good thing for Steam sales.

I think LotF does several things that From Software could learn from: – User Interface looks slick, stylish and is intuitive. Demon/Dark Souls has had the same piss-poor UI (pulled straight from a PS1 title) for each iteration. – Technically LotF blows DS away. Textures, lighting and overall visual fidelity is actually worthy of the console/hardware it is running on. DS titles look and run like games released towards the end of the PS2’s lifespan. Heck, even God of War II looks better than Dark Souls II, technically speaking. – Weapons and armour available look menacing and look cool. Souls… Read more »