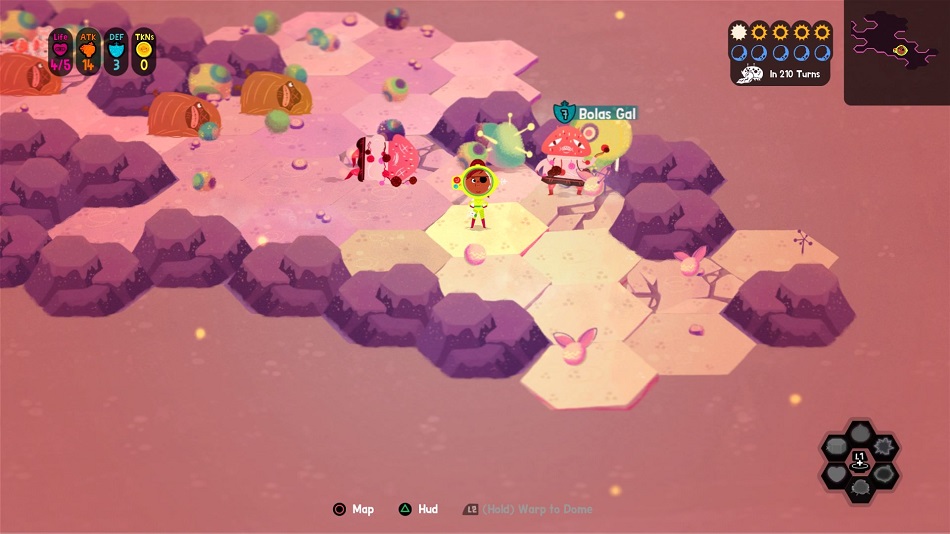 LOW No saving mid-game and no progression unlocks.

WTF The meat-monster from another dimension has a fantastic voice.

Few genres can be as punishing and difficult as a roguelike, yet these games are often uniquely strategic, tense and rewarding… When they’re done well. I’m a fan of the genre when the ducks all line up, and fortunately, Loot Rascals from developer Hollow Ponds is one of the good ones.

The premise of Loot Rascals is slightly silly, although it’s appropriate given the colorfully abstract visual style — the player is a strange little astronaut on a mission to locate a terraforming robot gone missing. The twist is that a Lovecraftian nightmare from another dimension is somehow in communication with this ‘bot, and wants your help to recover it… for itself. While you both seem to have the same goal, working together might not have happy results.

This narrative twist is a clever conceit supporting Loot Rascals as a roguelike — every time the astronaut dies, he or she loses all of their loot and goes back to the beginning as one might expect. However, this otherworldly creature is what brings them back to life in order to try and try again. It wants the astronaut to succeed to further its own ends, so it uses cosmic power to rewind time for an infinite number of attempts. While this fiction has nothing to do with the game in a practical sense, from a creative perspective, it was appreciated.

However, despite my appreciation of the concept, any roguelike lives and dies by its systems, and Hollow Ponds has them remarkably dialed-in here.

Loot Rascals is basically split into two halves. The first is moving the astronaut around a hex-based map. In true roguelike fashion, the game is entirely turn-based, meaning that enemies only move when the player does, allowing time for strategic positioning. 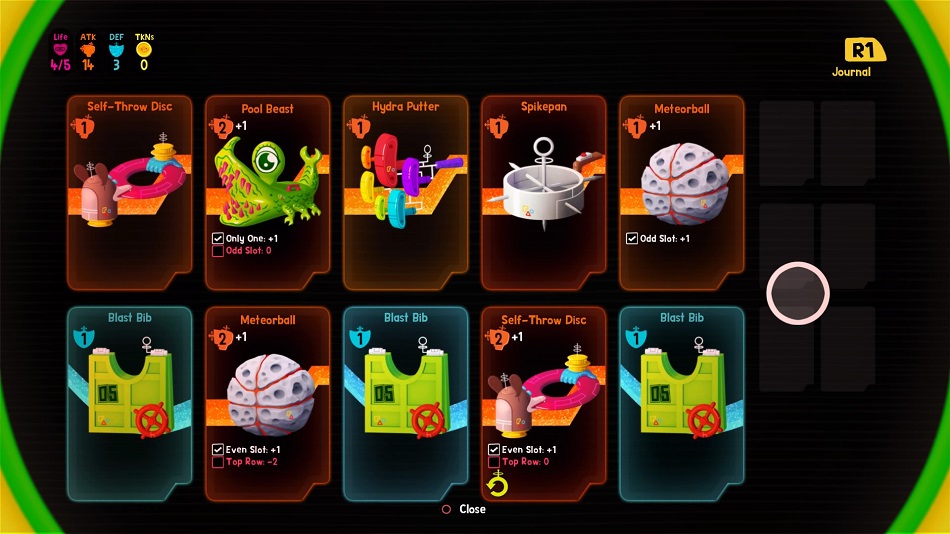 The combat is quite streamlined – players can easily see ATK/DEF stats for themselves and of monsters roaming the maps. Enemies go back and forth between attacking and defending phases, so with some judicious movement, players can ensure they get the first hit in. If their attack power is high enough, they’ll take the opposition down in short order. If moves are mistimed and engage when a creature is in its offensive phase, things might not go so smoothly.

The other half of Loot Rascals is inventory management, and it’s just as pleasant as the combat.

Enemies drop cards that represent weapons or armor, and these can be equipped on a 2×5 grid when the game is paused. At first, they’re simple stat increases to the astronaut’s ATK or DEF, but as the game progresses, the cards get more complex. Some get a bonus if they’re used in an odd-numbered slot, some boost the card that’s below them, some get penalties if there are duplicates being used, and so on. It sounds complicated but the UI is superb and it’s easy to grasp. With a little card-juggling and proper placement, stats can be greatly boosted and the astronaut becomes a killing machine.

Unfortunately, while Loot Rascals scores a direct hit in most areas, it also misses in few. The first thing that cropped up was that there’s no way to save a game in progress – players must finish in one sitting. This is terribly inconvenient for anyone with a life, and inconsiderate of a player’s time. Roguelikes commonly have a suspend feature that lets people step away without losing progress, and there’s no reason it can’t be done here.

Another issue is that there are no unlockables or progression. In recent years, devs have realized that some players dislike starting completely over after a defeat, so they’ve added systems that provide incentive to keep pushing on. A player might not roll credits, but they can unlock a better gun for the next run, or they might earn some skill points to put towards better starting stats, for example. Loot Rascals has none of this, and embraces the traditional, harsh nature of the genre. Die, and it’s back to square one in every sense. A few carrots held up here would go a long way, I suspect.

Finally, while I appreciated how slim and streamlined the systems are, I’m guessing that genre vets might find it a bit too simple. With nothing to work towards or unlock, runs often boil down to hoping for good drops to buff the astronaut’s stats ASAP. If the drops don’t come, there isn’t much technique or complexity to compensate – rich roguelikes give players several options and challenge them to make the most with what they have, but Loot Rascals feels more like a straight-up crapshoot than most.

While Loot Rascals isn’t the deepest roguelike I’ve ever played, I still adore its elegance and accessibility, and let’s face it, that artwork is charming as all hell. And besides, for a genre that’s generally known for being ultra-hardcore, I can’t help but appreciate an entry that takes a sunny, easy-to-grasp approach. My astronaut hasn’t recovered the terraforming machine yet, but I’m still trying to get her there and having a great time in the process. Rating: 7 out of 10

Disclosures: This game is developed and published by Hollow Ponds. It is currently available on PC and PS4. This copy of the game was obtained via publisher and reviewed on the PS4. Approximately 12 hours of play were devoted to the single-player mode, and the game was not completed. There are no multiplayer modes.

Parents: According to the ESRB, this game is rated E10+ and contains Fantasy Violence. The violence is seeing a spaceman shoot sparkles at goofy monsters before they fall over. It’s super harmless and I’d say it’s safe for anyone old enough to figure out the gameplay.

Deaf & Hard of Hearing Gamers: There’s very little dialogue, and it’s all subtitled. The game is turn-based and there are no auditory cues needed for play. It’s fully accessible.