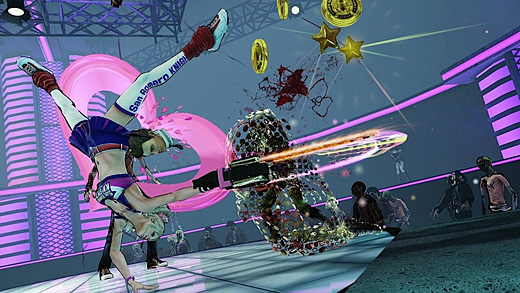 LOW Almost everything else.

On paper, blending zombies, Stihl-driven bloodshed, a rainbow-powered heroine and a thick dollop of sardonic humor seems like the recipe for a brilliant, can't-miss hit. If you ask me, it's got "cult classic" written all over it. However, in the latest release from Grasshopper Manufacture, game creator Suda51 and co-writer James Gunn give a master class on just how wrong such a thing can go.

This "no-brainer?" It's literally a no-brainer.

Lollipop Chainsaw stars barely-legal cheerleader Juliet Starling in a third-person, high scoring romp through the fictional town of San Romero as she wields her whirring weapon against hordes of undead. Someone's opened a rift to an evil dimension, so it's up to our heroine and her disembodied-head-for-a-boyfriend Nick (don't ask!) to save the day.

This setup would be fine enough for something that's as cleverly wink-wink as this game thinks it is, but shoddy mechanics, unpolished design, a script full of offensive material and constantly-whiffing jokes ensure this title will be in the running for "biggest misfire of 2012."

Lollipop Chainsaw's structure is quite simple, and will be instantly familiar to many. Each level is made up of areas that require a certain number of undead to be defeated before Juliet can move on. Decapiate X zombies, the door to the next zone opens, and Juliet totters ahead. Nothing fancy. Killing several at once awards bigger score bonuses and more money to be used for upgrades and unlockables. This old-school formula feels a bit tired but it might have turned out all right if not for the cumbersome combat that's in dire need of polish and refinement. 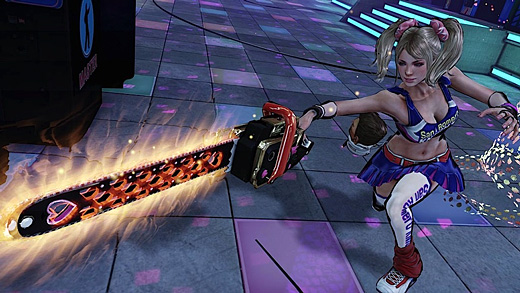 What's wrong with it? The controls feel laggy, pauses leave Juliet open for cheap hits at the end of combos, the auto-aim points anywhere except in the right direction, collision is unpredictable, and enemies often interrupt the player's attacks. With this kind of combat engine, no case can be made for the game on a pure performance level. It's a joke to think that players are supposed to replay for high scores when it's such an untuned mess.

Also problematic is the ineffectual camera that needs constant babysitting, the annoying mini-games that the player must suffer through to progress, and the incredibly frequent pauses for loading when transitioning between areas. At no point is the game able to let the player immerse themselves in cathartic slice-and-dice—the "action" stutters along in fits and starts, never kicking into high gear.

To be fair, hints of certain themes such as "fear of women" (via Nick the head) are whispered every now and again, but the script, dialogue and tone are all too erratic and unfocused, guaranteeing that none of the (assumed) attempts at subversiveness or commentary hit their mark. Further obscuring the writing is an almost pathological overabundance of profanity, sexual comments and filthy non-sequiturs.

To be clear, I have no problem with profanity when it's used smartly and appropriately, but that's just not the case here. There is nothing clever about a character telling Juliet he's going to put his "middle up her ass" or being called a slut, a whore, a bitch, or a thousand other epithets on a near-constant basis. Even worse, Juliet herself comes off as an insipid idiot, and is quite difficult to identify or sympathize with. While some people may want to project some imagined deep meaning into this scribbled mess, I found it closer to a full-tilt merry-go-round of tasteless elements and mentally stunted japes.

After sitting through the entire experience, I found Lollipop Chainsaw

to be a failure on every level thanks to the rough, unsatisfying play and a script and characters that are the worst of what video games can be. I'm all for edgy, challenging pieces that push boundaries, but this thing isn't hip, sassy, smart or sarcastic—it's just a lot of absurd, awful nonsense with pedo-bait breasts slapped on top. Rating: 2.5 out of 10.

Parents: According to the ESRB, this game contains blood and gore, drug references, intense violence, partial nudity, sexual themes, and strong language. No explanation is needed here—under no circumstances should kids be let near this. This game is everything parents don't want their children exposed to, all in one neat little package.

Deaf & Hard of Hearing: Basic subtitles are available for all dialogue and sound isn't a factor during gameplay. I found it to be fully accessible.

I think Brad pretty much didn’t understand any aspect of this game at all. It’s my favorite game of 2012 so far, eclipsing overrated mediocrity like Xenoblade Chronicles (which is an every day, run of the mill Japanese rpg that critics are raving about like it’s the savior of the genre). Getting high scores is easy and the combat system is up to the task for any player who actually knows what he’s doing. Setting up Sparkle Hunt kills for high scores is pretty simple by using Star Power mode for instant one hit kills in crowds of zombies, or… Read more »

I differ from Brad’s opinion of this game, though I do respect it. However, I feel he has missed something with his comments on the combat, along with many other critics. Most DMC/God of War type games reward combos, getting consecutive hits without getting interupted by an enemy attack. Lollipop Chainsaw rewards killing multiple enemies at once, specifically 3 or more in one chainsaw swing. This requires a different approach, softening multiple enemies, evading attacks, all the while herding zombies together for the final blow. Getting this “sparkle hunting” attack together, in my opinion, can be very satisfying (especially with… Read more »

My well-honed gamer antennae told me I wasn’t the target market for this game. Your review reinforces my faith that yes I am not a teenage boy and thus, this game just isn’t for me.

Subversive would be putting a fully-fleshed out female character who exists beyond T&A. A cheerleader with a chainsaw, not so much. How about a non-sexualized fifth grade English teacher defeating wave after wave of infected students, PTA and school personnel while trying to keep testing scores high- now that’s something I haven’t seen yet.

Well, this was quite a short review, but I could still see where you’re coming from. I won’t comment on the style or writing as that’s certainly up to taste, but I’ll say I have heard very differing opinions about the combat, so I’m curious to see which side I’ll belong to once I get to play it… because I will.

Still didn’t quite see what you considered to be offensive about this game, though. Is it just the unappropriate profanity and name-calling? I have to wonder, because my perception of what’s offensive would be something different entirely.