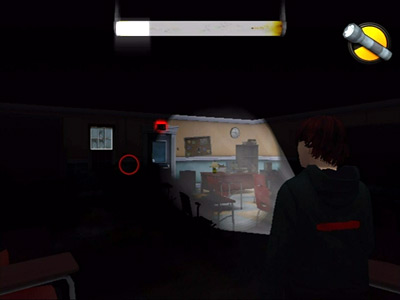 WTF Who did the atrociously poor job of wiring the school?

An interesting, engaging example of the kind of experience that can only be had via today's download services, WayForward's Lit is definitely one to take note of. However, the game trips up in a few areas and stumbles where it should shine. Though the bright ideas on display might be a bit dim thanks to a few irritating issues, it's still one of WiiWare's better offerings.

Unlike just about anything else I've played lately, Lit certainly has an identity all its own. Best described as a combination of puzzle and horror genres, the game takes a less-is-more stance and drops the player straight into a haunted school without any tutorials or introductory cut-scenes. After a brief bout of experimentation, it's discovered that the game's formula hinges on creating paths of light which act as safe zones from the numerous (and instantly lethal) creepy-crawlies that skitter in the shadows. The goal in every room is to reach the exit, and ultimately, to rescue a girlfriend that's hidden away at the far end of the building.

Employing the fresh concept of "light as safety," protagonist Jake will be spending most of his time turning on lamps, TVs, and other appliances that cast a glow to push back the inky darkness. In addition, objects found in each room (like slingshot pellets or cherry bombs) are worth more than gold. With careful aim, these items can be used to knock out windows, providing glowing alleyways of safety the length of each room. Naturally, Lit's challenge comes from making the best of what limited resources are available, and creatively mapping out a route that can keep the player bathed in photons from start to finish.

With a fresh concept and some superbly creepy art design that supports the sinister motif, Lit won me over almost immediately. However, as the game went on, there were a number of rough spots that significantly detracted from the experience overall. 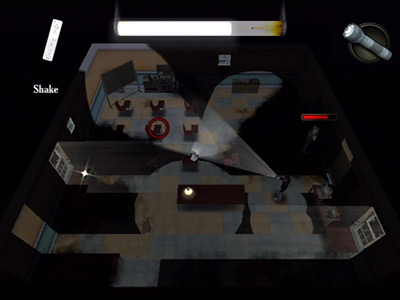 For example, if Jake steps into a shadow for even a fraction of a second, claws reach out from the floor and pull him to his doom. Fair enough, but there are more than a few times that Jake is required to either walk straight through a thin strip of shadow, or take a half-step into a shaded area in order to reach a vital lamp or computer. It's never clear how far is safe, and due to the game's overhead camera, it's quite difficult to gauge distances when Jake is in the distant end of any area. I felt like this was a definite fudging of the game's otherwise clear rules, and felt that these instances should have been removed. If nothing else, a little more clarity and room for error to compensate would've been appreciated.

Another trouble spot, the Wiimote's "A" button handles all of the functions in the game contextually, with the appropriate action being taken when Jake is near something that can be used. The problem is that it's far too easy to accidentally activate the wrong item, and in most of Lit's rooms, death is only a push of a button away.

This situation is made even worse when Jake encounters rooms that require fast action. There aren't many of them, but when speed is of the essence, the control system isn't quite up to the task. It's already a minor challenge navigating around the obstacles in each room without accidentally stepping into blackness, and making sure that Jake is close enough to perform the desired action (while avoiding unwanted ones) is almost too much. Anyone taking on Lit's challenge should be prepared for a substantial amount of repetition to get through these segments, the boss encounters near the end of the game being especially tooth-gnashing.

Although I ended the game more frustrated and annoyed than I will usually tolerate, I will say that I did enjoy Lit for not being afraid to try something different, and succeeding at it for the most part—its theme and subject matter certainly make it stand out compared to most of WiiWare's other offerings. It's recommended, but with a little more polish it could have been fantastic. As it stands, it's an interesting, yet slightly flawed effort. Rating: 6.5 out of 10.

Disclosures: This game was obtained via paid download and reviewed on the Wii. Approximately four hours of play were devoted to the single-player mode and it was finished one time. There are no multiplayer modes.

Parents: According to the ESRB, this game contains violence. The tone and setting of the game are surprisingly dark compared to what's usually found on the Wii, but there is nothing graphic or explicit about the game. With no real weapons (unless you count slingshots and cherry bombs) and precious few "fights" from start to finish, this one is safe for the majority of players, although the difficulty will naturally skew it towards older kids.

Deaf & Hard of Hearing Gamers: You will likely miss out on the phones that ring in some rooms. The number of phones answered is counted towards which ending the player receives, and without being able to hear them, it's tough to know that they're ringing. When a phone is answered, the voice comes out through the Wiimote speaker, and is not subtitled on-screen. Without answering these phones, the player is guaranteed to receive the "bad" ending, but aside from this issue, there are no audio cues needed during gameplay.

amazon now has everything, anyone know how to buy in amazon in cheap prize?