So, I find myself playing another XBLA game that's currently under embargo. However, this is certainly a title that deserves much praise from what I've seen of it so far…

I've put in a request asking to specify whether I can talk about it (or not) as long as no official review is published, but in the meantime, let me just say that [redacted!] is pretty friggin’ SWEET.

… seriously, nothing but love for it.

My friend @PeterSkerritt is an extremely sharp guy and he has a lot of really on-target things to say about the gaming industry. One of his recent blogs talk about some of the mistakes that Capcom has made recently, and even though I'm someone who has a lot of love for the house of Mega Man, I certainly think Peter is preaching the gospel here.

Finally, I can't quite remember what brought the subject up again, but I often think that it's a shame that a lot of older games don't get the appreciation they deserve. Or, more specifically, I think a lot of players lack an appreciation of history. [disclaimer] It's a bit of a complicated problem and I'm not sure that I am awake enough to do the entire subject justice at this particular moment [end disclaimer] but it seems to me that there are two main issues here:

The first is that many players trying older games for the first time lack historical context, and the second is that games, moreso than any other medium, suffer from the rapid pace of improving technology. 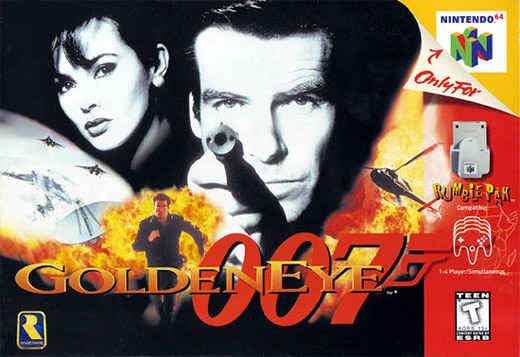 As an example of the historical context problem, put GoldenEye 007 (N64) in front someone who's never played it before, and I guarantee that their reaction will be less than positive. However, people who are old enough to have played it when it first hit often speak of all-night multiplayer binges in reverent tones. The difference there is that people who have the proper context know what gaming was like at the time, and what it was like before GoldenEye made the strides in multiplayer that it did.

I'm not saying that current players must play the game and love it the way that older folks do, but I do think it's important to remember that particular games became milestones for a reason, and forgetting that means forgetting how we got to where we are today.

The second issue, improving technology, is a fairly obvious one.

Anyone can go to the library and pick up a book from ten, twenty, fifty, or even a hundred years ago and appreciate what the author had to say. Oh sure, some of the language may be different, but the barriers to benefiting from such a work aren't really that high. The same goes for films. Anyone can track down a movie from the last few decades and watch it, and although special effects and production values have risen quite a bit, the quality of the performances and the message of the writing will still be able to be enjoyed. That enduring quality does not seem to hold as true for games.

I'm not trying to say that current gamers are shallow, but it's rare when I meet someone who’s interested and motivated enough about educating themselves on the medium to put up with the graphical quality and technical issues of a game from last generation, let alone two or three generations ago. That is, of course, completely putting aside the issue of the logistical difficulty of finding the games and hardware to play in the first place…

(For more on this, my friend and former E3 roomie @KyleOrl wrote a piece on his own journey of discovery.)

I think there’s a lot of value in seeing where games came from and what they used to be like. Not only does it give a greater appreciation for the quality of games being made today, but it also shows which "innovations" are actually iterations on ideas previously put forth and provides a lot of insight into current design. I'm not even forty years old, but when reading certain reviews or talking with gamers younger than myself, it seems quite clear that many of them have large gaps of knowledge that, if filled, would increase their appreciation of the hobby, not to mention informing discussions and examinations of same.

Well, I've certainly got a few ideas of my own, BUT I'm interested to hear the thoughts of my blog’s brain trust. So… if you've got some ideas, what say ye?

I definitely agree that HD remakes of classic console titles are completely worth it. And in fact I agree that re-releases and special editions in general, optimized to run smoothly on the current generation of tech, are a great idea. I missed Chrono Cross the first time because I didn’t have the right tech; I massively enjoyed playing it through on the Nintendo DS a couple of years ago. I have friends who never got to play The Secret of Monkey Island way back when who have since enjoyed it enormously on their phones or iPads. I owned a huge… Read more »

[quote=Ilya Zarembsky]The difference in your Golden Eye example I think is that the people who played the game back in the day are wearing nostalgia goggles. You don’t need a sense of gaming history to understand that Golden Eye (or Game X etc) is not a good game. Like you say, all you gotta do is sit down and play it for twenty minutes.[/quote] I think it’s a little more complicated then that. Do B&W movies suck because they don’t have color? Are handwritten bibles inferior to ones made on a printing press? It just takes a different sensibility to… Read more »

[quote=Ilya Zarembsky]…people who played the game back in the day are wearing nostalgia goggles….[/quote] Yeah, some do. It set FPS standards, together with HL and NOLF, which are not always matched by current games. AI standards were raised by Far Cry, Crysis and FEAR. But as soon as they get excelled by newer games they are really just what they are, milestones, but not ultimately the first recommendation i would then give. I loved Goldeneye at its release. It kicked the asses of Half Life and Unreal. But it’s a game i would not recommend today without some disclaimers. Old… Read more »

Technology – I don’t fully buy the technology argument, for a couple of reasons: First, while I agree that games do depend on technology, I am not convinced that they are that much different than books and movies in that regard. Citizen Kane was a technological marvel at the time, but many people still find it boring today, and many people won’t even bother watching old films. And if we look at the earliest films, we see that the makers were feeling their way through the dark. Historical context is equally important for other media as well. Look at Shakespeare… Read more »

[quote=Odofakyodo] Why hold back? Hardcore gamers are a shallow bunch in general. They buy into hype and uber graphics, which is why you’ll see the sales of super hyped hardcore games massively spike in the first month or two and then taper off to nothing. Casual gamers do other things with their lives, so they are more likely to be discerning in their tastes. Hardcore gamers generally don’t lead interesting lives as they are playing games all day and not doing interesting things. The reason they don’t care about history is because they are not interested in it, and they… Read more »

[quote=Ilya Zarembsky]You don’t need a sense of gaming history to understand that Golden Eye (or Game X etc) is not a good game.[/quote] I don’t think that Goldeneye is a bad game, far from it. Just because it doesn’t follow modern conventions doesn’t make it bad. In some ways its actually better, for example the death animation in Goldeneye are a lot more fun then anything you see in modern shooters. They are over the top and theatricality for sure, but they have variety and impact often missing in modern days shooter where enemies just fall to the ground or… Read more »

I’m not really responding to the question you pose at the end of your blog, but rather, you brought to mind something I am quite adamant about: old 8 and 16-bit games (with graphics built from pixels) age volumes better than early polygon/3D games, like much of what was on the PS One. Go play Metal Gear Solid…it’s fairly hard to look at, which is disappointing. Then go play Super Mario Bros, or Final Fantasy VI, or The Legend of Zelda…these games look great and play great. I’m not saying they will forever stand the test of time, but they… Read more »

The difference in your Golden Eye example I think is that the people who played the game back in the day are wearing nostalgia goggles. You don’t need a sense of gaming history to understand that Golden Eye (or Game X etc) is not a good game. Like you say, all you gotta do is sit down and play it for twenty minutes.

It’s fun to be the expert and lament forgotten innovators and discourse on genre roots to young whippersnappers etc, but I don’t think you really need to know anything about the past to judge a new game.