Drawing a Line is About as Fun as it Sounds 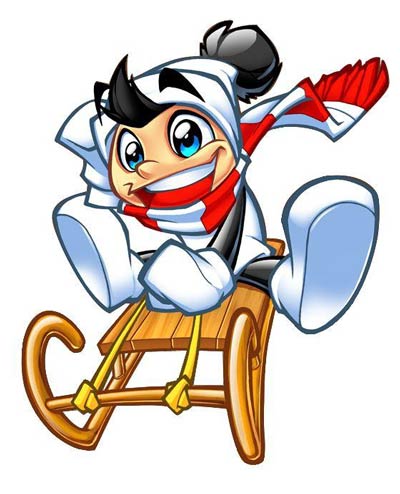 HIGH The aesthetic and core concept are pretty adorable.

LOW The difficulty of later levels is ridiculous.

WTF In a game all about drawing lines, why is it so hard to connect or erase them?

How much entertainment can you get out of riding down a hill on a sled? If Line Rider 2: Unbound is the ruler you're measuring by, the answer is: not much.

I had never heard of Line Rider before seeing the retail copy arrive at the GameCritics offices (i.e., my mailbox) but after a bit of research, it turns out that the inspiration for Unbound is a Flash-based program available over the Internet. More an interactive toy than a traditional "game," the developers have tweaked the formula in order to make it a bit more appealing to handheld gamer sensibilities and turned it into something of a puzzler.

Basically, the idea of the story mode is that your character is on a sled heading downhill. There are gaps in the surface he's riding on, and it's up to the player to fill in the holes to make sure that the sled gets where it's going. The challenge comes in via the player's discretion in choosing between three types of line: regular, speed-up, and slow-down. Depending on the trajectory and on the type of line selected, the game implements a basic physics engine to determine whether or not the player's construction will lead to a checkered flag or a few broken bones.

Unbound started off well enough with an easy-to-grasp premise and some above-average music, but the appeal soon dissipated thanks to a lack of depth in the concept and some technical problems. I do count myself a fan of puzzle games (especially weird ones), but I've got to say that my patience ran out in a hurry here.

Since the only thing the player is asked to do is draw lines, unavoidable feelings of monotony, repetition, and frustration soon set in once the levels increase in difficulty. At one point, I found myself drawing the same line over and over, repeatedly trying to modify its curves and its length by a few pixels to find the proper path. Every time I thought I had it, my sled rider would either biff the landing or overshoot the target, prompting me to go back and tweak what I had drawn, or simply erase everything and start over. After 15 or so minutes of drawing the line I realized that I had spent 15 minutes drawing a line, and the little remaining charm the game had simply evaporated. 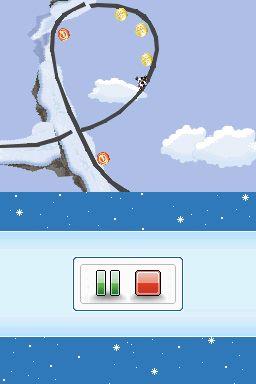 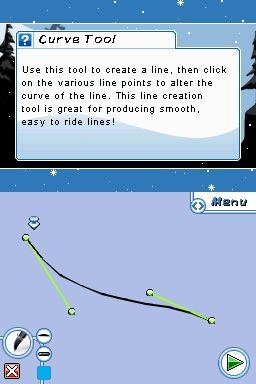 In addition to the maddening challenge of the later levels, it's a little ridiculous that a formula this simple isn't nailed down tight, technically speaking. For example, the interface is cumbersome and isn't at all optimized to take full advantage of the DS. The menu feels very clunky and muddled, and in a game revolving around drawing lines, erasing them should be simplicity itself, not the tedious exercise it becomes almost immediately.

Especially damning is the fact that the physics don't always work properly. My sled rider would sometimes fall through invisible gaps where two lines met, or pass through things that should be solid. Playing something as straightforward and minimalist as this should be as smooth as butter, and it's just not.

Acknowledging its Flash roots, Line Rider 2: Unbound includes a free mode where the player can create tracks at will for the sheer joy of doing so, and a "puzzle sharing" mode where levels similar to the story mode's can be created and uploaded/downloaded via Wi-Fi. These are nice additions, but will hold little appeal for anyone not taken with the concept and prepared to put up with its eccentricities— besides, if simply creating some levels is what's desired, the original Line Rider is still available online for free, negating any reason to purchase this game in the first place.

Line Rider 2: Unbound is a cute idea, but in my opinion it doesn't have the chops or the longevity to become a successful handheld title. For those curious about what sort of gameplay can be had with a sled and some imagination, my recommendation is to download the original and save yourself the headache of this unimpressive cartridge.  Rating: 3.5 out of 10

Disclosures: This game was obtained via the publisher and reviewed on the Nintendo DS. Approximately 3 hours of play were devoted to the single-player mode, and the game was not completed. Less than one hour was spent in free/level-sharing modes.

Parents: According to the ESRB this game contains comic mischief, but it's definitely of the harmless Roadrunner/Wile E. Coyote type. After each level, there's a brief cut-scene  showing cartoon antics, but they're hardly anything to be concerned about. Otherwise, the game is absolutely benign.

Deaf & Hard of Hearing Gamers: There are no auditory cues during gameplay, and there's barely even a story. Everything is presented on-screen, so have no fear.

Line Rider was a great flash-based distraction on the web. If you played the flash game–if you can call it a game–it takes no thought to do what is asked of you: draw a line for the character to ride on. It looks like they were trying to force a game here. That’s what I think when I read about difficult gameplay and strict puzzle-based objectives. The Line Rider I played wasn’t about that. Also when you look at the platforms it is on (Wii, Nintendo DS and PC), control and interface should never be much of an issue. Maybe… Read more »