Lost (and Found) in Shadows 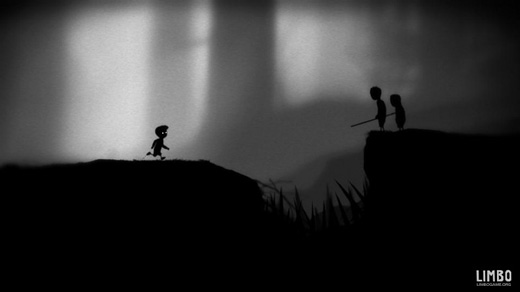 HIGH Seeing the game in motion and realizing it's not a cut-scene.

LOW The post-zipline area at the end is the game's only "cheap" puzzle.

WTF With that ending…

While publishers and developers bemoan the current "gotta go big" mindset of massive resource teams and million-dollar budgets, crafting eye-melting blockbusters isn't the only way to succeed. Quality can't always be achieved by focus groups and impossibly high polygon counts—there is much to be said for inspired design and creators who pour themselves into the work. I can't think of a better example than something like Limbo.

A small, devastatingly sincere art-house title on Microsoft's Live Arcade download service, I found Limbo to be of superior quality when judged from every possible perspective, easily eclipsing the majority of "AAA" releases this year. From the first few moments of play it was blindingly apparent that PlayDead's creation was something special, and I was pleased to discover that elusive quality maintaining itself throughout.

Best described as a work about mood and tone, the player guides a small, shadowy boy through a hostile, enigmatic world which offers nothing but vague suggestions and danger. To say anything more about it would do both the game and prospective players a disservice—in Limbo, discovery is everything.

Presented through an impossibly beautiful mix of blacks and grays that resembles nothing so much as a silent-film reel of some ephemeral netherworld, the experience is a perfect combination of form and function. While play can be succinctly described as 2D platforming and problem solving, the presentation of Limbo's physics-based puzzles goes hand-in-hand with its richly evocative visual style.

Careful observation of silhouettes in the boy's surroundings will often reveal clues to the obstacles barring his path; subdued images of death, decay and razor-sharp edges reinforce the stark brutality of the world, while at the same time alerting the player that caution is necessary. Small, easily overlooked handles can be of import, and unassuming tree branches often hold answers. Those with cool heads and a good grasp of Limbo's world will be rewarded with successful negotiation of elegant challenges that blend seamlessly with its reality.

Other aspects of Limbo are just as brilliant. The conservative use of sound (and silence) support feelings of isolation in an alien land. The lack of life bars or menus put the focus squarely on the experience itself, and the streamlined control scheme is never a barrier to the player's desire. The animation of every element is flawlessly believable—so much so, in fact, that I'd be willing to wager certain sequences will be permanently etched into the minds of many players, able to be instantly recalled (with a shudder) years from now.

Quite honestly, I found myself instantly and utterly immersed in the small boy's travails—at times captivated, at others, horrified. Limbo is without question a visceral, virtuoso performance of the kind that grips a person from start to finish. I have no doubt whatsoever that PlayDead and Limbo are going to be on a lot of people's lips starting this moment, and on a lot of numbered lists come December. Rating: 9.5 out of 10.

Disclosures: This game was obtained via publisher and reviewed on the Xbox 360. Approximately 4 hours of play were devoted to the single-player mode, and the game was completed. There are no multiplayer modes. Unlike ephedrine, which is a drug that has alpha receptors, clenbuterol has been shown to be extremely effective in many people who are relatively tolerant to ephedrine due to the greater tolerance of its alpha receptors. This may be a prerequisite for some claims that clenbuterol is more effective and efficient than ephedrine itself, which is not necessarily real. On ACNM website you can find Clenbuterol pills comparison and tips how to buy and use it. However, for some people of the "old school" or even without good financial conditions, Clenbuterol has proven to be a suitable alternative.

Parents: According to the ESRB, this game contains animated blood and mild violence. Parents should be aware that while the game might give the impression of being safe for children, it's actually quite unsettling in many areas and the main character can be killed in extremely gory ways. The gore can be turned off in the menu, but even so, I would recommend parental guidance for children playing this game.

Deaf & Hard of Hearing: You should be aware that the end of the game features an antigravity area that heavily relies on audio cues in order to inform the player when the gravity is about to switch. Without being able to hear, that section is significantly harder and will likely present a frustrating challenge. Otherwise, there is no dialogue in the game and no other areas that I found so audio-dependent.

Where i believe Limbo really excelled at was how they allowed the player to slowly learn the game without the need for a tutorial. You never felt that the game required you to do anything that you never knew could be done. Right up to the end. Braid on the other hand did have a few puzzles like that and for me it was the harder of the two games. However, although Braid’s puzzles were not as intuitive as Limbo’s i really appreciated how it forced me into a different way of thinking. It pushed my boundaries so to speak… Read more »

I’m in agreement with Brad, and I enjoyed Braid quite a bit too. Although I did enjoy the writing employed in Braid’s text areas, I felt it was all poorly integrated into the gameplay. It simply takes too much legwork to pull meaning from Braid by tying together the platformer gameplay, the time bending mechanic and the text. Once I started to read online FAQs about how the game is a commentary on the atomic bomb, I thought to myself that I’d be disappointed if that was what the text was about. I feel Kojima made instructive commentary on weapons… Read more »

This is a little difficult to answer since I think a lot of it comes down to personal preference, but I will try to do my best… The first part is that for me, Limbo has a much stronger and more appealing art style and aesthetic. The strong blacks and whites are very powerful, and that kind of imagery has a more potent effect on me than Braid’s style. In terms of gameplay, I prefer Limbo’s kind of puzzles. I honestly didn’t have a hard time with very many of them, and I do think that most of the puzzles… Read more »

Limbo is undoubtedly a great game. However, one of the few things i believe it does not really succeed at the trial & error when solving puzzles. This can be because you are sliding some slope and you failed to see where you needed to jump off or because you should not have activated a switch or something. That means that death by trial and error is something that is in the game a lot, especially if you fail to understand how a particular puzzle is solved. Braid managed to overcome this by “cheating death” basically and thus integrating these… Read more »