All dressed up with no interesting place to go 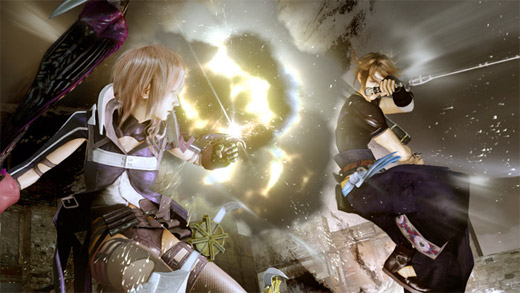 HIGH The combat system and outfit switching are mostly great.

LOW Fetchquests and item hunts make up the bulk of playtime.

WTF Who approved all these tedious quests?

Although I didn't play the previous two games in the Final Fantasy XIII arc, I was quite impressed with the demo for the third, Lightning Returns

. Despite not being invested in the series, I decided to give it a chance. If nothing else, it seemed a welcome return of something approximating the supersartorial dressphere system from FF X-2, and I'm all for interesting choices shaking up the norm in JRPGs. Unfortunately, this latest from Square-Enix stumbles hard where it counts, and I'm left with the impression that the demo was the best part of the experience.

Coming to the story of Lightning and her supporting cast after missing out on two entire games' worth of developments, I'm inclined to give the narrative in Returns some slack. However, what is on display is more of the same quasi-nonsensical stuff that passes for plot in many JRPGs, and I felt no attachment to any of the stars, though the core premise is actually quite interesting —  the world will end in a handful of days, and Lightning must save as many souls as she can in order to populate the new world after God (named Bhunivelze, and no, that's not a typo) recreates it.

In order to actually save the needed souls, Lightning must help troubled people. When their issues are solved, she collects their soul. Those she accumulates are then used to delay the doomsday clock, and this buys her more time to collect even more souls. However, no matter what she does, the end comes on the thirteenth day, so time is of the essence.

Taking all this into account, Lightning Returns reminds me a bit of the divisive Zelda title Majora's Mask. A similar awareness of being on borrowed time gives the proceedings a sense of urgency, certain parts of the world are open or closed according to the day/night cycle, important people come and go on schedules, and there are a wealth of sidequests to complete. Of course it's not exactly the same, but the flavor is there and it results in a very interesting interpretation of Final Fantasy. However, having a great concept and actually realizing its potential are two completely different things, as this game so amply proves.

First off, the premise seems a bit out-of-step with the world. It's unclear how common the knowledge of the coming end is, but everybody seems awfully calm. I'd at least expect some rioting in the streets or bizarrely nihilistic goings-on. Instead, it all seems like an average, sedate JRPG world.

Further, I think the writers were perhaps a bit too eager to insert Christianity themes where they don't fit. Lightning is referred to as ‘The Savior' dozens of times, and her actions echo the Rapture.  However, the ‘souls' in the game don't make sense – after all, if a person loses their soul, aren't they dead? But here in Returns, people give up their ghosts and just keep on about their business. It seems more accurate to say that Lightning is lifting their burdens or easing their worries rather than saving their souls. Something was lost in translation, perhaps?

As for the combat, I enjoyed it for the most part, and the semi-real-time battles are flashy and impressive. In these encounters, Lightning can switch between three customizable outfits equipped with various powers and statistics. Change into a wizard suit to cast lightning, and when that energy is depleted, switch to a warrior suit to brandish a blade while the wizard replenishes. Tactics not working? Change into a white magic ensemble and heal up.

Jumping between outfits is fast and feels rich with options for those who like to tinker with equipment for optimal setups, but the problem is that when on the battlefield, Lightning doesn't have any way to move quickly. It's not a noticeable problem in the beginning when she's facing off against one enemy at a time, but it soon becomes apparent in crowds of enemies, or against larger foes where it's important to dodge. Attacking with a melee weapon will rocket her forward and casting a spell will make her take a quick hop back, but it's not the same as being able to freely move at will, and it's a strange omission.

In terms of the larger game design, it seems crafted in direct response to criticisms of the original Final Fantasy XIII. Although I didn't play that game, it was notorious for keeping players on rails and not giving them any sidequests or other activities to participate in. Lightning Returns, in comparison, is nothing but sidequests.

Upon arriving in the first city, Lightning is immediately faced with a murder mystery to solve, which is done by blindly walking around the city and searching for clues. There are no quest markers or location icons, so simply wandering around looking for things is the order of the day, and it's quite tedious if something is missed.

While on this main quest, Lightning will come across a slew of people who have their own small-scale problems, and she can take those on in order to collect souls. However, they feel like pointless filler and tedious distractions, and very few are interesting on any level. Find a doll for a girl, participate in a foot race with a boy, deliver this box, promise to find someone's long-lost lover… None of these tie into the main narrative, and the characters are so thin that there's no motivation to help them.

Unfortunately, helping them is key not only because collecting their souls extends the game, but because earning experience points is done only by finishing these quests. That's right, no EXP is awarded from battles, so doing the busywork is required to level Lightning up no matter how pointless it is. Worse, Lighting has no way of fast-traveling across the areas where these people are. With a number of unfinished quests in my log, I had to crisscross back-and-forth across the city a number of times. The areas aren't huge, but they're big enough to feel irritated at how often I had to run to the far side of each map.

Boiling it all down, Lighting Returns

is a flashy combat system lacking some basic components that's wrapped up in soporific item hunts and fetchquests that don't feel worthy of the time that's required to do them. I'm all in favor of having more female protagonists and innovation in combat systems (especially if they involve using style as a weapon!) but the interesting apocalyptic premise is wasted on a tiresome project that thinks offering a thousand boring things to do is the same as creating a worthwhile adventure. Rating: 5 out of 10


Disclosures: This game was obtained via publisher and reviewed on the Xbox 360. Approximately 14 hours of play were devoted to the single-player mode, and the game was not completed. There are no multiplayer modes.

Parents: According to the ESRB, this game contains: Blood, Mild Language, Suggestive Themes, Use of Alcohol, and Violence. Although these warnings seem to run the entire gamut of no-nos, I didn't find anything to be particularly noteworthy or objectionable. It's pretty standard teen-appropriate stuff, and the violence is mostly Lightning whacking monsters with a sword or casting magic.

Deaf & Hard of Hearing Gamers: There shouldn't be any problems here. All dialogue is subtitled, and I didn't notice any significant auditory cues during my playtime. The combat is semi-real time, but all of the important factors are displayed on-screen and sound doesn't play a role.