Too Small to Succeed 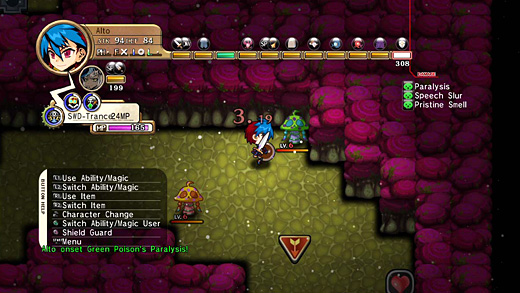 LOW Why in the world is this not Vita compatible?

WTF Even the water is bean sprouts.

Of all the things that a reviewer can find wrong with a game, it's not too often that being on the wrong platform is a title's biggest problem. However, that's exactly the case with Legasista.

A small-scale quasi-Roguelike title that sends players into randomized dungeons and asks them to use their wits to succeed, Legasista isn't bad at all. It's a little unusual in that it features a good amount of Japanese role-playing game-flavored story on top of alarmingly deep item customization guaranteed to mystify even the most seasoned player, but it meets the requirements for its genre. It's even got some twists all its own to recommend it.

For example, although the game runs in real time (instead of turn-based like most Rogues) it handles well and the ability to switch between different characters on the fly keeps the otherwise-simple dungeon crawling fresh. I also liked the way taking damage deactivated certain pieces of equipment, and its large focus on poisons that can grant both positive and negative status effects is unique. The art is cute, it's got charm, and there aren't a lot of titles out there like it. Getting another one of this sort is always welcome.

On the other hand, it's a small project crafted with a narrow focus. Putting it on PlayStation Network (PSN) instead of the Vita does Legasista a disservice.

As I said, the game doesn't do anything wrong per se, it's just that the low-end production values and repetitive formula (common for the genre) feel woefully overshadowed by the PSN competition. I don't mean this as a negative, but it feels like it could easily run on the iPhone or PlayStation Portable. I enjoyed it for what it was, but a title that would be perfect on the go isn't usually substantial enough when at home on a big screen and a console with horses under the hood.

Speaking frankly, there are certain levels of expectation associated with any given piece of hardware, and games which don't live up to that standard will inevitably suffer. Legasista is a solid title that knows what it wants to be and hits that target… It's just that the bullseye isn't hanging in the right place. Rating: 6.0 out of 10.


Disclosures: This game was obtained via publisher and reviewed on the PS3. Approximately 8 hours of play were devoted to the single-player mode, and the game was not completed at the time of review. There are no multiplayer modes.

Parents: According to the ESRB, this game contains partial nudity, fantasy violence. With such simple gameplay and low-and production values, there's not much to be alarmed about here. The violence consists of very simple ‘stab' animations against monsters and animals, with no gore whatsoever. The partial nudity comes from the massively-endowed female witch character. Although she is technically clothed, her costume is in possibly in low-cut. It's hard not to stare, but other than that, the characters are typical JRPG fare.

Deaf & Hard of Hearing Gamers: You won't encounter any trouble here. The voices are in Japanese, so all dialogue for players outside of that territory is presented through text. There are no significant audio cues during gameplay.