Phoenix Wright meets Professor Layton. And that's all I'm going to say, apart from directing you to watch the announcement video and asking you to pray to the stars above that this game gets a domestic release.

So if you read this blog regularly, you may remember that I commented about the Vanquish demo a while ago. Frankly, I wasn't too high on it at the time. I thought it was sporting some great graphics, but the gameplay just wasn't clicking.

I got my hands on a full version and decided to start fresh. Strangely enough, my impressions now are almost completely different than they were back then. The game is totally incredible, and I've been playing it basically non-stop since I started.

I'm going to do a full review of the game soon, but if you (like me) weren't really impressed with the demo or you got scared off by the claims that the game is only three hours long, let me assure you—in my view, Vanquish is easily one of the best games released this year.

As far as the length issue goes, I haven't completed the game yet but I've already been playing closer to six or seven hours. Apparently the game counts play time in some weird, funky way so when people post pictures of their "game over" screen, the final run-time tally is not correct. At least, it's not truly reflective of the real-time hours spent by the player. I haven't been keeping a stopwatch by my side, but I'm absolutely sure that the game runs longer than three or four hours.

As for the rest, you have to read my review for the full details… BUT, I will say that the graphics are phenomenal, controls are tight, game design is brilliant, the pace of action remains high from the start (and rarely ever lets up) and there are so many OMGWTFBBQ moments and unbelievable setpieces that Vanquish puts the competition to shame. Crushes the hell out of it, really.

In terms of jaw-dropping Sci-Fi thrill rides, they really don't come better than this. I haven't completed the game although I'm quite close, but I have no reservations giving Vanquish my highest possible recommendation. 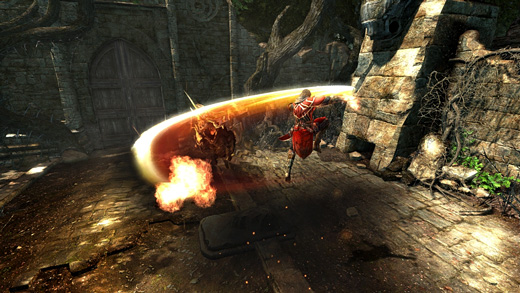 On the complete opposite end of the spectrum, we have Castlevania: Lords of Shadow.

I haven't played very much of the game, but then again, I have to be completely honest in saying that I don't feel particularly motivated or interested to come back to it. However, rather than getting into a discussion of why Castlevania has failed to hold my attention, the real reason I bring it up is that I've had several people tell me things like "it gets better later" , "it's a slow burn", or "things really heat up past the halfway point."

I can't say whether this is true or not (although I will say that I doubt it) but as someone who has spent so many years playing so many games and who now has a full-time job, a family, and other obligations, asking players to invest in this kind of non-starter title has to stop. Videogaming is the only media where it's deemed acceptable to ask a consumer to sit through several hours (and sometimes more) before the developers get their ducks in a row and finally arrive at "the good part", and this kind of design simply does not fly anywhere else.

As an aspiring author, I've received tons of rejection letters that were based on brief sections of my writing. It's seldom an agent or an editor reads more than three chapters, and the norm is something closer to one chapter, or even a one-page synopsis. Regardless of how good the middle or end of the book is, it's the kiss of death to have a slow, non-starting beginning. In fact, I recently judged a writing competition, and it was a bit of an epiphany to be on the other side of the equation. After receiving a stack of submissions, I noticed that if the author didn't grab me within the first few pages, it was extremely unlikely that the rest of the submission would be worth reading. I'm sure that's not always the case, but that's essentially what it boils down to.

Look at television or films. I don't know about you, but when I start watching a brand-new TV show, if the first episode is bad, I'm pretty likely to stop watching and move onto something else. Will I be missing out on a series that really takes off two, four, or ten episodes later? Perhaps, but it's asking a lot for someone to devote time to something that may or may not improve. Same goes for movies. While I'll usually sit through almost anything if I've paid for a ticket in a theater, I don't force myself to sit through slow beginnings at home. If the movie can't give me a reason to keep watching within the first fifteen minutes or so, it's done.

Since games are a time-intensive pastime and require a much more active role from the player than simply sitting on the couch or turning a page, it makes no sense to me for a developer to hide "good stuff" hours into the experience. I'm not saying that games need to lay all their cards on the table up front, but they do need to be exciting, intriguing, or interesting enough to convince me to devote my precious free time to them.

If the really fun powers of a character don't come into play until 3/4ths of the way through an adventure, that's a problem. If a story languishes with dull characters and irrelevant plot lines until a player gets ten chapters in, that's a problem. If a developer is not able to express the core value of their project within the first HOUR, that's a deadly serious problem.

I like stories with twists and turns, I can appreciate starting with simple mechanics and building them in complexity as an adventure goes along, and I can certainly have patience for things that might take time to unfold, but there has to be some hook; some display of brilliance and promise that gives me reason to push on. I'm no longer willing to sit through drab "filler" levels, and stories that roam over hill and dale before sharing a few juicy bits with the player.

Don't get me wrong—I'm not saying that games need to be short as a rule. If a developer feels as though they need a hundred hours to deliver the complete experience they're crafting, I'm absolutely fine with that as long as it's not 90 hours of garbage and a really "killer twist" at the end. However, if you're crafting a game that has six hours of quality content, don't you dare ask me to give you fifteen or twenty hours in order to see it.

No more slow starts. No more making me get halfway through before things pick up. No more pointless crap and asking me to get through tedium in the hopes of finding value later on.

It's called editing and focus, people. Learn it.

You know, that’s actually a really good point and one which I didn’t realize until you said something. I’ll have to think on this for a little bit.

Vanquish is a later Mikami game so it doesn’t surprise me it’s as good as you say. I’ll probably finally get around to checking it out in about a week or two. Actually, I seem to recall from that God Hand podcast way back that you had a similar reaction, that you were initially dismissive but it grew on you after a revisit. Maybe not as much, you sound like you enjoyed this much more. But I know you say those kind of changes are rare with you, so I just find it interesting that you have two games from… Read more »

While I agree with you in theory (and said as much on Twitter), I really didn’t have a problem with the first 3 chapters of Lords of Shadow (which are, unquestionably, the weakest part of the game). Sure, it was slow-moving and featured a lot of roaming around, but that gave me the impression that I was on an epic and atmospheric journey spanning a vast countryside rather than the usual quick stint in Dracula’s Castle v. 50.00004. The slow pacing of this part of the game to me balances out the much quicker middle section of the game. This… Read more »