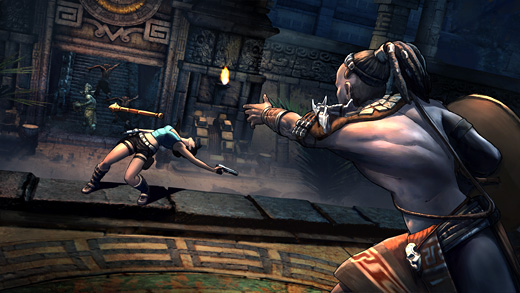 In the fourteen (!!!) years since her debut, video game icon Lara Croft has conquered many things. Easily besting primitive traps set by native peoples, mythical monsters guarding sacred relics, and hordes of rival treasure hunters bent on violence, she's proved quite capable of any task set before her. Now she can add one more thing to her list of conquests: the isometric perspective.

Lara Croft and the Guardian of Light is a new download-only title marking a fresh beginning for everyone's favorite British archaeologist. While it shares many thematic elements with Lara's previous games, it's also a big departure, and one that many were skeptical of. However, my hat is off to Crystal Dynamics. Not only did they boldly set off in a new direction with one of the most well-known properties in gaming, they've created an outstanding download title that's nearly perfect in form, size, and function.

Guardian of Light starts off (as usual) with Lara in pursuit of a long-lost artifact. Before reaching her prize, she's beaten to the object by a group of mercenaries who unwittingly unleash an evil force held within. At the same time, a nearby statue of a tall warrior named Totec is awakened. With a common cause, Lara and Totec quickly join forces to return the evil to its prison before the next sunrise.

First things first, the fact of the matter is that Guardian of Light is best as a two-player affair. When the game launches on August 18th, the only co-op option will be same-system local. Online multiplayer will come later via a free update available on or around September 28. While it's absolutely possible to play through the game alone, it definitely loses something without a partner. It's unfortunate that the online aspect was not ready for launch since a second person is what makes the experience shine, but for players who have access to a nearby friend, sibling, or partner, I can't recommend it enough.

From the very first moments of play, the game just sings. Everything about it feels smooth and polished, and it's just dripping with attractive production values. However, it's not the presentation that won me over; it was the tightly-tuned gameplay with its extremely smart and surprisingly deep focus on true co-op. 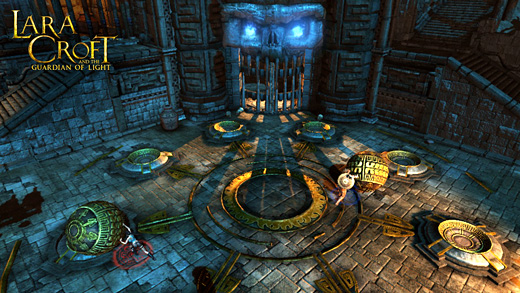 While navigating the various tombs and ruins that make up the adventure, nearly every puzzle is designed in such a way so that each player must take an active part in solving it. The balance of responsibility is so ingrained into the game from start to finish, that I honestly can't think of another co-op game that is as intricate and tightly woven.

For example, in one room Lara might have to grapple to a faraway attach point so that Totec can nimbly walk the rope to a higher level. In another room, Totec might have to throw a series of spears into a wall in order to create an impromptu bridge for Lara to scamper across. When scouring temples for pickups and hidden items, Totec's impenetrable shield not only protects Lara from poison arrows and fireballs, it also serves as a stepping stone to boost her upwards.

There are numerous other examples where teamwork takes advantage of each character's abilities, and often requires them to do so in real time. It is the extremely rare occasion when one player is able to sit idle while the other "does the work", and in my opinion, the co-op in Guardian of Light is a complete home run.

Not content to stop there, Crystal Dynamics put quite a bit of effort into the rest of the project.

The adventure was satisfactorily lengthy (without being too long) and there's quite a bit of variety in the challenges with very little repetition. There are also a large number of "bonus" rooms where players can earn items by figuring out particularly challenging puzzles, and players also gain access to a large number of weapons, artifacts and relics that alter attributes.

Even better, in addition to the expected Achievements, there are a large number of challenges and special tasks that players can take on. While they're certainly skippable, they add an extra layer to the game and provide plenty of replay once the villain's been vanquished. Toss in a few boss battles and some high-energy escape sequences, and the result is an extremely strong title that has all its bases covered.

At the risk of gushing, I really can't say enough good things about Lara Croft and the Guardian of Light. Smart, attractive and balanced, it scores a hit in every aspect and sports thorough thinking throughout. I really can't see much room for improvement, save for the fact that the online co-op wasn't ready at launch. While many players won't initially be able to experience the game the way it was intended, once the online patch becomes available, I would recommend it without reservation to anyone who's got at least one game-playing friend. Rating: 9.0 out of 10.

Parents: According to the ESRB, this game contains blood and animated violence. While there is certainly a plentiful amount of gunplay, most of the targets are fictional monsters. I don't think I would want a younger child playing this game because of all the shooting, but I'd say it was fairly harmless for older kids and teens. Shooting a grenade launcher at a giant ogre doesn't really have much bearing on the real world. There was no sexual content, and no instances of questionable language.

Deaf & Hard of Hearing Gamers: You get shortchanged here. Even with the subtitles turned on, I noticed plenty of instances where spoken dialogue during levels was not reflected on screen. This omission is disappointing and could have easily been remedied. I hope that the developers will include it in a future patch. Otherwise, there are no significant auditory cues necessary during gameplay and making progress does not rely on sound.

I agree with you Brad on this one. This is probably the best tomb raider game in a long time. Edios should make more lara croft games like this, with a better story of course.

Boy, you guys have been kind of vicious lately. Aside from DLC and episodic games, barely any mainstream release has come close to a 9. Most barely make it to an 8. Only Bioshock 2 and SMG 2 managed to obtain serious accolades. I thought Starcraft 2 might reach that pinnacle, but that was barely above average.

I guess that’s what keeps me coming to the site though.

I played LC for about 2hours with a friend. It has to be one of the best co-op games i have ever played. Usually i am the more hardcore gamer in co-op games (especially local) and also the one who takes responsibility to handle most situations. In LC however, it’s truly a team play. Both characters are essential and you need cooperation to solve 99% of puzzles/situations. Fantastic implementation of co-op. The only game that comes close is Trine (3 players). As for playing the single player, to be honest i never finished Trine because i played the first few… Read more »

hey Alv, That’s a fair question, but once you play the game you’ll see that there’s not much different to evaluate. the only big change is that Lara has Totec’s spear (and Totec runs away – WTF?) but the rest plays out identically except for a few tweaks here and there to accomodate the lack of a 2nd person. Others may disagree (and i’d love to hear it if so) but I didn’t see a need to complete it a second time to be able to tell it was FAR better as co-op. the way the abilities are split is… Read more »

Hey Brad, I’m not sure how you can review/rate a game and pass comment that it’s better as a 2-player game having spent only a *single hour* on the single-player…???

But good on you. You’re the only one who has contributed any articles for nearly two weeks. Does anybody else actually do any WORK at GameCritics??? I know it’s vacation season and all that, but still… you ought to demand a bonus.

The other reviewers need to pull their fingers out!