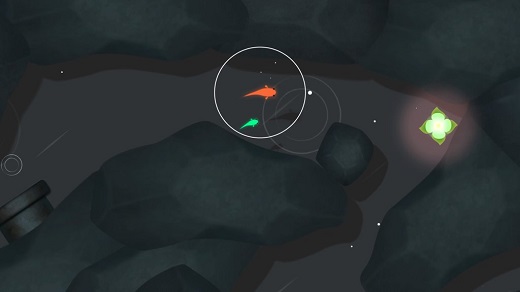 HIGH The concept is great.

WTF Why are we in the stars now?

According to the PR materials, Koi is the first Chinese-developed indie to hit PSN in the West. If this is the sort of quality we can expect, then it may be the last.

Koi is about a fish in a pond who’s doing… something. I can’t quite tell what the purpose or plot of the game is, and I don’t think the game knows, either. Seen from a top-down perspective, the player navigates their koi around lily pads to gather stray fish that match the colors of lotus flowers in other parts of an area. When a fish and a lotus of matching colors come together, the player gets some sort of light energy.

Initially the game seems to be going for a Flower eco-themed kind of thing, as there’s mention of pollution and cleaning up the environment. That doesn’t bear fruit, though… there’s no evidence of corruption except for a few black-colored enemy fish, and I don’t quite understand how matching colors cleans anything up. Later on, my fish was unlocking gates, and then there was some flying in space because I don’t know why. The ending (unrelated to gates, pollution or space) had me scratching my head.

Koi‘s gameplay feels as undercooked as the narrative. Aside from reunifying fish and flowers, there’s a random hodgepodge of things tossed into the mix. Honestly, it feels like a different team worked on every level, and none of them were talking to each other.

For example, at one point the player is rushed down a river with a strong current, and it’s not clear whether they should follow or fight the current, and then the level just ends. In another stage, a random fish gave me his powers without anything noticeable happening. The game kept prompting me to return towards him, but what I actually needed to do was to swim up and around towards a part of the screen which had nothing to signify that it was a finish line.

At one point, swimming is put on hold to present the player with a Memory-matching game, and in another area there’s a bit of Simon Says that comes out of absolutely nowhere. There are also stars and puzzle pieces to collect, because… games need collectibles? It seems painfully obvious that the developers couldn’t think of more content that could be integrated with their concept of fish, but they threw some in anyway.

I like the idea of taking a fish on an unconventional journey, but Koi isn’t atmospheric or relaxing enough to be a chill game, and the gameplay isn’t substantial or clever enough to make it a puzzler. Koi feels like the sketch of something that was half-finished at a game jam, yet somehow it’s available for paid download on PSN? Throw this one back. Rating: 2 out of 10

Disclosures: This game was obtained via publisher and reviewed on the PS4. Approximately 2.5 hours of play were devoted to the single-player mode, and the game was completed. There are no multiplayer modes.

Parents: According to the ESRB, this game contains No Descriptors. It’s a few little fish swimming in water and once in a while a bigger fish shows up and bumps them. It’s about as safe as a game can get.

Deaf & Hard of Hearing: There’s no dialogue in the game and all info is presented via text. No audio cues are necessary for play. It’s totally accessible.

Remappable Controls: No, this game’s controls are not remappable, but they are very simple—the left stick moves the fish, and that’s pretty much it beyond menu navigation.