Awful and Awesome in Equal Measure 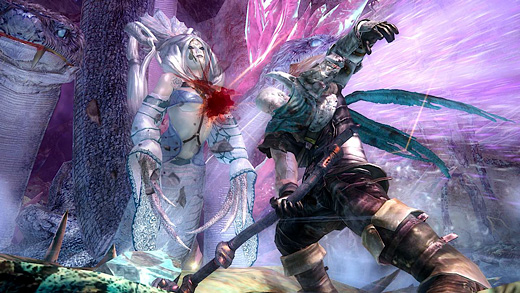 HIGH Many of the boss fight "conclusions" are jaw-droppers.

LOW The absolutely wretched signposting in the confusing free-roam levels.

WTF Minukelsus is… a supreme bad-ass?!?

main review by Trent Fingland and the second opinion by Eric Bowman, it's likely that you've been convinced to stay away from Game Republic's final effort, but if you ask me, that would be a bit of a shame.

It's true that this title has some problems. I won't argue that, and really, it would be silly to since the developer (before they dissolved, anyway) was well-known for creating things both brilliant and catastrophic in equal measure. As a critic I find their work endlessly fascinating because I have no idea how they can get some things so right, yet leave others so terribly, terribly wrong. In fact, Game Republic's work is so consistently bad and good at the same time, it's almost as though they design it that way intentionally.

For me, the biggest problem with Knights Contract is something that Eric touched on briefly; getting lost in certain levels. When the player is asked to travel in a relatively straight line from Point A to Point B, the different elements of the game fall into place and things hum along quite smoothly. However, there's at least one big section in each level that wants to be open-worldish. The player is often asked to fetch a key or flip a switch over here before being able to advance through a locked door over there, and that's where it all goes to hell.

Most games handle this sort of rudimentary puzzle without blinking, but the map function in Knights Contract is absolutely worthless, the level designs have a knack for turning a player around without them knowing it, and the people plotting out these sections don't seem to have even the faintest grasp on the concept of "signposting." These sections are absolutely awful, and I hated every one. I am not at all ashamed to say that I hit GameFAQs at least once or twice every time an open-world part popped up, and I would highly recommend anyone playing this game do the same. It's just not worth the frustration of trying to get through these without help.

So, assuming that a player will have access to a walkthrough for these segments, I do feel comfortable in saying that the rest of the game makes for a greatly entertaining weekender. 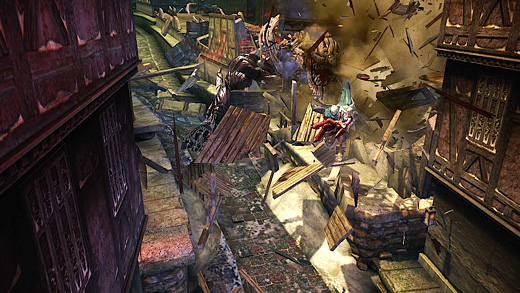 Game Republic has never been a studio that slouches in the visual department, and that holds true here. While not on the bleeding edge of technology, I found quite a lot of the game to be pleasing to the eye and interesting to view. There are certain areas that are even mildly breathtaking, and the mood of each level is well-set. Speaking of visuals, I do think it's worth mentioning that the designs for the game's bosses were outstanding.

Since each end-stage encounter is against a female witch, it would be reasonable to expect that they'd all be variations on the heavy-breasted, sexy spellslinger stereotype.  This is definitely not the case—if you ask me, the art team did a fantastic job of exploring different approaches that are not traditionally taken with female characters. For example, one boss is a flayed skeletal horror wrapped in flames, while another is an enormous storm titan with no "attractive" characteristics at all. Almost all of them display an unusually egalitarian take on women, and it was one that I very, very much appreciated.

As for the main characters, Heinrich and Gretchen, I was happy to see that there was never any sexual tension or innuendo between them. Their characterizations aren't the deepest, but I thought they were a neat pair and the balance between taking out enemies and keeping Gretchen safe was much more engaging than I imagined it would be. I'm not a fan of escort missions (who is, really?) but Knights Contract did a fine job of making the caretaking a mechanic to be participated in, rather than hanging it as a weight around the player's neck.

While I may disagree with my fellow critics about some parts of Knights Contract, the one area it seems we all enjoyed was the combat, and rightfully so—the overpowered, visually explosive magic attacks created by the teamwork between Heinrich and Gretchen are instant entertainment. They are so over-the-top, in fact, that I almost couldn't believe that the developers didn't put a constricting leash on the action with a limited pool of magic points or anything equivalent. As long as Gretchen is kept safe, the player is free to deal out ridiculous amounts of damage practically at-will. Is it balanced? No, not really. Did I like it? You better believe it.

(Oh, and those QTEs when finishing off bosses? I don't think they're nearly as hard as people make them out to be, and the sequences of brutal action that happen during them are frequently amazing. Good stuff.)

As I mentioned earlier, every title Game Republic has ever put out has been a grab bag mixture of brilliance and bollocks. Sometimes it's worth putting up with the bad in order to enjoy the good, and sometimes it's not. In the case of Knights Contract

, I think it is. Grab an FAQ, get through the open-world sections as quickly as possible, and then sit back and enjoy unleashing hell in a game that makes a lot of interesting choices in between the terrible ones. Rating: 6.5 out of 10.


Disclosures: This game was obtained via rental and reviewed on the Xbox 360. Approximately 12 hours of play were devoted to the single-player mode (complete 1 time). There are no multiplayer modes.