The game made for no one. 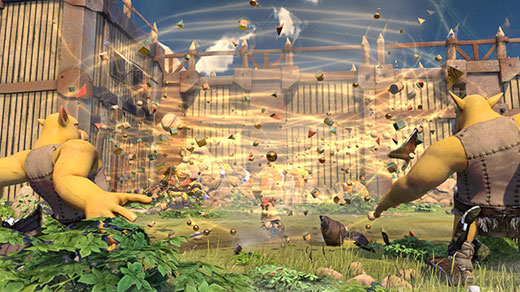 HIGH Growing to giant size in the final level.

LOW Getting tired of the gameplay with two thirds left to go.

WTF Seriously, who was this game designed for?

Although my tastes don't always sync up with others', it's easy to understand the appeal of genres that don't grab me. Racers let players go fast in expensive cars, shooters turn virtual killing into high-energy action, and so on. In most games, the intentions of the designers are generally obvious.  As such, it's unusual to come across a game that struggles with its own identity and seems designed for absolutely no one, yet that's exactly what Knack

is. It's ostensibly trying to fill a mascot-driven actioner's role, but beneath the surface is a mishmash of the most confused, contradictory design I've ever seen.

Players take on the role of Knack, a golem-like creature composed of special artifacts discovered by a scientist.  He can punch, run, jump and dodge, and has three super attacks that can be used after collecting energy crystals.  He can also grow in size by incorporating artifact pickups into his body, as well as certain other materials he comes across.

Judging by its looks, this third-person platformer seems meant for to children. The bright, cartoonish aesthetic reminiscent of Astro Boy creator Osamu Tezuka's work certainly checks that box, but appearances are deceiving – it's not nearly as friendly as it seems.

Despite the ‘hi kids!' aesthetic, the developers have built the entire game on a foundation of combat that requires fast reflexes to avoid quick KOs. Knack can sometimes take a couple of light hits depending on his size, but there's no shortage of enemies delivering one-hit kills.  Between sometimes-unpredictable enemy attack patterns, mixed groups attacking at once and checkpoints which should be more frequent than they are, this is a good recipe for frustration.

In complete contrast to the combat, the platforming is toothless and simple. It's easily accomplished by small children (like mine, for instance) which absolutely flies in the face of how brutal the enemies are. In fact, the effortless jumping and environmental navigation is such a non-issue that when approaching chasms or large drops, the game usually switches to a cutscene as Knack maneuvers across without any input from the player — not even a QTE. As such, the game is reduced to being a long hallway broken up by absurdly lethal fights.

I genuinely can't understand how Knack wants players to spend so much time dealing with split-second combat, yet doesn't trust them to make complex jumps or to navigate through anything more complicated than an L-shaped corridor. Worse, the combat isn't remotely rich enough to sustain a game as needlessly long as Knack's twelve chapter slog.

Similar to the oversimplicity of the lobotomized platforming, Knack seems sure that players can't handle new techniques or abilities. He starts with a small set of skills that don't change as the game goes on, with only occasional twists that are discarded after a section or two. For example, in one area Knack absorbs crystals to become clear enough to pass through lasers. Neat idea, yet once he's through, the mechanic is used again only once. The same goes for when he picks up ice, flaming logs or scrap metal – the properties he gains are discarded after just one or two instances.

Even more baffling than core mechanics which never evolve is that Knack's quirk of expanding his size is kept under tight reign at all times.  He's never bigger than the developers want him to be in any given section, and is often forcibly shrunk before hitting certain fights.  I can't fathom why the developers gave the character this power without capitalizing on it in any real way – when finally giant-sized in the last area of the game, it's a treat to see the sense of scale that's achieved. It's debatably the best part of the entire adventure, yet makes up only a tiny fraction of the running time.

Everything else in this title feels just as undercooked. I can think of at least a dozen ways that Knack being made of small parts could be used to spice up this formula, but the developers never go there.  The writing offers glimpses of significance, but none of the threads are followed to any satisfying conclusion. casino land  The characters aren't particularly appealing – they often border on being callous or arrogant, and Knack has no real personality to speak of.  His voice is neutral, he rarely has an opinion, he displays no notable mannerisms, and his attacks don't have any flair.  For a creature that can balloon into a three-story tall Muppet made of metal, his most prominent trait is being bland.

I have absolutely no idea what caused Knack

to be the kind of game that is, because it just doesn't make any sense.  Whether it's the case of being a a vanity project that went unchecked or just another could-have-been that lost its way while rushing to meet the PS4's launch date, the bottom line is that it's a misguided title too simple for adults and too difficult for children.  After openly wondering who it could possibly appeal to, my fellow writer Scott Nichols summed it up best – Knack is made for Ninja Gaiden fans who are nostalgic for Crash Bandicoot, and also under 10 years old.  So basically… nobody. Rating: 4 out of 10

Disclosures: This game was obtained via publisher and reviewed on the PS4. Approximately 9 hours of play were devoted to the single-player mode, and the game was completed.  One hour was spent in multiplayer mode.

Parents: According to the ESRB, this game contains: Fantasy Violence. Knack punches bugs, robots and humans, but it's not graphic past what might be seen in a cartoon. There are no sexual situations and no salty language. The gameplay is too hard for kids, but otherwise it's not offensive in any way.

Deaf & Hard of Hearing Gamers: subtitles are available for all of the cutscenes and there are no auditory cues necessary for gameplay.  It's totally accessible.