If you're not gonna eat that meat… 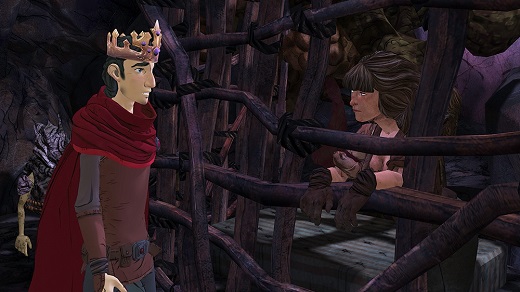 HIGH Saving all my friends…

LOW …but I didn't save everybody.

WTF Who was making all that porridge, anyway?!?

After the surprisingly wonderful debut of King's Quest: A Knight To Remember, I couldn't wait to crack into the next episode, Rubble Without A Cause. While it's quite different in tone and pace, I enjoyed it every bit as much—although to be fair, it's nowhere near the same happy-go-lucky adventure that the previous was.

As the story begins, Graham has ascended to the throne and some time has passed. The crown weighs heavy on his brow, and while on a walk to escape the troubles of the court, he and the rest of Daventry are kidnapped by goblins and imprisoned in their underground lair.

While there are still plenty of laughs and the previous episode's humor is present, there's no denying that things are much grimmer this time. The problems begin when the prison's food supply dries up. Every captive taken from Daventry now has a life meter, and after going a certain number of days without food, they perish.

More time can be bought by feeding the captives, but food is quite scarce and this new keep-them-alive mechanic puts heavy pressure on the player. Making decisions about what to do and who gets to eat are tough, and when Graham goes to bed after completing all possible tasks during that day, the majority get one step closer to the hereafter.

Rubble is also different from Knight in that the entire game takes place inside an underground prison. While Graham can still roam around at will, the environment is much smaller and the player will be retracing their steps to the same locations several times in order to accomplish various tasks in specific orders. Overall it feels like there's less to see, although it's certainly justified by the narrative.

While I appreciated the shift in Rubble's design, I wouldn't want every episode to be as intense as this one, and I strongly suggest that players get a piece of paper and pen (yes, I'm serious) before starting. Take notes about what there is to do, and pay special attention to how much health each character has each day.

I was quite meticulous about maximizing my actions and I kept a close eye on the prisoners. Thankfully, nothing catastrophic happened and my townsfolk made it out alive, but I've heard from friends who made errors and either lost key characters or felt like the deaths were too great and just restarted the episode… I imagine that appreciation of Rubble would dip quite a bit when such misfortune crops up. Take notes!

In terms of outright complaints, there isn't much. I noticed one instance where the game's animation didn't seem to kick in correctly during a cut-scene, and I suspect that Deaf and Hard-of-Hearing players will be stumped by a music-based puzzle with insufficient visual cues. Otherwise, it's golden.

While the threat of so much death in such a short period of time might throw fans of Knight's sunshine for a loop, Rubble Without A Cause felt different and fresh, and I'm glad that The Odd Gentlemen didn't just do a repeat of the previous installment.  Good work, Gentlemen… You've got me hooked. Rating: 8 out of 10


Disclosures: This game was obtained via publisher and reviewed on the PS4. Approximately 4 hours of play were devoted to the single-player mode, and the game was completed. There are no multiplayer modes.

Parents: According to the ESRB, this game contains: fantasy violence. This game is utterly safe. The most violent thing that happens is when a goblin gets conked on the head and lives; although when characters die, the player sees them carried out on stretchers. Graham tries to solve all solutions nonviolently, there's no salty language and no sexual content. It's perfect for kids.

Deaf & Hard of Hearing: All dialogue offers subtitles, but D/HH players should know that there is a music-based puzzle. There are some small visual cues, but it's next-to-impossible to solve it without being able to hear. A FAQ will be in order to get past it, but otherwise the rest is fully accessible.