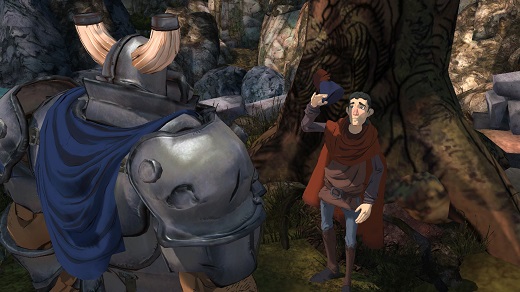 LOW I could not figure out those squirrels.

WTF Most of the trophies are way too obscure.

Full disclosure: I've never played the original King's Quest games. Despite being aware of them for years, I didn't have a computer in my home until later in life, and the few point-and-click games that I did get to try here and there left me cold. By the time I had the ability to go back and check them out, I had no desire to.

With this in mind, I paid no attention to news that King's Quest was being rebooted by indie studio The Odd Gentlemen. In fact, I probably never would have tried it if the first episode hadn't been free on PS Plus. Since "free" is my magic number and I had a bit of time, there was no risk in downloading A Knight To Remember, and I'm glad that I did.

As a total newcomer to King's Quest, I have no idea how much of Knight is a remake or how many callbacks to the original material exist, but taken on its own merits, it's a superb point-and click puzzler with loads of charm, great presentation, and none of the obtuse, run-for-a-FAQ nonsensical puzzles that I associate with the old-school stuff.

The game begins with a young man named Graham traveling to the city of Daventry. His aim is to become a member of the King's court, and he means to accomplish this goal by winning a tournament against other knights who've got the same idea. Of course, things get off to a bad start for Graham, and he'll need to find creative ways through the many barriers that stand in his path.

In terms of general design, it's a shortcut to say that A Knight To Remember is similar to what Telltale has been turning out lately. The player is able to navigate around simple environments, talk to people, inspect items, and so forth. Occasionally there are cutscenes and a few basic quick-time events, but mostly it's about picking up things and using them in the right places.

A Knight To Remember isn't exactly like its competition, though – the biggest difference is that there's more doing. While I enjoy their writing, Telltale's recent work has become more passive, and feels too much like ‘watching' and not enough like ‘playing'. In contrast, King's Quest gets the player actively involved in solving problems by exploring environments, talking to people, making choices, trying different solutions, and so on.

Despite my appreciation of the livelier gameplay, I usually cringe at point-and-clickers because I find it difficult to follow the ‘logic' of the puzzles, but King's Quest strikes a great balance between esoterically clever and approachably obvious. I had a few instances of head-scratching, but most things made a fair bit of sense when taking the lighthearted tone of the story into account. Also, it helps that it's easy to randomly try every item in Graham's streamlined inventory on a puzzle when stuck.

While solving things is satisfying, the presentation is the real standout here. The story is structured as a frame narrative, with present-day grandpa Graham telling stories of his younger self. It's got quite a bit in common with the film The Princess Bride, complete with narration and a precocious granddaughter interrupting by asking questions every so often. It's utterly charming stuff.

The visuals in Knight are superb, with everything lushly illustrated in a semi-celshaded manner, sporting rich colors and animation. It all sports a non-threatening, cartoon-like quality, and that's meant as praise in the best possible sense. Although the puzzles are a little too tricky for my six-year-old, he was captivated just watching me play.

The voice actors are as excellent as the art direction. Film actor Christopher Lloyd takes the role of elder Graham, and a number of other well-known voices fill out the cast. Of special note is the inclusion of Wallace Shawn – yet another link to The Princess Bride in more ways than one.

With such great actors on board, it's a relief that they're well-used by a strong script. The entire episode is full of puns, clever jokes, and silly situations… It's all pleasantly light and enjoyable, with lots of humor, energy and character. It's not an easy trick to keep the attention of players both young and old, but the writers manage it.

My thanks go out to whoever at Sony was responsible for choosing King's Quest: A Knight To Remember as a free Plus title. It's an outstanding piece of work that surprised me not only for being a wonderful experience in a genre that I usually avoid, but also by coming from a studio whose past work gave no clue that they were capable of such. My hat is off to the The Odd Gentlemen, red feather and all. Rating: 9 out of 10


Disclosures: This game was obtained via Free PS Plus download and reviewed on the PS4. Approximately 6 hours of play were devoted to the single-player mode, and the game was completed. There are no multiplayer modes.

Parents: According to the ESRB, this game contains: Fantasy Violence. This game is utterly safe. The most violent thing that happens is when a dragon (potentially) takes an arrow in the eye and lives. Graham tries to solve all solutions nonviolently, there's no salty language and no sexual content. It's perfect for kids.

Deaf & Hard of Hearing Gamers: No audio cues necessary for play and all dialogue offers subtitles. It's fully accessible.

Personally, I love what they did with the trophies. The Odd Gentlemen had the unenviable task of trying to please newcomers to the series like yourself, but also not to overly anger a small niche of extremely picky fans. Trust me when I say that old-school Sierra adventure game fans are the absolute worst. I should know; I’m one of them (sort of.) Those fans wanted a game with get-you-stuck point-and-click puzzles, but those don’t really fly in today’s market, for obvious reasons. The trophies seem like they were Odd Gentlemen’s way of putting in some optional stuff for the… Read more »