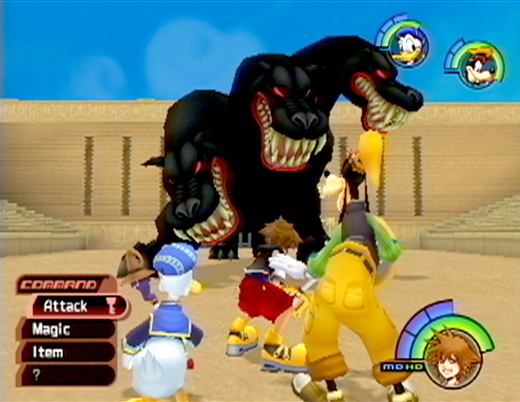 When one thinks of lush, cinematic video games, the first name in anyone's mind is Square. There isn't a gamer alive that hasn't at least heard of Final Fantasy. When thinking of mass appeal, worldwide recognition and a history in animation, Disney is second to none. Each name evokes something akin to cultural power, not to mention unquestioned success and admiration even from their detractors. To think that these two institutions were going to join forces inspired a feeling approaching true awe. Its been a long, hard wait since that first glimpse of what promised to be greatness. However, despite giving every indication of being a near-cosmic event, the promise has gone unfulfilled.

Kingdom Hearts is the tale of a young boy named Sora and his battle against evil forces called the Heartless. In the game, Disney films such as Tarzan, Aladdin and The Little Mermaid (among others) are portrayed as being their own separate "worlds" floating in space. King Mickey rules them all from the Magic Kingdom castle, but his throne is empty and he has vanished. Sora is soon sucked into this "Disney Dimension" and eventually teams up with Donald Duck and Goofy in order to find Mickey and stop the Heartless.

The first thing that catches a persons eye with Kingdom Hearts is the mix of characters taken from both companies stellar stables. While the overwhelming majority of the game is comprised of Disney creations, a large number of faces from the Final Fantasy franchise have roles. Its a fans dream come true to see Aeris return from her controversial death, not to mention seeing perennial favorite Cloud Strife and his immense sword, or chatting up the ever-present Cid. The Square characters are far outnumbered by Disney luminaries, though. Nearly every major Mouse House character makes an appearance in one form or another, and the game even provides a short record of "Who's Who" so that players not familiar with the multitude of faces can keep a running tally of cameos and walk-ons.

Of course, the juxtaposition of these superstars wouldn't mean much without the lush presentation and hypnotically entrancing graphics. Given the circumstances, I would expect no less than perfection from the leading powerhouses of visual storytelling, and perfection is delivered. Things are quite clean and very sharp, the cutscenes are a dream, and the level of visual appeal is cripplingly overwhelming. Ears receive equal treatment in Kingdom Hearts as well. The Disney characters sound exactly as they're supposed to sound, right down to Donald's saliva-spraying patois and Goofy's trademarked "ahyuck". Several big-name Hollywood talents lend their larynxes to the disc, such as Haley Joel Osment (The Sixth Sense, A.I.) taking on the role of Sora and even musical group N'Syncs Lance Bass stepping in for a surprise bit of casting at the end.

To put it simply, its impossible to overstate the games intensely high level of production and resulting appeal. Between the outstanding audio and tremendous visual, you've got one of the most irresistible games in years. However, if you can suppress your spiritual reaction to embrace the game while weeping tears of joy, you'll see that things don't quite end happily ever after. 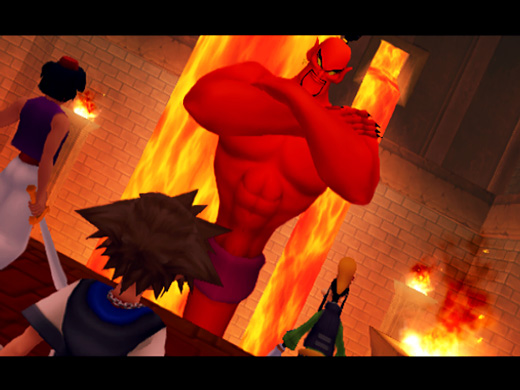 Delving past the thick strata of charm, the combination of Final Fantasy characters with various menus, summons, statistics and dialogue may lead you to think its a role-playing game (RPG), but don't be fooled. Kingdom Hearts is all about repetitive fast button-mashing and simplistic item-fetching played from a third-person perspective. Battles take place in real time, and enemies appear without any transition screens before combat. To help players along, the developers offer a choice between Automatic or Manual options for camera control and targeting. Manual is recommended to give a smoother camera and to provide a higher level of control during battles.

Your teammates (Donald and Goofy for the majority of the game) are computer-controlled and invulnerable. They can be knocked out for brief periods, but always rebound after a K.O. and re-enter the fray. Its impossible to control them or give them orders on the fly, but their actions can be governed by a simple set of instructions on one of the games menus. The available directives determine the level of aggression or frequency of magic and item usage. Its nice to have some backup for taking out a few foes, but the lions share of work (naturally) falls to the player.

This play formula initially sounds fine (though perhaps uninspired), but for a game that aims to be fast action with platforming elements, the delivery is a colossal failure. Many have voiced dissatisfaction with the cameras Automatic handling system, but the more grievous error is that the viewpoint is too low and too close to the action. The creators seem so obsessed with showing off the beautiful character models that the screens constant close-up impedes any kind of smooth and satisfying gameplay. Things are often reduced to complete visual chaos with heroes, villains, magic effects and explosions all jumbled into one confusing optical mess. Its also difficult to see incoming airborne projectiles, and an enormous amount of time is spent continually reorienting the camera to keep enemies in your field of vision. With proven action experience like the superb Brave Fencer Musashi under their belt, I'm utterly amazed that they didn't correct the obvious problems going on in Kingdom Hearts.

It might have been possible to deal with such a ridiculously bad setup if melee was limited to bosses and occasional encounters, but in a wicked bit of irony, the miserable perspective is paired with an insanely ludicrous amount of battling. Nearly every time you enter a room you'll be barraged by an onslaught of Heartless that regenerate the very next time you re-enter. To add insult to injury, you cant even access your menus or perform simple actions like opening doors or chests during the brawl. You are literally forced to slaughter floods of enemies before you're allowed to do anything else. I wish I could more effectively put into words the feelings of despair and aggravation I felt during these seemingly infinite battles, but there's no describing it. All I can say is "Too Much."

Either of those elements alone would sink any standard game, but those combined with confusing level designs and relentlessly menial key hunts ensure that the game plays more like a nightmare than a dream. Was combing levels for inconsequential items while abusing the attack button supposed to be a good use of these characters? I cant even imagine how the game turned out the way it did. Most of the Square fans wanting to see the home team will be used to slower, traditional turn-based RPGs. Casual Disney fans wanting to play their favorite film will be smashed by the games constant battles, difficulty and awkward construction. Platform fans will be dissatisfied with the numerous technical shortcomings. Exactly who was Kingdom Hearts made for?

The hardest part of writing this review was coming to grips emotionally with how poor this game is. I wanted to like this game so much that even now, I can hardly believe it. Square plus Disney, enough said! How in the world could anything possibly go wrong? Considering that the games concept had me in its pocket from the get-go, Square really went above and beyond the call of common sense and good taste by systematically destroying every element of the gameplay. Kingdom Hearts is one of those rare games that has an infinite amount of cool, but a deadly serious lack of fun. Its sad, but in spite of this I'm sure the game will sell millions of copies based on the charm of its licenses and the power of its cutscenes the ultimate triumph of style over substance. This game is rated 6.0 out of 10.

Parents should be fairly comfortable with their teens playing this game. Yes, it contains some mature themes and plenty of violence, but it's all presented in a fairly innocuous fantasy context, more than safe for anyone who's seen The Lord of the Rings, for example.

Fans of the series have no reason not to pick this one up. It's all as good as it ever was.

Deaf and hard of hearing gamers won't have any trouble at all. Everything of importance is subtitled, and there aren't any important audio cues.