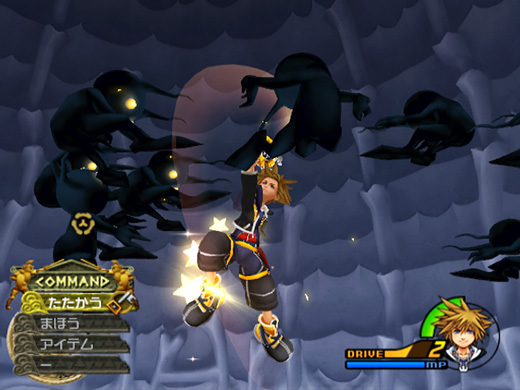 In 2002, the original Kingdom Hearts was slated to be the biggest hit of the year. Role-playing game (RPG) super-producers Square took favorite characters from their mega franchise Final Fantasy and mixed them into an all-new setting starring nearly every Disney character created. The game had everything going for it, and generated hype that most publicists would sell both kidneys for. It was a smash success in terms of sales, but once the excitement over the collaboration cooled off, it was plain to see that the core structure and play experience were fatally flawed. I wanted to love Kingdom Hearts, but no amount of fan service or eye candy could compensate for the fact that the gears underneath its gorgeous exterior were ill-fitting and wrong.

Fast-forward four years to the release of Kingdom Hearts II. The difference between the original game and its sequel are like the difference between night and day. Every place the first was flawed, the second polishes to perfection. The aspects that formerly irritated and infuriated me are completely gone, replaced by choices that make more sense and enhance the experience. The wretched Gummi ship? It's great. The tooth-gnashing difficulty level? Solved. Every part of the design that went wrong now goes utterly right and instead of walking away bitterly disappointed, Kingdom Hearts II kept me engaged with a level of quality that few others could hope to match.

For those not familiar with the saga, Kingdom Hearts II continues the story of Sora, a boy from a small island swept up in an adventure that spanned several Disney-themed worlds and led to his eventual triumph over the Heartless, an evil force threatening to destroy the universe as mouse-lovers know it. This time around, the Heartless are joined by the Nobodies, a new faction led by the mysterious Organization XIII, first seen in the GameBoy Advance title, Kingdom Hearts: Chain of Memories. Sora's stalwart companions Donald Duck and Goofy return for the ride, and our gallant trio are joined by a rotating cast of motion-picture luminaries such as Aladdin, Simba, Jack Sparrow, Hercules, and several others, too many to mention here.

Kingdom Hearts' central concept of real-time combat mixed with an RPG-style story and quest elements remains the same, only reworked and burnished to an unbelievable level of flow, easily eclipsing everything previously accomplished. The first game's absurd number of enemy encounters has now been brought down to reasonable levels, and the old stop-start keyfetch tasks that made up the bulk of gameplay have been transformed into objectives that fit naturally within the narrative framework in each area. It's not that playing through the game feels radically different, it just feels radically faster, friendlier, and better. 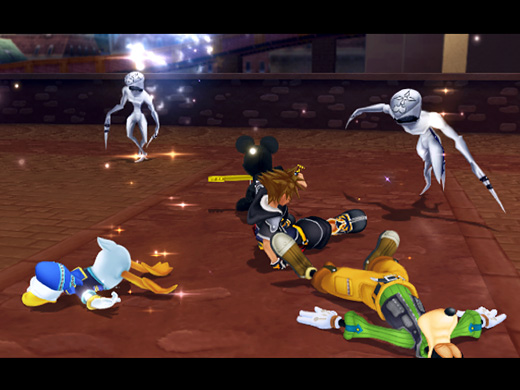 Technically, the combat is vastly improved. One of my main issues with the first Kingdom Hearts was that the camera was so low and close to the action that it was virtually impossible to understand what was going on. I'm extremely glad to report that this is no longer an issue since the perspective has been pulled back and functions properly. Now that seeing the action is possible, Square Enix made it dynamic to watch by adding a wide range of skills to keep things fresh and exciting. Special note must also be made of the Reaction Commands, situation-specific maneuvers that vary depending on Sora's position and the enemies faced. For example, when going up against standard Nobodies, Sora can whip around behind them for a surprise strike. When closing in on the final boss, he can slice an entire building in half and charge through the rubble. Taking advantage of these ever-changing abilities adds both tactical advantages and cinematic excellence to nearly every encounter.

Although I usually try to avoid putting too much emphasis on graphics, it must be said that Kingdom Hearts II is an absolute showstopper, impossibly smooth and displaying the highest level of workmanship conceivable on the PlayStation 2. Square Enix is unmatched in this area, and the spectrum of artistic styles on display is amazing. The game as a whole sports a very clean, simplified set of lines, but the use of color is superb and the variation between the old-fashioned black and white look of Timeless River gives sharp contrast to the neon electronics of Tron's Space Paranoids, or the soft, bedtime warmth of Pooh's Hundred-Acre Wood. Square Enix's animators also set a lofty bar in terms of expressiveness and body language. Characterization and personality traits are conveyed with small shrugs and subtle movements that simply don't exist in most RPGs.

It would be easy to complete this review without pointing out any weak areas—there practically aren't any. But, if I had to focus my critical powers of examination to their utmost, I would say that my only complaint would be in relation to the central story. There's great satisfaction to be had solving the problems on each individual Disney-themed world; helping Ariel find love in Atlantica or saving China from attack in Mulan's land are each their own reward, but the motivation behind Organization XIII and its Nobodies was a little too convoluted and abstract for my taste. It made sense in a very esoteric way, but the writers are operating from a diaphanous premise that splits emotional hairs. I would have preferred something a little more concrete when it came down to the final resolution.

Even so, it's hard to deny that from its humble beginnings to the spectacular finale, Kingdom Hearts II is absolutely what the first game should have been. Its production values are still amazingly high, but the mechanics and tactile experience of play are now equals. Totally pleasing to the eyes, hands and brain, Square Enix has turned out an unquestioned masterpiece that ranks as one of the finest experiences the PlayStation 2 has to offer. My hat is off to the people behind Kingdom Hearts II—it's extremely rare that a sequel manages to address every issue that needs attention while not sacrificing quality in another area. But, Square Enix managed to recover from their stumbling first effort and have pulled off this sequel with such signature style and grace that it's easy to see why they continue to reign supreme in the realm of role-playing.

According to ESRB, this game contains: Mild Blood, Use of Alcohol, Violence

Parents don't have much to worry about. The same type of child-friendly content that is famous for has been faithfully adhered to by Square-Enix. Most of the game consists of the main character thwacking surreal-looking monsters that puff into spheres and gems when defeated. There is some combat between humans, but most of it employs fantasy weapons (purple laser guns, etc.) and none of it is ever gory or explicit. I believe the alcohol mentioned on the back of the box refers to some of the Pirates (from the Caribbean) drinking grog, but alcohol use or any other type of substance use is not a significant issue. There is no questionable language and no sexual content.

Action RPG fans will be treated to one of the best games on the PlayStation 2. The blend of real-time combat and RPG elements is perfect. The fighting is fast and , and includes enough features and customizability to remain engaging throughout. The RPG side is just as robust with plenty of top-quality cutscenes and numerous different story lines to follow on each of the separate Disney worlds. There aren't very many side quests, but the ones that are there are doozies—Sephiroth cuts no slack.

Disney fans finally get the game they should've gotten in the first place. The developers offer three difficulty settings to ensure that players of any skill level can bring the game to completion, and the cutscenes feel just like you're watching a film. In fact, some parts of the game actually expand on each movie to give a "further adventures of…" feeling. The selection of Disney films is now greater than ever, Pirates of the Caribbean and Tron being my two new favorite additions.

Deaf and Hard of Hearing Gamers will have no problems. All cutscenes (and there are lots) are fully captioned, so no dialogue is ever missed. During battle, there aren't any significant auditory cues, and the reworked camera perspective ensures that everything on screen is very visible and easy to understand. Thumbs up, everything is accessible.