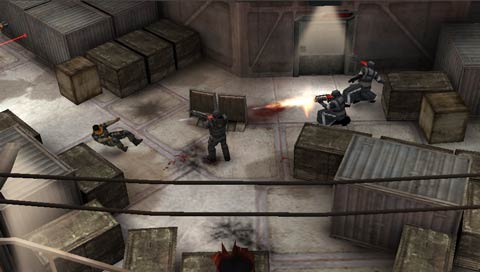 Parents should be aware that although this game isn't "mature" per se, it's definitely aimed at an older audience. The core gameplay is all about shooting human enemies, and the use of firearms features prominently. The "language" callout is in reference to a handful of expletives uttered by Templar's salty squadmate, Rico. It's only an issue in a small number of appropriate cut-scenes, but it's there. There is no sexual content whatsoever.

PSP owners and action fans should absolutely pick up a copy. Not only is it totally polished and completely accessible, it's a great example of what the PSP can do when developers take the time and make the effort to exploit its particular characteristics. Looks great, feels great, is great.

Multiplayer fans, the game offers a two-player ride through the campaign and a six-player multi mode, both available only through ad-hoc (local) wireless. I didn't have a chance to try either mode with a friend, but those are the facts as stated in the manual.

Deaf and Hard of Hearing gamers are at a slight disadvantage since sound cues like opening doors or warning shouts often signal approaching Helghast before they appear on-screen. Thankfully, frequent checkpoints will help offset this missing audio input. Otherwise, it's a great title; text accompanies all dialogue and the story is fully accessible.