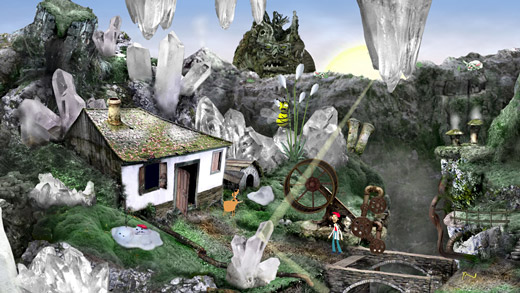 Since my copy of Mass Effect 2 will be arriving in approximately 2 days (no same-day shipping? Bah!) I'm not playing anything lengthy or substantial… everything stops when the game gets here, so I'm keeping my slate is clean as it can be.

In the meantime, I wrapped up Ninja Blade and turned in the review. You should see it go live shortly. I had an absolute blast with that title, and it was the perfect way to interrupt the extended string of RPGs I've been on lately. If you are not opposed to the idea of a game that uses QTEs as a primary mechanic of delivering action, this one is a doozy.

Following that, I moved on to XBLA's Axel & Pixel. A quirky, eccentric point-and-click with loads of personality, I fell in love with it after just a minute with the demo and did not regret purchase of the full version. The review for this game should be done soon, but basically it was a delightful little Adventure-style game from some talented people in the Czech Republic that focuses more on accessibility and charm than brain-bustingly obtuse puzzles. Finished it in about four hours, but it was pure pleasure all the way through.

Will probably start Contra ReBirth on WiiWare tomorrow, and if I blew through that than I've got a couple more things that should be quick plays to help me pass the time until Commander Shepard makes her return.

Yeah, I do kind of think a 10 should be “I like this a lot AND in my opinion, it has wider appeal.” The fact is, some people do base game purchases on positive reviews from critics they trust. For my part it’s mostly on games outside my comfort zone – Sports, Racing, Platforming, Action/adventure – where it takes a great deal of positive critical acclaim for me to buy in. With RPGs, Strategy, and Horror games, I honestly don’t need good reviews. I’ll watch the grainy youtube videos of the foreign version, I’ll sift through the terrible, biased amazon… Read more »

Crofto, I get from your posts that you don’t like that Brad likes Mass Effect, but your arguments about what reviewers in general should and shouldn’t do sounds to me a little lofty. If a reviewer took the time to play through all of, let’s say GTA IV for ex., it’d probably take a bit of a toll on their personal lives and/or take a month or three to come out (even longer for an rpg if you assume multiple playthroughs with different characters!) and be copious reading at best.. and who would want to read that? I believe the… Read more »

I’m on your side, Crofto. Game scores reveal themselves unquestionably inflated when compared with other mediums and games are definitely not as first-class as the press wants us to believe. That said, there is more to the evaluation of a game than the dissection of its design. For example, a game’s soul – and for an admirable definition of it, listen to this week’s podcast. Numerous subjective characteristics come into play when analyzing a title, making reviews an individual judgment that can never embody universal viewpoints. As such, I prefer looking them as the result of tastes and personal experiences… Read more »

ckzatwork: “Can’t a reviewer give a full score to a hyped game?” Absolutely, but what are the odds that a super-hyped game can achieve such credit? If we were to properly analyse games the clear evidence suggests that the probability of a title ever achieving a design level to warrant a 10/10 is, at best, something that may happen once every five years. The way reviewers dish out all these insane scores completely ignores that, and so we’re left with a media that believes that the majority of big-name titles are superbly designed, when they’re clearly not. This does not… Read more »

I just want to say, anyone who gives glowing reviews to Bionic Commando and Ninja Blade is hardly one to be swayed by popular opinion and hype. 😉 If anything, Brad has major huevos rancheros when it comes to staking out an opinion. That said, I’m also of the opinion that Mass Effect, otherwise known as Generic Bioware Dialogue-athon Part 3, was not a perfect or even near-perfect game. It had major, major, major problems (load times, miserable plot and villain, completely uninspired side quests, and on and on). But I enjoyed it all the same (just like I enjoy… Read more »

Hey Crofto, Well, you’ve put me over something of a barrel, haven’t you? ; ) I guess the first thing I would say is that I always strive to be impartial and balanced with every game I review. At least, as much as is humanly possible… after all, there is no such thing as a totally impartial review. We all have our own tastes and preferences, etc. Although I am a BioWare fan, I don’t love all their games equally and I don’t think everything they’ve made is golden. However, I honestly did feel that the first Mass Effect was… Read more »

Fans of a game can sometimes be the most critical of a sequel’s faults, when there really are problems with it. Only way I can see Mass Effect 2 going wrong is if they decided this was the ‘less talk, more action’ sequel, and then didn’t flesh out the combat and encounters adequately to justify the switch. I mean, Planet missions in Mass Effect 1 did get just a little repetitive. But you know, it’s Bioware. There’ll be plenty of talk, and the fans will love it.

That seems unfair to me, Crofto.

Did you finish the game? Can’t a reviewer give a full score to a hyped game? I’ve learned here, mostly because of the recent Uncharted 2 debate, that I’m no one to judge another person’s opinion. And I think you’ll agree with me that gamecritics reviewers do their best to be as honest as they can.

I assume you will be posting this site’s “main” review of Mass Effect 2 Brad so I do hope you will remain impartial and balanced when posting it. However, since you hold the original in such unjustified high esteem I feel that this website will lose a fair amount of credibility when you come back with an inevitable 10/10 score. So far I am already annoyed that yet again that moron Tom Bramwell on Eurogamer has dished out another 10/10 to hotly anticipated title. I’m now 100% confident that he doesn’t know how to review games, or that he’s taking… Read more »