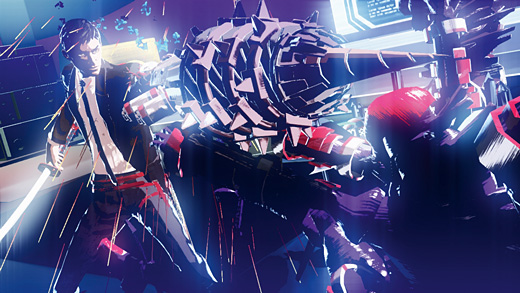 HIGH Pulling off a long combo string, ending in a flashy execution.

LOW The gigolo missions, the level design… most of it, really.

WTF How does Suda keep getting to make games?

Well-known Japanese developer Suda 51 has been involved with a series of titles which are known for being more than a little off the beaten path—No More Heroes, Killer 7 and Lollipop Chainsaw to name a few. Killer is Dead

follows in this tradition of strangeness, but being odd isn't the same thing as being good, as this title so amply proves.

Killer is Dead puts the player in the shoes of Mondo Zappa, an assassin employed by a mysterious agency. He uses his katana and morphing cybernetic arm to eliminate targets on the behalf of the clients they've wronged. I usually give a bit more background than this when doing a review, but I'm hard-pressed to give a deeper description. It's not that I'm afraid of spoiling the game, but rather, because so much of it is random and incomprehensible.

The core of the game is simple enough to grasp. Mondo is controlled from the third-person perspective, and employs a number of sword-oriented moves to take out the various enemies that show up. He can dash, dodge and counter, in addition to performing a number of other tricks which can be purchased and unlocked. His arm also transforms from a standard hand shape into a couple types of gun, a drill, and can deliver guard-break blows to shielded enemies.

Thanks to Killer's highly-stylized visuals, the action is incredibly flashy, both literally and figuratively. Bright explosions of color pop when Mondo pulls off certain moves, and watching him dash across the screen or go into slow motion before lopping someone's head off lends a nice sizzle to the action.

Putting aside the striking high-contrast visual design, actually going through the game's levels is boring and shallow. Every area feels like an empty hallway of one sort or another, and because it all generally looks the same in any given section, it's all too easy to get turned around in parts that aren't linear. There's certainly a bit of juice to the combat itself, but unfortunately, everything outside of combat is so obtusely abstract that the overall experience never comes together into anything worthwhile. 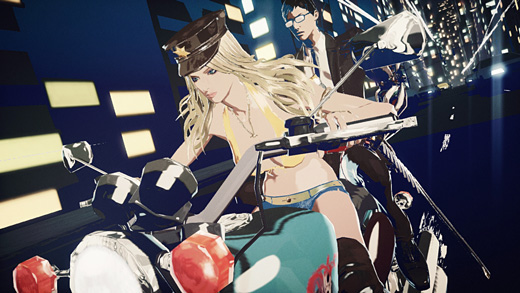 There's no context established for Killer is Dead's world apart from the "assassin" premise, and the game has no qualms about crazy. The first mission sends Mondo into a surreal Alice in Wonderland-themed house after a monster, and another finds him making his way across the surface of the moon in pursuit of a man resembling a pro wrestler. It's all topsy turvy and bizarre, and it only gets weirder from there. I'm quite willing to give leeway to creators taking risks, but little sense can be made of this mess. It feels like nothing so much as general stylistic ideas or quick sketches turned into complete levels and strung together by… I don't really know what.

In terms of other content, Killer is Dead offers side missions with bite-sized objectives; things like using a turret to gun down waves of enemies, crashing into bad guys on a motorcycle or finding all the bugs hidden in a house. They don't add anything to the narrative and the mechanics of the game aren't tight or enjoyable enough to make simply playing a pleasure.

Speaking of pleasure, I'm at a complete loss as to what value the game's so-called "gigolo missions" are supposed to add.

As the campaign progresses, Mondo will get the opportunity to meet women in a location (usually a bar) and must sneak peeks at their breasts and crotch when they're not looking. Once the player earns enough points by doing this, Mondo can give a woman a gift to "win her heart," and if it goes well enough, things transition into a bedroom scene which fades to black.

I'm open to sexual content in games as long as it has the proper context or serves some artistic or narrative purpose, but these missions are nothing more than gratuitous time-outs for T&A. They feel out of place, they're in extremely poor taste, and because there's no dialogue to be had nor any relationship to maintain, the ladies are reduced to personality-free pieces of meat which reinforce everything negative about the way women can be portrayed in games.

Between the tedious levels, incoherent story and offputting gigolo missions, I found very little to appreciate about Killer is Dead

. I grew quite tired of the shallow game design and weak attempts to distract me from its vacuous lack of substance, and put the game down before rolling credits. I don't regret stopping early, and would not recommend the game to anyone except as an example of what not to do when attempting to create an engaging, satisfying experience. Rating: 4.0 out of 10.


Disclosures: This game was obtained via publisher and reviewed on the PS3. Approximately six hours of play were devoted to the single-player mode, and the game was not completed. There are no multiplayer modes.

Parents: According to the ESRB this game contains blood and gore, intense violence, and sexual themes. Lots of blood, lots of insane imagery, and quite a bit of skin shown by the ladies in the game make for an experience which should be avoided by all children. This is clearly a title meant for older gamers, so steer little ones clear.

Deaf & Hard of Hearing: Subtitles are available for dialogue and one mission gives a visual cue (on Mondo's arm) when near hidden objects in addition to a sound "ping." I did not find any audio cues necessary for gameplay that weren't represented onscreen, so I'm calling this one accessible.

I’m only a few missions in, but I’m enjoying it SO MUCH more than either Lollipop Chainsaw or the abysmal No More Heroes games. I enjoyed Shadows but never finished it due to other commitments, but this seems at or above that level. BUT IT’S NOWHERE NEAR KILLER7. Suda just hasn’t reached that plateau again, yet I bite on every new Suda game in hopes that it might be the next Killer7. I still think this one has potential, but the gigolo missions obviously mean that some of THAT Suda got in there… You know, the one who was so… Read more »

My WTF would be “Why does Brad keep playing Suda games”?

Anyways, brief as it was, I enjoyed my time with Killer is Dead.

Besides, an alternative viewpoint on Suda’s work is necessary, IMO. Although KiD got generally low scores, I think the critical sphere has been too lenient on his work in the past.

The art style of Killer is Dead caught my interest early on, but this sounds like there is simply no substance to sustain the style.

Brad, your review is a little … lenient. Nothing in SUDA’s resume suggests he can, or even tries, to make games on the level of killer7, and it’s irritating that his name lends purchase to any crud Grasshopper tosses out to gamers. I’m convinced Grasshopper’s using its and SUDA’s names to bore people into forking over money, it’s cynical and ugly, and I’m’ glad we have the happy accident that is killer7 but that’s all we have. Horrible game.