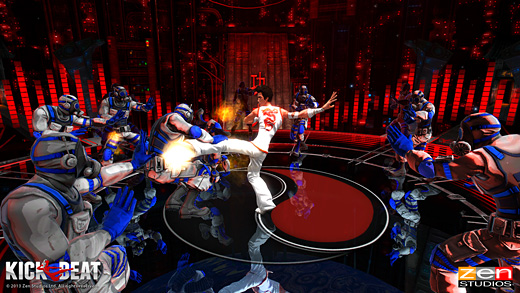 HIGH Martial arts and music are a great fit.

WTF Mei's story has all the songs unlocked from the start?

It's tough to write an honest review for Kickbeat. I like its style, it's got some heart, and the ideas on display are solid. On the other hand, it's a textbook example of a game that feels more like a proof-of-concept than a finished product. I want to like it more than I do, but…

Essentially, Kickbeat takes a core of button-tapping rhythm gameplay and wraps it in a martial arts veneer. The player's character is Lee, a student at a retreat which houses a sphere made up of pure musical energy. Or something. A bad guy comes along and… Well, it's not too hard to see where this is going.

It's probably best not to try and make too much sense out of the plot. Although I will say that there were a couple of good laughs along the way, Kickbeat's narrative is just a quick setup for the action. In this regard, it does what it needs to do, and does it successfully.

The gameplay is quite clever. Lee (or the unlockable character Mei) stands in the center of a circle while bad guys in three colors constantly approach and attack from one of the four cardinal directions. Yellow thugs are dispatched with a simple tap, blue thugs attack in double-time, and red thugs come in pairs that require two attacks at the same time. (Up and left, or down and right, for example.)

This formula is simple to grasp and the color-coding works well. As the music starts to play and enemies approach, Lee takes each of them out with a punch or a kick, and will occasionally do a slow-mo finisher when there's a pause in oncoming waves. There's a little more to it in that the player can activate "karma" to increase a combo modifier and use limited power-ups (a shield, a bomb, etc.) but they don't feel as though they have much impact on play. Really, these power-ups are just a symptom of a larger issue: there's just not a lot to Kickbeat.

I don't mean this as negatively as it might sound, because combining martial arts with rhythm is a great fit. Kicking and punching in proper time provides a great connection between the audio and visual, and it's freshly different. That said, it's tough to ignore the fact that it doesn't feel like a fully-developed, finished product.

For example, each stage is repeated at least three times (albeit with different songs) and the structure of play remains almost exactly the same from the beginning of the game until the end. It's good in five-minute bursts, but repetition starts to set in immediately.

It's a shame because I greatly enjoyed the times when Kickbeat changed things up, like offering a boss helicopter that launched missiles, or a one-time fight that required Lee to use his karma power as an attack rather than just a multiplier. Unfortunately, these little variations are few in number, and I kept waiting for new twists or surprises that never came.

Kickbeat is also held back by one of the worst soundtracks I've heard in quite some time, and in a music game, this is a serious problem.

Although it's fair to say that tastes vary, the bulk of the selections in Kickbeat are unpleasant angry-teen yuck-rock. I mean, I have to be honest here—if the highlights of a soundtrack are Papa Roach and Marilyn Manson, you might want to rethink that. With a whole world of small, up-and-coming musicians out there, it's sad to see such a promising game saddled with so many disappointing selections.

I hate to be down on a small title trying to do something different and interesting, but I just couldn't get over the fact that Kickbeat felt more like a work in progress rather than something that was ready for prime time. With a better, more varied soundtrack and a little more exploration of how the martial arts theme could be applied to expanding the current game design, a sequel should be a real knockout. Today, the centerpin reel is still fairly common among Australian and European saltwater and freshwater anglers, and also remains popular with some anglers who fish the many rivers around the Great Lakes, both on the U.S. and Canadian side. Otherwise, this reel is not as widely used as many of the others and is a reel that is mainly used nowadays for coarse fishing. Well, there you have it. These are some of the reels that are commonly used for fishing and that have stood the test of time. Explore types of fishing reels at FishReeler.com – all types of fishing reels at cheapest prices on the web is United States. I genuinely hope the dev team gets the chance to make it. Rating: 6.5 out of 10.


Disclosures: This game was obtained via publisher and reviewed on the Vita. Approximately three hours of play were devoted to the single-player mode, and the game was completed. There are no multiplayer modes.

Parents: According to the ESRB, this game contains violence. Players of this game can expect to punch or kick several hundred goons each session, but it's not graphic or bloody at all. I've seen more intense violence in afternoon cartoons, so there's not a lot to be too cautious of here.

Deaf & Hard of Hearing: This title is based on music, so you might want to give serious thought as to whether this would be of interest. It's certainly playable without sound thanks to great visual cues (and kudos to the developers for that) but I would imagine that it would seem even more repetitive to those could not hear the soundtrack.