Beating Down An Entire City… And Loving It 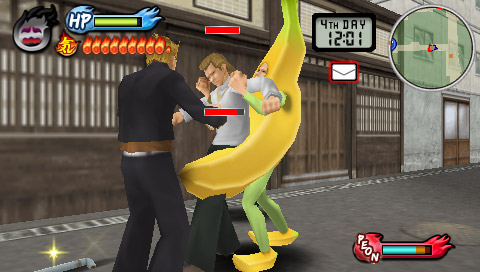 HIGH It's dripping with testosterone and has machismo to spare.

LOW Accidentally stumbling into the last battle with a sliver of health.

It's been a long time since I've laid hands on a beat-'em-up that was worth a damn.

Although the genre was once as common as bison on the plains (well… before they were hunted to near-extinction) they've been very few and far between the last few generations. While the "just fight!" formula seems quite simple, there's something about it that seems to utterly confound most developers—perhaps it's the extra effort required to flesh out a structure that used to thrive in more limited, 2D 16-bit environments, or perhaps it's that developers assume such a game will be easy to nail and don't put enough effort into the planning stages.

Whatever the reason, there just aren't many current beat-'em-ups worth talking about… until now.  Kenka Bancho: Badass Rumble is here courtesy of uber-publishers Atlus, and they were spot-on in giving it the green light. Essentially a street brawler with time-management and character customization, Kenka Bancho proves that the genre still has places to go.

Setting the stage: upon arriving in the city of Kyouto for a school holiday, the player's high school-age character decides to ditch the field trips and museums and instead sets out to become the baddest bancho in town. (A bancho is something like a "boss" or tough-guy.) However, other roughnecks from every school district in the country are also around for the same version of R&R, and it's up to the player to kick as many asses as possible. After all, as Highlander teaches us, there can be only one…

I have to admit that although I'm not at all versed in the Japanese yankii subculture that comprises the core of this game, it wasn't at all difficult to get into the spirit of things. I mean, what's more American than beating down punks and looking cool while doing it? Essentially, it's what this country was founded on, so even though many of the themes and elements in Kenka Bancho have been imported directly from overseas, it feels like a pretty natural fit to me.

Having no problem dialing into the humorous testosterone-fueled antics, it was good to see that the game holds its own technically, although it is a little rough when it comes to the details. 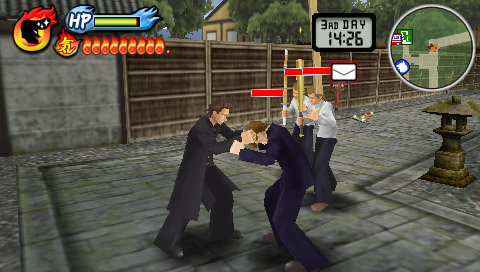 Featuring a wide variety of painful-looking maneuvers, the main character is equipped to mete out punishment from the get-go. Punches, kicks, grabs… it's all here. Wisely, the developers have also added a wide range of additional moves to unlock as the player gains experience, letting the player pick from a veritable menu of pain at will. As a result, the action remains fresh-feeling (and often laugh-inducing… in a good way) with its constant influx of new moves and styles.

On the other hand, Kenka Bancho takes one to the chin when the action starts getting heavy. Punishing a couple of thugs is just fine, but when the groups get larger, the camera tends to start pointing in the wrong direction and leaving the player open to cheap hits. There is a lock-on function, but oddly, it doesn't work as well as it should—despite a target being selected, the camera doesn't always keep it in view. It's not a huge issue, but when the pressure is on and a boss scores a world-rocking hit from off-screen, it gets more than a little annoying.

Camera issues aside, most of the fighting elements fall into place nicely and as expected, except for one surprising addition: a time limit. Since Kenka Bancho takes place over a seven-day school break, there's a clear end date to the festivities. Rather than being a hindrance, this element of time actually provides a nice level of pressurized complexity to the action.

Kyouto is a fairly big place with a lot of area to cover, and the only way that the main character can locate his opponents without wasting precious time is by finding itineraries of rival schools dropped in fights. With these in hand, it's as simple as looking at a map screen to find out where the nearest sucker to beat down is. Without them, it's hit or miss.

In total there are around 45 different factions to find and fight, but it's really about time management and staying on-schedule if they're all to be beaten before the time comes to get on the yellow bus back home. Although it's unlikely that a player will be able to defeat all the enemies on their first go-round, itinerary information (as well as all levels and moves earned) are saved in a "new game +" mode which makes things a lot quicker and easier the second time around.

All told, Kenka Bancho: Badass Rumble is a solid, attractive addition to the PSP library for fans of beat-'em-ups. Its foundations are built well, it expands on the core formula in ways that are appropriate for the current design era, and it packs enough quirk and personality to stay interesting for the length of the fist-filled vacation. If nothing else, it's certainly not a title that will be easily forgotten by anyone who lays hands on it. Just remember—fight with style or don't bother fighting at all. Rating: 7.5 out of 10.

Disclosures: This game was obtained via publisher and reviewed on the PSP. Approximately 8 hours of play were devoted to the single-player mode, and the game was completed one time. No time was spent in multiplayer modes.

Parents: According to the ESRB, this game contains Animated Blood, Suggestive Themes, and Violence. Although the game's all about beating up punks with fists or weapons, it's not especially bloody or brutal. That said, the salty language quotient is a bit higher than I'd proably feel comfortable letting a child be exposed to. This one's better left to the teens, I think.

Deaf & Hard of Hearing: You shouldn't have any major issues. All dialogue is subtitled, and the game does a good job of cueing players into the action without heavy reliance on sound. Occasionally, an enemy might perform a super-move offscreen that they player wouldn't know about if they couldn't hear the sound, but it's just as hard to notice those in the heat of battle even with normal hearing.