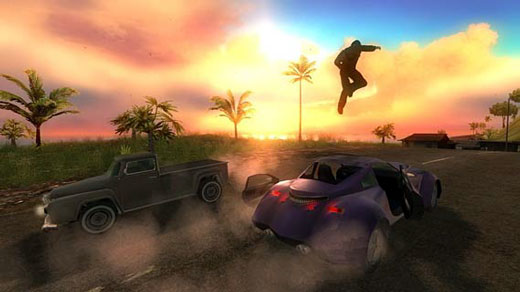 The successful balance between exciting innovation and comfortable familiarity is a delicate one. It's true that large doses of creativity can sometimes lead an otherwise solid project wildly awry, but on the other hand, there's little value in rehashing ideas and not going far enough. In the case of Just Cause, the developers have innovated with one shining addition, but otherwise let the scales weigh heavily with well-trodden material.

Hewing closely to the Grand Theft Auto sandbox formula we all know and love, Just Cause invites players along on the regime-toppling adventures of Rico Rodriguez in a fictional Latin American nation. This "revolutionary" romp will feel instantly recognizable to anyone who's spent time with Rockstar's franchise: plenty of weapons, some civilians to mess with, driving like crazy in vehicles, and just enough story to keep things moving. The developer, Avalanche Studios, set their sights low by meeting the minimal requirements in every aspect except for the one standout feature I mentioned—a parachute.

While traipsing across the strife-torn island, Rico has instant access to a talented sack of silk that can deploy and retract at a moment's notice. It may not sound like much, but this little bundle of insanity gets a surprising amount of mileage. There's a sort of liberating freedom in knowing that every precipice, cliff and tall building represents an airborne escape rather than painful death and restart. The parachute is also a means of unexpected entry, making vertical insertion behind enemy lines an extreme (in the Dew sense) and frequently exercised option.

To complement the aerial hijinks, Avalanche has also endowed Señor Rodriguez with a healthy disrespect for the laws of physics. He can leap incredible distances and thumb his nose at inertia so long as he's going from the roof of one vehicle to another (think the Spider-Man action of the PSP's Pursuit Force taken to another level) and his handy-dandy grappling hook turns any passing car into an instant parasail adventure. This utterly amusing "float/fly/fall anywhere" mechanic may be completely ludicrous, but then again, I don't play videogames for a healthy dose of reality.

Although this surreal chute takes a project rocketing towards indistinguishable mundanity and endows it with "weekend rental" status, there's no denying that the other elements of the Just Cause experience don't fly nearly as high. In every respect, the game gives off a janky, loose energy with its biggest problems being underlying, pervasive ones—it just can't shake the feeling of being globally low-rent and poorly focused.

Besides things like sketchy vehicle handling and the occasionally unclear objective, a larger, more central example would be the way the back of the box proudly proclaims "250,000 acres to explore." I'm not sure if this is the largest game world ever created in terms of square footage, but what I do know is that the available area is far too large to serve any entertaining purpose. The lions' share of this territory is empty, hilly forest with absolutely nothing going on, existing only to be crossed. If the developers hadn't included the useful "extraction" feature that warps Rico from one place to another, the game would be unplayable from sheer boredom.

Likewise, the package also states "303 missions to accomplish", but the majority are simplistic, Xeroxed forays into tedium. The character models are clunky, the storyline is instantly forgettable, and the enemy AI vacillates between being stupidly brainless for on-foot soldiers and absurdly, impossibly aggressive for enemies in vehicles.

It's questionable whether or not a tighter design and more attention to detail could have elevated Just Cause past a me-too status at best, but it couldn't have hurt. As an admirer of all things unusual and unusually entertaining, Rico's bizarre parachute tricks justify the four to six hours it takes to complete the campaign, but once the novelty wears off, there's not much here to merit a second glance that hasn't been done better by other games—mission accomplished, but just barely. Rating: 5.0 out of 10.

Disclaimer: This review is based on the Microsoft Xbox 360 version of the game.

Parents should be aware that the bulk of the action here consists of mowing down endless amounts of enemy soldiers and blowing up oncoming vehicles. Although the graphics are not sophisticated or even explicit, the violence of attacking and killing people is clear and unmistakable. Several missions also revolve around cocaine and drug money, so be aware of that content as well. The rest of the ESRB's warnings are negligible as far as I'm concerned, but there's no doubt that this game is aimed at a mature audience.

Sandbox gamers or fans of GTA might want to check the game out if they have to play absolutely every entry in the genre but it's not as well-constructed as Rockstar's own, the campaign is over in a handful of hours, and the side missions are too repetitive and basic to be much fun. Although I got a great deal of enjoyment out of the parachute, I'm not going to say that one element alone justifies a purchase. A rental maybe, but not a purchase.

Deaf and Hard of Hearing gamers have access to subtitles available in the options menu, and Avalanche did a good job of making sure that all communication was accessible. Although most relevant information is relayed onscreen, there are a few times when the ability to hear auditory cues (such as nearby gunfire or helicopters overhead) can be slightly beneficial. It's not enough to hinder playing the game or detract from the overall experience, but it's something to be aware of.

eThanks for the review Brad. I was interested in this game initially, but after reading this I’m going to hold off on it until it hits the bargain bin. The general consensus seems to be parachuting and grappling is fun, but it doesn’t seem to overpower the game’s faults.

I don’t think the parachute is the only thing with potential about the game – the setting could have been a really neat departure from the usual primarily urban environments of the GTA games and their clones. Unfortunately, as you say, it’s so low on interesting things to do and places to explore that it winds up being a slog. I did also like the “liberation” missions, at least in theory. They needed to be substantially more varied, but taking over territory is pretty rewarding to me. I’d also mention that the vehicles didn’t handle very well and the AI… Read more »