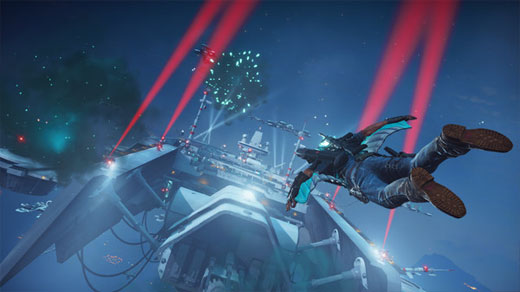 HIGH It's an infinite-use jetpack!

LOW Always turning too slow to shoot drones behind me.

WTF Why are targets only highlighted sometimes??

There are few absolute certainties in life. In fact, just three. Death, taxes, and the fact that jetpacks make any game better.

The first noteworthy DLC for Just Cause 3 is here and it's available as part of trio of content chunks, though only the first is playable right now. Called Sky Fortress, it's a series of brief missions which begin by giving main character Rico Rodriguez a jet engine attachment for his wingsuit. Once he straps it on, he can basically fly anywhere he wants without limit.

Since adding a jetpack makes anything better, it's no surprise that being able to zoom to any destination on the map without hijacking a vehicle or using the grappling hook to zip around elevates the entire Just Cause 3 experience. Just hold down a button, watch the jets fire up, and off Rico goes. And, as a nice bonus, the kit comes equipped with a machine gun and heat-seeking missiles for airborne assaults.

So the jetpack is undeniably awesome, but the rest of this DLC? It's really nothing to write home about.

The missions are fairly brief, and the whole questline can be wrapped in under two hours—and probably quicker, considering that most of my time was spent circling a giant enemy helicarrier while trying to locate targets scattered over, under, and within its hull.

Asking Rico to blow up a giant flying fortress seems like a foolproof recipe for excitement, but the craft just sits there and finding the targets is a lot harder than it should be.

Similar to how Rico "liberates" towns in the main campaign, he has to explode a certain number of things on the ship to advance the quest, but the objects are tiny, they blend in with the ship's surface, and they don't show up on the map. It's a purely visual search. It's also purely irritating.

Once the helicarrier is "liberated" a few easier challenges open up and it's a quick jog to the end of the content.

The story wraps with a nice little flourish and by the end Rico will add a few more unlocks to his repertoire—a futuristic energy rifle, some upgrades for the jetpack, and a bad-ass drone he can summon to rain hell down on enemy camps. It's not bad stuff, but there's no question that the only real reason to get this DLC is the jetpack.

Frankly speaking, I find Just Cause 3 to be a bloated, boring game full of wrong decisions and wasted potential, but there's no denying that strapping a rocket to Rico and owning the skies is pretty fabulous. It's not good enough to recommend buying the game, but for people who already own it, Sky Fortress is an absolute must-have. Rating: 7.5 out of 10

Disclosures: This game was obtained via publisher and reviewed on the PS4. Approximately 2 hours of play were devoted to the single-player mode, and the content was completed. There are no multiplayer modes.

Parents: According to the ESRB, this game contains: blood, intense violence, strong language. Despite the warnings, this game is pretty tame outside of a few specific instances, usually in cut-scenes. The violence around the open world is pretty over-the-top, with everything exploding or crumbling into pieces. Soldiers do get shot and there are loads of guns, so little ones should stay away, but overall, it's a little too cartoony to be too worried about.

Deaf & Hard of Hearing: All dialogue is subtitled and there are no significant auditory cues needed for play. It's fully accessible.

Remappable Controls: Camera controls can be inverted but otherwise the complicated control scheme is not customizable at all.