Screwing around on an epic scale 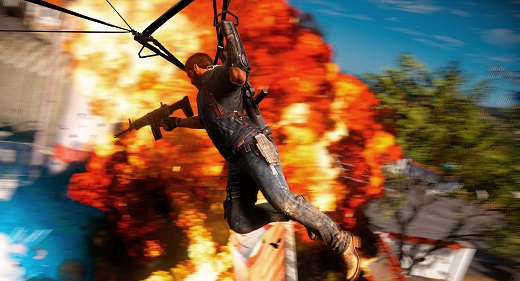 LOW The game design is identical to what it was five years ago.

WTF Fast travel in a world this huge is… a limited resource?

The amount of entertainment a player will get out of Just Cause 3 is directly related to how much they enjoy blowing stuff up in an open world. To be brutally reductive about it, that's basically all this game is, and there's not much else to say about it. But, since this is a review…

Narratively, there's a thin tale of freedom fighter Rico Rodriguez returning to his home to liberate it from a generic dictator. Apparently there's a power grab over a fictional resource on the island and… something something, blah blah blah. Look, the story is utterly forgettable, the characters are boring, and there's not many laughs. The plot is absolutely not a reason to come to Just Cause 3.

While the narrative is MIA, something that Just Cause 3 does well is let the player traverse an absurdly huge open world while making stuff go boom. Once past the tutorial missions, the player is set free in a massive territory, and there's no shortage of enemies to destroy, vehicles to smash or bridges to demolish. Whether using a rocket launcher, detonator charges, a million bullets or just about anything else, it all incinerates via beautiful fireballs and glorious smoke clouds.

Another thing Just Cause 3 excels at is making the simple act of traversal amazingly entertaining… for a while.

Like he did in Just Cause 2, Rico has a physics-defying grappling hook and a magical parachute. For this sequel, the developers have added a wingsuit. By employing these items at any time and in any order, our hero is able to perform all sorts of impossible acrobatics, and doing so is kinetic excitement.

For example, it's typical to leap off a cliff, wingsuit to the ground, grapple forward and pop the chute to catch air, grapple again to grab a passing helicopter, hijack the chopper to blast a nearby base with missiles, wingsuit out while the chopper causes collateral damage in a crash, parachute back down onto a car speeding by, hijack the car and then do donuts in a field while reveling in the chaos – and all this in one sequence. It sounds like a cutscene, but it happens fluidly and with little effort, and constantly thumbing a nose at gravity is wild.

However, doing stunts like what I've just described – even as extreme as they sound – are only entertaining for so long. Once the novelty wears off, Just Cause 3 doesn't have much else to offer and the game gets really old, really fast.

More than anything else, the problem with Just Cause 3 is that the game's design is identical to what it was five years ago in Just Cause 2, and even then it was already tired. In fact, I actually went back to my review of that game, and everything I said about it still applies today. I could have literally copied and pasted the entire text, added the word ‘wingsuit' a few times, and it would have been fully accurate.

Anybody who's played an open-world game from the last generation will be instantly familiar with what's on offer here: Get an open-worldy mission from someone, go to a place and do that mission, and repeat. Despite Rico's aerial hijinks, the tasks assigned lack imagination and feel like things I've done a few dozen times before. Without strong characters or a solid plot, there's not much to chew on. When not on an official mission, there are a hojillion areas to ‘liberate' from enemies, which involves blowing up X number of items at each base or city. It's all pretty stale.

Another example of the design's datedness is the level-up system. Several of Rico's attributes can be upgraded, but in order to improve them, the player must go to specific "challenge" points and do activities that are sectioned off from the world he's in. A more natural and modern idea would have been to let Rico level up as he's doing activities in the world, rather than requiring a player to go to a certain place and load up a structured challenge. Oh, and about those loading times… They're absolutely awful.

When starting, it regularly takes two or three minutes to get into the game, and every time the player fast travels to a new location, it's at least another thirty seconds (or more) of downtime. It's lucky Rico is so tough, because reloading after a death takes a big chunk of time as well. The loads are especially maddening when doing challenges because they demand precision, and if the score isn't high enough, it's at least another thirty seconds to re-load and try again, every single time. The lessons of reducing frustration by getting the player back in the game right away ala Trials HD or Super Meat Boy are well-known to developers by this point, and failing to implement similar really hurts.

Just Cause 3 may offer a metric ton of content, a ridiculously huge world to roam, and some unbelievable aerial acrobatics, but none of those things are enough to save the day because the writing is phoned in and the game's core is too rooted in the last generation. Apart from the traversal, everything here has been covered time and time and time again, and it absolutely wheezes without anything more interesting to sustain a player over the long haul. For those who want nothing more than to run around and cause mayhem, Just Cause 3 gets the job done. Anyone looking for more substance should grapple onto a different title and wingsuit away. Rating: 6 out of 10


Disclosures: This game was obtained via publisher and reviewed on the PS4. Approximately 10 hours of play were devoted to the single-player mode, and the game was not completed. There are no multiplayer modes.

Parents: According to the ESRB, this game contains: Blood, Intense Violence, Strong Language. Despite the warnings, this game is pretty tame outside of a few specific instances, usually in cutscenes. The violence around the open world is pretty over-the-top, with everything exploding or crumbling into pieces. Soldiers do get shot and there are loads of guns, so little ones should stay away, but overall, it's a little too cartoony to be too worried about.

Deaf & Hard of Hearing Gamers: All dialogue is subtitled and there are no significant auditory cues needed for play. It's fully accessible.

Brad, i’d argue that after 10 hours of play, that you did complete the game. Maybe twice already.

“It sounds like a cutscene, but it happens fluidly and with little effort”

Little effort? Seriously? I hope that means the controls have been improved tremendously because Just Cause 2 was unplayable for me. Everyone was so excited about that grappling hook that I had to try it. But I kept missing my target, falling off buildings and falling of whatever vehicle I was in because I was unable to properly drive/fly it. Mainly the falling off buildings part: it was simply impossible for me to use the grappling hook climb on something.