A Nice Place to Visit, but… 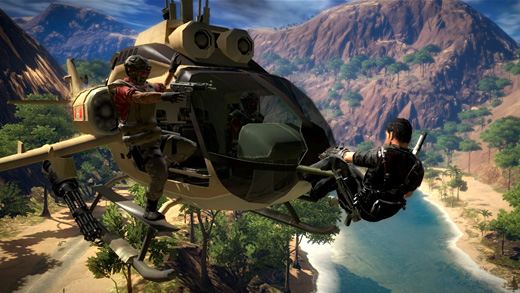 LOW The sheer number of missions to finish before credits roll.

WTF Falling 10,000 feet and grappling towards the ground for safety.

A perfect example of a title that starts with a bang and ends with a tired, worn-out groan of exhaustion, Just Cause 2 from Avalanche Studios should have everything it needs to be a top-tier blockbuster—plenty of action, great looks, and lots of opportunity for players to get crazy. A valiant effort was certainly made here, but thanks to a few misguided decisions in key areas, its full potential ends up sabotaged.

Coming four years after the first, Just Cause 2 sends special operative Rico Rodriguez to the fictional island of Panau to do… something. The plot tries to tell the story of a dictator and three factions trying to wrest control from him, but none of it amounts to much. In fact, I found it difficult to remember the story at all since Rico barely has a personality, and the other characters don't fare any better.

The scripted action is about as memorable as the characters. From a design perspective, the game is built on the standard open-world formula that's been in use since it came barreling to the forefront with Grand Theft Auto III. Players choose from a variety of available missions to progress the campaign, and when not occupied with those, the game's world is open to exploration, free-form havoc-wreaking, and icon collecting. It all feels extremely familiar and wouldn't be noteworthy except for three things that define the Just Cause 2 experience: Rico's grappling hook, his parachute, and the island itself.

Starting with the biggest element, the work Avalanche has done in creating Panau is jaw-dropping. It's stupefying. It's absolutely amazing. It's not often that graphics can make me stop and stare dumbly in wonder, but the artists responsible for the island's snowy, mist-covered peaks, its stinging sunset deserts, its lush jungles, and the thousands of small touches that bring it all to life should pat themselves on the back and take the next year off —I can say with confidence that I've never seen anything quite like it. Every few minutes, I found myself surprised by the incredibly beautiful environmental work and obvious attention to minutiae that must have been absolutely painstaking to realize. It's simply stunning.

On the other hand, as wondrous as it is, there's precious little rationale for making the territory so enormously, ridiculously large. Massive to the point of requiring several minutes of flight to get to some places, once the "wow" factor dims, it's hard to miss that there's not much happening in the too-vast expanses between missions. As someone not prone to exploring every inch of territory for trivial collectibles, the only thing the actual size of Panau added for me was too much travel time. 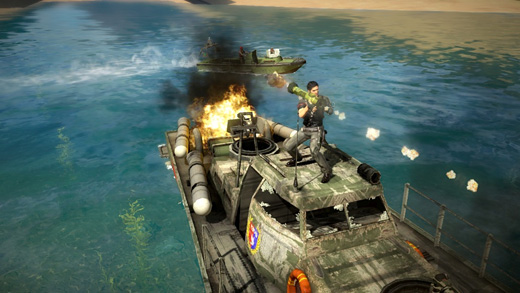 Getting back to the good, Just Cause 2 can boast the best grappling hook I've ever seen. Better than Bionic Commando's wire (both original and revamped), better than the hook in Lost Planet, eclipsing Spider-Man's web ability and achieving something several orders of magnitude more potent than Link's Hookshot, the grapple in Just Cause 2 is both incredibly versatile and incredibly entertaining. Able to attach to any surface with a range and accuracy that's perfectly absurd, players can accomplish just about anything that they can imagine with it —whether it's pulling snipers down from perches, dragging enemies behind moving vehicles, or catapulting up to a helicopter in flight and tossing the pilot out, this handy tool does it all.

The hook is a license for madness, but in conjunction with Rico's magic parachute, the formula becomes truly golden. Able to deploy at a moment's notice and infinitely re-usable, the chute gives the player license to commit ludicrous acts without fear of any repercussions. Aside from simply slowing falls after jumping out of planes, this bit of silk also acts as a makeshift mode of transportation—by "slingshotting" himself forward with the grapple, Rico can take to the skies and glide (or climb) over terrain at will. He's also free to base jump off of absolutely anything, and raining death from above is possible in nearly any situation.

After the things I've just described, my previous statement about "forgettable action" may seem contradictory. However, I'm sad to say that the objectives and missions in Just Cause 2 fail to take advantage of its best qualities. In essence, nearly all of the missions could easily fit into any other open-world game without much difficulty. Things like driving a VIP from one point to another, blowing something up, or hijacking a vehicle and hustling to a specific location are all tasks that don't require the special talents of Rico Rodriguez. The player may have a character that's unusually mobile and able to capitalize on vertical elements, but it feels like there's very little imagination at work here.

The mediocre action is bad enough, but making things worse is the fact that the game brutally overstays its welcome. While putting Rico through his paces and exploring the environment is engaging for a while, those who just want to finish the campaign will have to go through much blandness before the end. Mission after mission after mission after mission for Panau's three factions will need to be completed in order to generate enough "chaos" to unlock the central campaign stages, and just when it seems like the game is about to be over, there are still more. The kinetic thrill of the grapple/parachute combo sustained me for quite a while, but there was simply too much game to get through. By the time credits rolled, I had racked up fifteen hours, but Just Cause 2 had started feeling stale somewhere around eight or ten.

Although it's hard not to fall in love with the landscape, the grappling hook, and the parachute, their combined appeal just isn't strong enough to override the bloated playtime, the dull cast of characters, and missions that are only mediocre at best. Like many exotic locales frequented by tourists, Panau is a great place to visit, but I doubt many players will want to live there. Rating: 6.5 out of 10.

Disclosures: This game was obtained via publisher and reviewed on the Xbox 360. Approximately 15 hours of play were devoted to the single-player mode, and the game was completed. There are no multiplayer modes.

Parents: According to the ESRB, this game contains blood, violence, drug references, language and sexual themes. Although there are times when I feel as though games get a rating that's too high, in this case, the "M" is well-deserved. Rather than go into detail, I'll just say that this is a game that's definitely not appropriate for children under any circumstances, and would strongly recommend parents steer their young ones to play something else.

Deaf & Hard of Hearing: You shouldn't have any problems. All dialogue is accompanied by text subtitles, and the developers do a good job of including on-screen indicators for incoming fire, and so on. I didn't notice any issues that might be barriers to hearing-impaired gamers at all.

I can see how a professional reviewer would be less than enamored with Just Cause 2. When your job duties demand that you complete a many games as possible, an immense, leisurely paced time-killer Like Just Cause 2 probably seem like a massive pain in the ass. But for patient fans of sandbox action games, it doesn’t get any better. Brad’s praise for the game’s grappling/parachuting mechanics is on the mark. Even without a vehicle, getting around the Panau is fun and engaging. While the island is huge, fast travel is unlocked very early in the game, and the wide… Read more »

I think with this game it comes down to trying out the demo. If playing the demo left you wanting more, then you should get this game- the full game is pretty much exactly the same as the demo, except more, LOTS more.

Far Cry 2’s environments were definitely grittier and harsher, and the African environment much more brutal. I’m having a hard time motivating myself to go back to Far Cry 2 even though as I trudge through the attractive environments, eyes open for enemy troops, waiting for that last malaria pill to wear off, it’s a more intense experience. Just Cause 2, however, will be giving me many hours of fun in the weeks ahead. They just made it fun to play, and dialed the AI down just far enough to not be a terrible pain in the neck when you… Read more »

Nice comment aesquire. That is how I felt about Far Cry 2. I spent more time exploring the environment than playing the actual game.

@abfackeln: I think what you don’t like about the game is why it has been getting high ratings. The purpose *is* the over-the-top stuff. It’s a giant sandbox of destruction, though sometimes the game gets in the way, not allowing you to just have fun. The story isn’t really the point; tethering things together with the grapple and base jumping and blowing things up is the point. It’s not a perfect game by any means, but it’s a lot of fun if you like the sandbox style.

I had a 5 day rental with Just Cause 2 and only played it twice. There wasn’t a sense of purpose that drove me back to the game.

Once you get past the gimmicky over-the-topness of the game it is a very generic third person shooter. Very forgettable.

Why this game has been getting 9s on other sites is beyond me.