To start out tonight, I want to wish my son Rhys my most heartfelt, enthusiastic congratulations for finally getting into Monster Hunter Freedom Unite's G-Rank missions. It's official.

He's worked hard, put up with a ton of frustrations, taken dozens of defeats, and yet kept on going. Now, all of that effort has paid off and he's at the same level as his old man. These missions are some of the hardest in the entire series, so making it here is no small feat.

I couldn't be more proud.

Special thanks go out to @SilentHitoshura and the guys at the Monster Hunter Podcast for teaming up with us at various points and lending us their support. In the end, it really is a team effort.

Earlier today, I was fortunate enough to receive a code into the Journey Beta that's now available in limited quantities on the PSN network. I'm a huge fan of @ThatGameCompany's work, and Journey is definitely one of the upcoming download titles I've been looking forward to the most.

I am quite happy to report that it did not disappoint.

First things first, I think the concept of a "beta" is being perverted into meaning something that it doesn't—no offense to TGC since they are hardly the only people guilty of doing so, but this “beta” is for all intents and purposes, a misrepresented demo.

Now, with that issue off my chest, I can say with a clear conscience that Journey is moody, evocative, mysterious, and totally beautiful. Such work is par for the course for TGC, but I'll be damned if more than a small handful of developers out there are operating on this level. Amazing stuff.

The demo consists of the player's red-robed, highly stylized nomad character walking through what appears to be an endless desert and seeing what is (I assume) the ultimate destination of the journey—a tall mountain with a shining light erupting from its peak.

I don't want to spoil anything since (much like fl0w and Flower) discovery is part of the joy in playing, so I'll just say that the playable sections illustrate the character's ability to jump, the ability to "call", the mechanics of moving on to the next areas, and ends with the character arriving at a very ominous-looking structure—all of it text and dialogue-free.

The last thing I'll say? If there had been a "Pay $10 to keep playing now” button at the end of the demo, I would have hit it, and hit it hard. 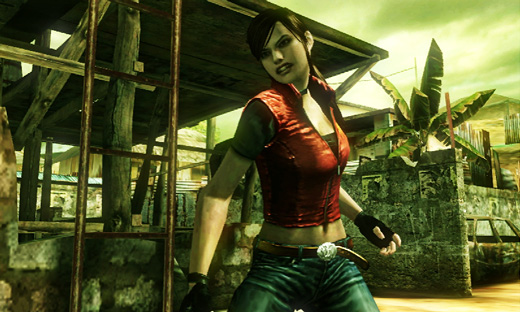 In more negative news, game circles have been buzzing about Capcom's recent decision to release their new 3DS Resident Evil title without the ability to reset data.

Essentially, when a player buys it new and starts progressing through the various modes, all of those stats and unlocks are hard-saved to the cartridge. That's all well and good, except for the fact that if the player wants to wipe the data and start fresh for any reason, it's not possible.

Why is this a problem?

Imagine all the times that you've deleted a save and went back to the beginning of a game to relive one of your favorite adventures from scratch, or when you've beat a game and cleared the memory so that a friend could play it. What about if you subscribe to a service like GameFly and it's your habit to clear the previous user's data before you put the game through its paces?

Any player who's been in the hobby for more than five minutes has certainly done one of these things, and it's hard for me to imagine this new "no resetting data, EVER" move to be perceived as anything other than an incredibly distasteful anti-consumer tactic designed to increase sales and put the kibosh on the used market.

Come on, Capcom… you've done some silly things in the past, but this? This is taking it a step too far.

Anyone who knows me knows that I am a huge fan of Twitter. There are a million reasons why, but today I just got one more to add to the list—where else could I possibly get a direct, personal response from my mostest favoritest author in the whole wide world?

That's right, today I got a tweet from @JoeLansdale hisownself, and the supersonic girlie squee-cry I emitted out of pure fanboy rapture could be heard three states away. Go ahead and laugh. I'm not ashamed.

Track some down and bring a friend along who'll step in and prevent you from eating the whole thing.

No data reset? Sometimes common sense just escapes these guys. Even in MMOs (where you have to pay money for them to keep your very valuable persistent data)… even they let you delete and start over. Games are run on computers (yes, consoles are computers) and computers have problems. We NEED the ability to backup, and start over. The benefits of this sort of restrictive data save system, seem minimal. WHile the potential downside seems much greater. The odd thing, is that Capcom puts these sorts of save restrictions into mass market casual games, like Dead Rising. And now Resident… Read more »