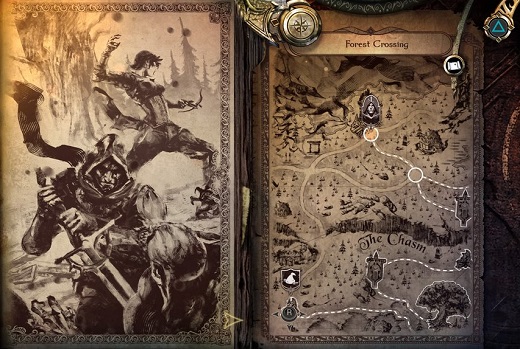 HIGH Figuring out the combat nuances and wiping out mobs.

LOW Hitting an impassable wall of difficulty after eight hours on Normal.

WTF Where are you when attacked during meditation??

Although I'd never heard of Joe Dever's Lone Wolf before, a cursory Google search reveals that it was a series of fantasy gamebooks and novels that were popular in the 80s. While its cachet might be lost on me, there must be enough fans out there who care enough about the series to warrant adapting it into video game format, and I'm glad it got done because it's great.

The game is split into two halves —it's one part text adventure, one part combat that relies on QTEs, cooldowns, and the sort of pleasant inventory management where items can be freely rearranged as the player desires. It's a small detail, perhaps, but a nice one.

The player takes on the role of Lone Wolf, a local lord who heads out to investigate rumors of disaster in one of his townships. Once he arrives on the scene, he discovers an army of nasty creatures has invaded for some dark purpose, so it's up to him to rescue the villagers, stop the evil plot and set things right.

The narrative is told via well-written brisk text, and in fact, the entire presentation overall looks very much like a book. Players start by reading through a few pages of story and then come to one of several occurrences, usually a choice to be made or combat to be had.

The choices are often interesting, and they tie back into the role-playing side of the game. Despite the fact that it's largely an adventure the player reads, Lone Wolf offers several stats and a great deal of equipment—melee weapons, ranged weapons, potions, rings, and so on. There are also four magic skills that must be chosen at the beginning, and depending on how Lone Wolf is kitted out, the options at each juncture can change.

For example, if the story says Lone Wolf is about to be ambushed, he can summon nearby animals to aid him if he has the animal kinship skill. If not, he can brute force through if his strength stat is high enough. Intelligence often shows a way out through careful observation, and so on. Avenues Lone Wolf can't choose will be greyed out, so there are frequently places where the player will see alternate paths that could've been taken if the character had been built differently.

Lone Wolf's build and stats don't only count for the text portions, of course… they matter a great deal during combat.

While the fights appear to be nothing but simple QTEs at first glance, they're actually deeper than that. Different consumables can be equipped on a belt for use during battle (things left in the ‘backpack' inventory are inaccessible) and the kinds of attacks vary depending on what's equipped in each of Lone Wolf's hands. Some can stun, some cause bleeding, some are pure damage, and more.

As skirmishes proceed, it's revealed that everything runs on cooldowns and energy meters, so attacking and defending require judicious use of stamina and power, else the hero be left out of breath with his shield lowered while waiting to recharge for the next attack. The same goes for magic or item use.

While it felt awkward and foreign at first, I began to appreciate this simple, yet satisfying system once I was able to develop a good rhythm. Small groups were simple matters, but tackling tougher enemies and bigger mobs was a bit like juggling—which enemy should be stunned? Is it safer to go for a few quick attacks or instill a bleed effect? Should I spend MP on my magic sword, or should I go for a mind blast and use the enemy's stagger time as a recovery period for my next attack?

Although it could use more transparency early on, I think this combat is a great counterpart to the adventure found in the text, and I was loving Lone Wolf until about halfway through.

Towards the end of chapter two (of four) I hit a severe wall of difficulty on the Normal setting. I had upgraded my armor and weapons all the way, but the enemies were too great in number and were doing too much damage. I just wasn't able to keep up, and I had no chance of defeating the boss. I was stuck, so I had to drop the difficulty down to Easy and restart the game from square one.

Part of the problem was that the stats and their effects aren't clearly explained, not to mention that Lone Wolf doesn't appear to be a game where grinding for EXP or gold should be necessary—it's a text adventure! Another serious issue was that the magic skills chosen when starting the game have an enormous effect on a player's success. If the wrong ones are selected (and there's no way to know which ones will be more useful than others) it can mean a whole lot of suffering down the road.

By the time I called it quits and started over, I'd sunk more than eight hours into it, and was incredibly irritated that so much time had been wasted. Such an issue is usually a quitworthy offense, resulting in a review written on blast. However, it's easy to see the overall quality of the work, with its only real sin being overzealous developers adding too much difficulty to a game that isn't built for it. Once I was on Easy, I was able to get back to seeing Lone Wolf at its best.

As a fan of text adventures, and especially those which hybridize themselves with action elements, I found Lone Wolf to be an excellent example of the genre when experienced under the proper conditions. The mix of reading, fighting, and item management all come together beautifully. However, there's no denying that the difficulty curve is way out of whack on Normal, and it's a nasty surprise that will catch prospective fans off-guard.

I still recommend Lone Wolf to players who enjoy text adventures, but only if they go into it with their eyes open. There's a great experience to be had here… Just make sure to take the proper steps needed to avoid the mid-game difficulty spike.  Rating: 8 out of 10

Disclosures: This game was obtained via publisher and reviewed on the PS4. Approximately 24 hours of play were devoted to the single-player mode (8 hours on Normal, 16 on Easy) and the game was completed. There are no multiplayer modes.

Parents: According to the ESRB, this game contains violence and blood. The game's content is typical fantasy fare, and the skirmishes are pretty bloodless and not very graphic except for a few finishing moves which show creatures being impaled. Even so, it's not very explicit or gory.

Deaf & Hard of Hearing: All information is relayed via text and there are no audio cues necessary for play. It's fully accessible.

Remappable Controls: Players will be rapidly tapping buttons and performing joystick motions to complete the QTEs, but be aware that the controls are not remappable in any way.

I actually read these books – or a couple at least – when I was 12! I’d moved into a new school and the kids I hung with were all into role-playing, which I “didn’t get” so took the reading route instead. I recently played Nier and really hated the text sections. There’s a huge disconnect when I’m playing a game and am expected to read something instead of the game showing me. However, if it’s text-based to begin with then I might be willing to give it a shot. Also, I wish more developers would think about “the small… Read more »